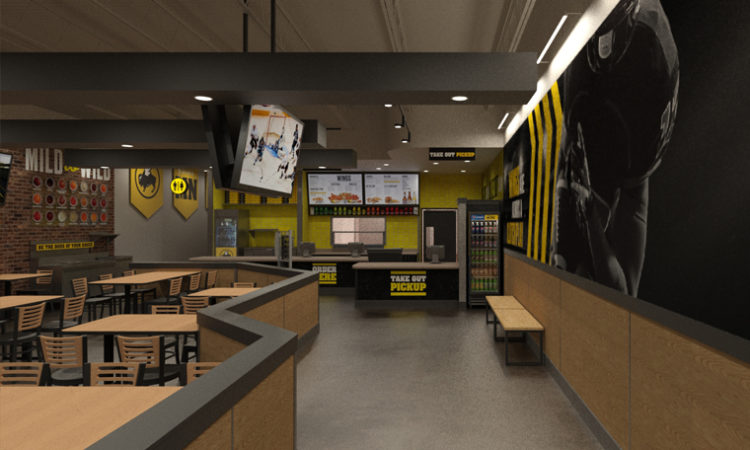 An inside look at the B-Dubs Express location in Edina. (Photo courtesy of Buffalo Wild Wings)

B-Dubs Express will premiere later this summer in Hopkins and Edina.
June 14, 2017

Buffalo Wild Wings on Wednesday unveiled a small-format concept of its restaurant that focuses on takeout rather than its current model around dining in while watching sports.

Two first two locations, known as B-Dubs Express, open later this summer in Hopkins and Edina. Both restaurants are closer in size to a Chipotle or Noodles & Company—just 2,500 square feet and seat between 35 to 50 people. A typical Buffalo Wild Wings is 6,100 square feet.

Like fast-casual restaurants, staff will take orders from a counter rather than waiting tables. Much of the menu will carry over from its full-scale restaurants, include wings and sauce flavors.

Customers will also have the option to order chicken tenders, burgers and sandwiches, salads, as well as select shared plates and sides, Buffalo Wild Wings said. Draft and bottled beers, wine and adult beverages will also be available.

“These first two locations in Minnesota will provide a great opportunity for us to test an alternative format and gain learnings as we continue to look for ways to meet the changing needs of today’s customers,” Todd Kronebusch, vice president of market development for Buffalo Wild Wings, said in a statement.

Meanwhile, the Golden Valley-based restaurant chain said it is on the hunt for additional places in the U.S. to open its fast casual concept.

Despite making up less than one-tenth of the restaurant industry’s market share, fast casual restaurants have been on a sales growth streak as of late. According to the National Restaurant Association, sales at fast casual eateries are growing at nearly triple the pace of the restaurant industry as a whole. Meanwhile, Americans are also increasingly taking food home to eat. In its 2016 annual report, Buffalo Wild Wings said takeout comprised 17 percent of its sales at company-owned stores.

While CEO Sally Smith will oversee the launch of the Hopkins and Edina locations, she won’t be the one to determine if the model is a success or failure. At the company’s shareholder meeting earlier this month, Smith announced her intention to retire “later this year.”