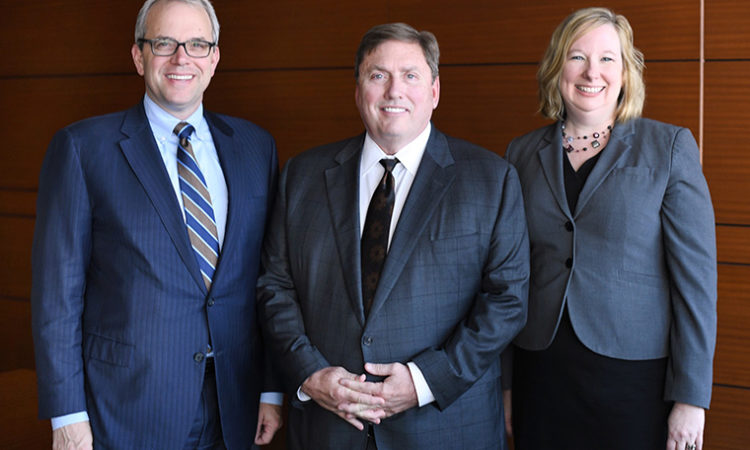 The combined firm will likely make more acquisitions over the next few years, leaders say.
By Dan Niepow
September 17, 2019

Before making the decision to merge with Taft Stettinius & Hollister LLP, Minneapolis law firm Briggs and Morgan had been in merger discussions with dozens of other firms, says Steve Ryan, Briggs’ president and managing partner.

But things were different when Briggs opened up merger talks with Taft two years ago. From the outset, the two firms found common ground in a number of areas — from office culture and business strategy to a shared focus on diversity.

About four months ago, Briggs paused discussions with all other merger candidates. Then, late last month, Briggs formally unveiled plans to merge with Taft. The two will operate under the Taft name.

“We realized we’d found the partner that was fulfilling all the items on our checklist,” Ryan says.

The combined firm expects to generate somewhere in the range of $350 million in annual revenue. On its own, Briggs logged annual revenue of about $82 million, while Taft pulled in more than $200 million a year.

The merger won’t result in any layoffs, leaders say. Instead, Briggs and Taft officials see the combination as part of a larger growth strategy.

“There are groups of firms that are consolidating and frankly shrinking their operation function,” says Ann Rainhart, Briggs’ chief operating officer. “We’re going in the opposite direction and really investing in the best talent.”

Briggs leaders say the merger won’t affect any existing clients. (The firm’s clients include the Minnesota Vikings and the Minnesota Twins.)

Briggs and Taft officials say they’re aiming to capture more business in the “upper-middle-market.” They’ll also aim to provide the same caliber of services clients have come to expect from pricier firms on the coasts.

Ryan says Briggs has often attracted lawyers who have honed their skills at prominent firms out east.

“We tend hire the exact same types of lawyers as the coasts do. We consider ourselves a blue-chip firm from the credential standpoint,” Ryan says. “We get the same level of sophistication and capabilities, but we don’t charge the same rate structure that’s required in New York City or Los Angeles.”

In addition to taking on new clients, leaders of the combined firm hope to grow by acquisition. Managing partner Bob Hicks says the firm is eyeing “two or three more markets … all in the Midwest.”

“We will do more mergers,” Hicks says. “But from a timing perspective, we do these very carefully and very deliberately.”