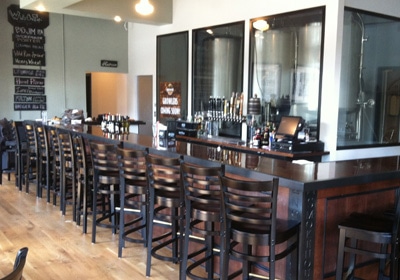 Brewpub that Offered “Free Beer for Life” Opens to Public

Northbound Smokehouse Brewpub, which has committed to giving a lifetime supply of beer to about 75 people who donated money to the business, opens Thursday.
September 28, 2012

The Minneapolis brewpub that last year grabbed the attention of local beer fans by offering investors free beer for life is about to open its doors to the public.

Co-owner and head brewer Jamie Robinson told Twin Cities Business on Tuesday that the business’ unique funding plan was a major success. The company offered three tiers of investment: Those who gave $1,000 received free beer for life, those who gave more than $1,000 but less than $5,000 received equity in the company; and those who invested at least $5,000 received both equity and a lifetime supply of beer.

The owners signed a lease last September and began raising funds that month. Robinson said that it took only three to four weeks to raise $250,000, and about 75 people are now eligible for free beer for life.

After raising funds, the owners obtained a $625,000 loan from the U.S. Small Business Administration and began renovating the former retail space to accommodate the brewpub. The building’s owner also contributed to the project, which cost more than $1 million, Robinson said.

The 76-seat restaurant, which will also feature about 60 seats on a patio during warmer months, will serve four year-round beers that are brewed on-site: an India pale ale that Robinson says contains stronger malt flavor than most hop-heavy IPAs on the market; a porter made with house-smoked grains; a honey wheat beer made with 50 pounds of honey per seven barrels for a strong honey aroma; and a pale ale.

The brewpub will also feature seasonal beers, including an amber ale made with wild rice, and six guest beers, Robinson said.