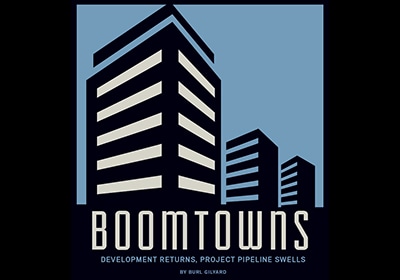 The lean years over, new projects are rising and more are planned.
November 01, 2014

While the overall economy remains a mixed bag, real estate development is back in business in the Twin Cities. Downtown Minneapolis draws the most attention—with projects including the new Vikings stadium, the Downtown East redevelopment and new apartments everywhere—but there are projects underway all across the metro.

There’s a wide range of commercial development—industrial, office, retail, hotel and medical office—under construction and on the horizon throughout the core seven-county metro area. At the same time, the building boom for apartments continues unabated, and some developers are even starting to chase for-sale condominium projects.

Not every office project is a brand-new building. Minneapolis-based Hillcrest Development closed on its acquisition of the former administrative headquarters for the Minneapolis Public Schools at 807 Broadway St. NE in Minneapolis, a vintage building dating to 1914, in early September. While some might look at the building and see a large, old and unwieldy property, Hillcrest managing partner Scott Tankenoff sees an opportunity for new office space dubbed HighLight Center with “a nice open feel to it” to draw a range of tenants.

“We’re going to be repositioning that for creative office space,” says Tankenoff. “In Northeast Minneapolis, there’s not a lot of brick and timber that’s available.”

The rehabbed building and another small structure on the site will offer about 170,000 square feet of space, and tenants can begin moving there in early 2015, Tankenoff says. Northeast Minneapolis, he says, is a draw for businesses looking for lower rental rates and available parking, while still being close to downtown. This is Hillcrest’s bread and butter: renovating properties with challenges.

Hillcrest has its hands full with three big projects right now: the former school headquarters, an overhaul and future redevelopment of Pentagon Park in Edina, and the former NestlÃ© plant in St. Louis Park, an industrial project that Hillcrest is subdividing under the name Westside Center.

“In our core portfolio in Northeast Minneapolis, we have very little vacancy. We see this as a very strong submarket,” says Tankenoff of the former school headquarters. “This is renovated space with character, charm and a lot of great possibilities. What we’ve been seeing in Northeast is a lot of people who are in the creative industries, and they want a creative, fun space that’s attractive for their employees. It’s about having a workplace that actually promotes their culture.”

But most office projects in the pipeline are build-to-suit deals tailored to specific corporate users.

Liberty Property Trust, a Malvern, Pa.-based real estate investment trust with a large local portfolio, stopped construction of Liberty Plaza, a 120,000-square-foot office building in Eden Prairie, in 2008 and has yet to restart the project. For now, Dave Jellison, vice president and city manager with Liberty Property Trust, says that there are no plans to move ahead with the project on a speculative basis.

“I think we would not build a spec office building until the market was much, much different than it is today,” says Jellison. “You always think that next year is going to be the year. You’ve got to be an optimist to be in this business.”

The biggest retail news of the year was the opening of the Twin Cities Premium Outlets, a new 409,000-square-foot retail center in Eagan. Another category driving growth is grocers, as the shelf-space battle continues to be reshuffled. Edina-based Lund Food Holdings Inc. opened a new 51,000-square-foot Byerly’s store at 7171 France Ave. S. in Edina in September to replace an aging store at the site. Austin, Texas-based Whole Foods Market has inked a lease for a 45,000-square-foot store in Woodbury to open in 2017, which will be its seventh store in the Twin Cities.

The industrial market is the strongest category for commercial properties (see sidebar, bottom of this article). Even large national firms have looked to plant a shovel in the Twin Cities market. Dallas-based Trammell Crow Co. previously developed the 185,000-square-foot Midtown Business Center in Roseville, which was fully leased to St. Jude Medical. But the company is keeping a close eye on the local market.

Developers are still building apartment buildings, a trend that is increasingly spreading to the suburbs. Trammell Crow currently has apartment projects under construction in Minnetonka and Golden Valley.

Minneapolis-based Marquette Advisors estimates that nearly 5,000 new apartment units will open across the metro during 2014. That’s an 80 percent increase from the 2,763 new rental units that opened in 2013, according to data tracked by Marquette. Overall, the report noted, “demand for apartments in the Twin Cities remains robust.”

At the end of June, Marquette Advisors reported that the apartment vacancy rate remained low across the Twin Cities at 2.6 percent, but was higher in some markets that have seen intense development. In downtown Minneapolis, for example, the vacancy rate had climbed to 5.7 percent at the end of the second quarter. A vacancy rate of 5 percent is generally considered the rental market’s equilibrium point, which balances the financial interests of renters and apartment owners.

After years of little new development, there are now projects under construction that will add more than 1,000 new hotel rooms to the metro.

“The current market is really strong. Both Minneapolis and Bloomington are about as strong as they’ve ever been. The recovery has been pretty impressive,” says Steve Sherf, president of Excelsior-based Hospitality Consulting Group. “It’s been a long time since we’ve had that much development going on at once. The hotel industry is back, and so people are building.”

Sherf is confident that the new hotels in the market are in tune with demand and is not worried that the hotel market is being overbuilt. Another factor in play, he notes, is that some aging hotels should likely be replaced: “Any hotel that’s probably 15 or 20 years old should be threatened by the new facilities,” Sherf adds.

The medical office market is also healthy. Bloomington-based Cushman & Wakefield/NorthMarq was tracking roughly 950,000 square feet of medical projects under construction at the end of June.

Brown sees a lot of the current projects driven by larger changes to the health care landscape. Health care providers are seeking efficiency, but also seeing that the delivery model is changing. The bottom line? Health providers want clinics and other health care facilities that are more accessible to patients, but may not be part of large, hospital-anchored campuses.

“We’re in a market right now that is in transition,” says Brown. “A lot of the health care systems are adjusting. It’s just a dynamic time.”

Burl Gilyard is a senior writer at Twin Cities Business.

Warehouses on the Rise

The Twin Cities is an increasingly hot market for industrial investments, and demand is growing for high-ceilinged warehouses.

Like baseball, in commercial real estate it’s all about “the fundamentals.” And right now, the Twin Cities’ industrial market has them in spades.

Demand, pricing, capital, interest. Those fundamentals have come together this year to produce a booming market for the development of a new generation of high-ceilinged, “low-finish” warehouse buildings—not only in traditional suburban markets such as Rogers and Shakopee but also in redeveloped areas closer to the Minneapolis-St. Paul core.

A recovering economy, companies looking to make their distribution systems more efficient and a flood of interest in the Twin Cities from institutional capital from around the world are teaming up to spur the warehouse building boom here.

Another big factor is that after 20 years of catering mostly to the medical technology industry, which generally wants one-story, “high-finish” warehouses with low ceilings, the Twin Cities’ market had a serious lack of what most tenants are looking for now—warehouses that rise rather than spread out. In a business where users pay based on the amount of square footage on the ground, they’re looking to go higher on a smaller footprint.

As of the second quarter of this year, there were more than 2 million square feet of industrial space under construction, according to Colliers International—the most at any one time in recent memory. Nearly all of the space features “clear heights” of at least 24 feet, which has emerged as the new minimum standard. Some of the new buildings are going as high as 32 feet.

“If you look at a distribution company, if you had 300,000 square feet over a 14-foot clear height, that’s a lot of back-and-forth, and it’s a lot of movement across floor space,” says Judd Welliver, an investment broker for CBRE, who specializes in industrial properties. “You’re paying for the ground-floor square footage, you’re not paying for vertical space. If you’re able to put that same operation into 200,000 square feet, not only are you going to be more efficient from the movement standpoint, but it should be cost-effective, too.”

Some of the new warehouse space is being built on a build-to-suit basis. For instance, Duke Realty has launched a new 118-acre industrial park in Otsego called Gateway North Business Center where it is constructing huge new distribution centers for Room & Board and Ruan Transportation. United Properties forged a deal for an 180,000-square-foot office/warehouse for Wurth Adams in Brooklyn Park, and Scannell Properties is constructing a 315,000-square-foot facility for FedEx in Rogers.

But in an even more impressive testament to the strength of the local industrial market, there is also a big spurt of new development happening “on spec,” in which developers such as Duke, United Properties, First Industrial and Liberty Property Trust build without signed tenants, confident the demand is such that the project will be leased up within a year or two of opening.

As an investment pro, Welliver says local developers are getting financing because the Twin Cities has emerged as a popular destination for worldwide real estate capital.

“Global markets have gotten extremely pricey and competitive, so people are looking to place capital in other good markets,” he says. “Minneapolis, compared to other secondary markets, is very high on the list. We have a lot of things going for us. We have Fortune 500 companies, we have a low unemployment rate, our space markets are doing very well. There are some big, big household names that are looking to come here. It’s pretty amazing.”

Northern Stacks in Fridley is an example of a high-profile spec industrial project that got underway this past summer. In that $100 million effort, Hyde Development is redeveloping a polluted former defense contracting site into a business park with two office-warehouse buildings totaling 348,000 square feet.

“There’s an awful lot of capital out there, and what the capital is chasing are the low-finish bulk warehouse buildings,” says principal Paul Hyde. “Why? It’s because they survived the recession well as an investment type. You have a low cost of replacing tenants. If one goes bankrupt and moves out, you don’t have to put in new capital to redesign a floor for the next one.”

The fact that the Twin Cities market had little existing modern product to buy has led financiers to back the construction of new space, he says.

But there’s a potential down side, he adds: “Because this is being driven by capital, rather than purely by demand, you need to have some caution. I don’t know if we’ll see enough tenants for all the new buildings that people keep proposing. But over time, if the economy keeps improving, I suspect they’ll end up getting absorbed.”