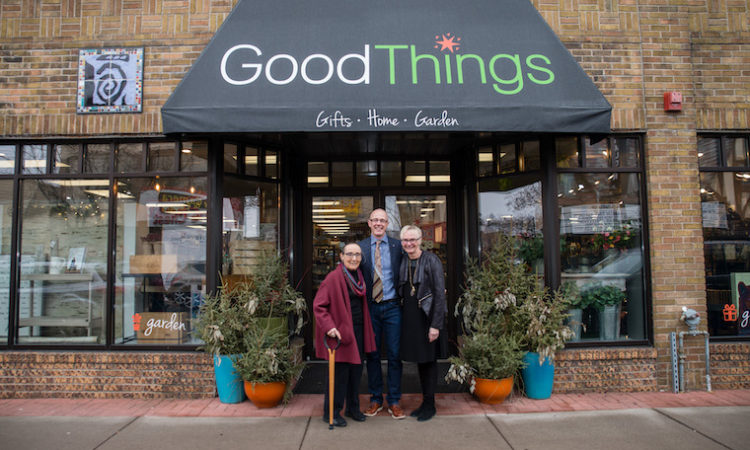 One of the Twin Cities’ most enduring retail institutions, Bibelot Shops, will live on after founder Roxana Freese’s retirement. GoodThings, another long-running, woman-founded local neighborhood business, is taking over the brand and reimagining its top two stores.

GoodThings, a family-led company with stores in White Bear Lake and Maple Grove, plans to renovate the Bibelot Shops on Grand Avenue in St. Paul and Linden Hills in Minneapolis. The St. Anthony Park and Northeast Minneapolis Bibelot Shops will close. The Bibelot name will live on during the transition and the two Bibelot locations will “reopen” in September as GoodThings.

“It’s a natural fit,” says Tyler Conrad, GoodThings co-owner. He runs the business with his mom, Sharon Conrad, who founded GoodThings 43 years ago. That was a decade after Freese blazed the trail with Bibelot, but like Freese, Conrad had to get her father to co-sign her business loan because banks wouldn’t give money to women. GoodThings, like Bibelot, specializes in gifts and women’s apparel. “Both stores were founded by local business women who were ahead of their time in sourcing distinctive, local, handmade, and environmentally responsible goods,” Conrad says.

The two local retailers had a longstanding handshake agreement to respect each other’s territory. But the Conrads have long been interested in expansion. They immediately saw the potential when Freese, who is 86, announced in November plans to retire and close her chain of four stores.

“We’ve always been looking for the right opportunity in St. Paul,” Tyler Conrad says. “I’m a believer that if you look long enough, hard enough, it will finally come true.”

Details of the purchase were not disclosed. Conrad says GoodThings will take over the Bibelot lease in Linden Hills. On Grand Avenue, the Bibelot store straddles two buildings, one of which was owned by Freese.

“This is really a family to family deal,” Conrad says. “Our families are so similar in the way we take care of employees and customers. The biggest thing for Roxy was wanting to keep people employed. This way, she doesn’t have to shut everything down.”

As they look toward updating the Bibelot Shops, the Conrads are mindful of the 53 years of heritage. “We’re committed to combining the best of Bibleot and the best of Goodthings to carry on the legacy of offering the Twin Cities’ best selection of treasured gifts, clothing, and home dÃ©cor.”

But Bibelot shoppers will notice updates, to both store design and merchandise. “We’re a little more innovative,” Conrad says. “Everything needs a refresh from time to time.”

The Bibelot Retirement Sale will continue for the next several weeks and Bibelot-brand gift cards will be accepted through Thursday, Feb. 28. GoodThings plans an April 13 event to announce the merger to customers ahead of the full rebranding in the fall.

Neither local retailer sells online, and that won’t change with this expansion. “We’ve been successful for 45 years,” Conrad says of GoodThings. “Customer experience is the key. Our customers are our friends. People need that connection. They want to shop local. We’re going to focus on that spirit.”