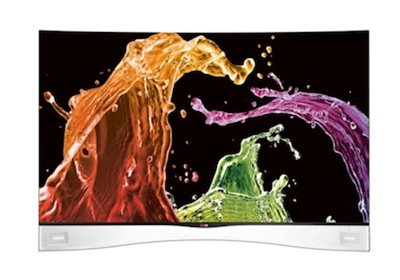 With a suggested price of $14,999, the 55-inch, concave-screened LG curved OLED TV is 0.17 inches thick and weighs less than 38 pounds. It made its U.S. retail debut on Monday at a Richfield Best Buy launch event. The TV, which is also the first to receive THX Display Certification, a designation that means its picture quality is of professional post production display caliber, will be sold at select Best Buy stores in Los Angeles, New York, Miami, Houston, Dallas, San Francisco, Chicago, Seattle, and San Antonio, in addition to the Richfield store.

LG Electronics USA—an Englewood Cliffs, New Jersey-based subsidiary of the South Korean electronics manufacturer LG Electronics, Inc.—introduced the OLED (which stands for “organic light-emitting diode”) TV to the U.S. market after it had been available to Korean customers since April.

According to the Star Tribune, LG Electronics has been competing with Seoul, South Korea-based Samsung Electronics Company—which also manufactures OLED TVs—to expand outside the Korean market and increase production of OLED TVs to a volume where it can profitably offer them for sale.

News that Best Buy is hosting the U.S. debut of the HDTV comes after the retailer announced several other initiatives, including “store-within-a-store” partnerships with Microsoft and Samsung, and an iPhone trade-in program.

While Best Buy declined to disclose sales estimates to the Star Tribune, Mike Mohan, president of Best Buy’s home products, told the newspaper the addition of the LG OLED TV is an innovative step for the electronics retailer.

“Consumers expect Best Buy to have the latest and greatest,” Mohan told the Star Tribune. “It’s less about price than about the consumer’s ability to see something they’ve never seen before.”

Best Buy is among Minnesota’s five-largest public companies based on revenue, which totaled $49.6 billion for the 2013 fiscal year that ended in February.