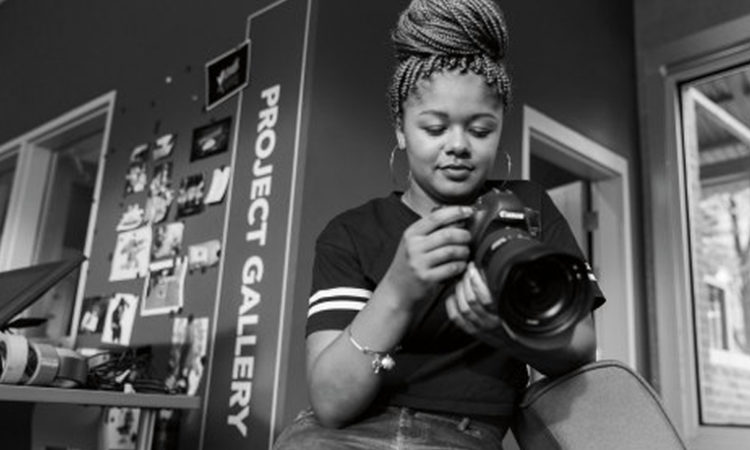 15-year-old photographer Naje, a participant of the Teen Tech Center program in Minneapolis, will be featured in Best Buy's new media campaign to promote the program. (Photo courtesy of: Best Buy)

Teens using technology with a purpose will be the focus of a new Best Buy social awareness campaign. The tech retailer plans to shine a light on teens around the country who are participating in Best Buy’s Teen Tech Centers, a network of year-round programs dedicated to teaching technology skills to youth in underserved communities.

The programs take aim at the academic achievement gaps found in certain areas around the U.S. They also serve as a response to the shrinking workforce. As Best Buy points out: more than 80 percent of new jobs will require tech skills.

The hope is that the Teen Tech Centers will provide technology job training to more than 1 million teens each year by 2020.

“We believe it’s an important responsibility to help cultivate the next generation of inventors, engineers, developers, designers and entrepreneurs,” said Andrea Wood, head of social impact for Best Buy, in a statement. “When we support our young people, we also make a vital investment in the future of our communities, families, employees and business.”

The newly announced awareness campaign will call attention to this effort by focusing on three teens living in North Minneapolis, a neighborhood that suffers one of the largest achievement gaps nationwide. The three teens wrote and star in their own spoken word videos sharing their personal stories through the skills they learned at a Teen Tech Center.

One of the featured teens is Naje, a 15-year-old with a passion for photography and dreams of being an aerospace engineer. In her campaign video, she talks about how taking pictures allows her to escape the problems and pressures of her life and immerse herself in a blissful otherworld.

The second featured teen is 15-year-old Tez. Speaking in a rap-rhyme form, he shares how the Teen Tech Centers program is helping him work toward his dream of being a filmmaker.

The third is Letrell, a 17-year-old aspiring writer and singer. He talks about the work he’s put in so far toward becoming a musician, and what he hopes for his future.

News of the campaign comes after Best Buy announced that it will open 21 new Teen Tech Centers by September. The locations will provide area youth with year-round tech tools, training and mentorship, and offer post-high school career preparation and internship opportunities through a Career Pathways program.

This expansion is partly a result of a $20 million grant Best Buy contributed to the Best Buy Foundation to expand its youth support. A plan is in place to have 60 Centers open across the U.S., Canada and Mexico by 2020.