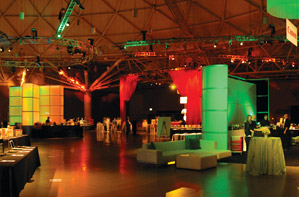 Since 1994, the Best Buy Charity Classic golf event has raised funds for the Best Buy Children’s Foundation. In 2008, the foundation introduced the @15 fund, which is focused exclusively on teens. The most recent two-day classic took place last June and raised almost $3 million for the foundation.

Events on the first day began with golfers in the Charity Classic tournament teeing off at the Golden Valley Country Club and golfers in the Partners Championship tournament teeing off at the Wilds Golf Club in Prior Lake. (The Charity Classic gives golfers the chance to play in a foursome with members of Best Buy’s leadership team, such as Chairman Dick Schulze, for $30,000. The Partners Championship pits foursomes against one another for a $7,500 entry fee.)

Best Buy vendors sponsored golf carts, holes, and gift bags, which included golf balls, a visor, a ball marker, and a Callaway gift card. Golfers ate box lunches on the courses, and the top foursome was presented at an awards ceremony in the late afternoon. Prizes were also awarded for the longest drive, putt, and other feats.

In the evening, a gala banquet at the Minneapolis Convention Center began with a silent auction and passed hors d’oeuvres from Kelber Catering, including filo tarts, pork pot stickers, pear brie and almond in filo, mushrooms stuffed with cream cheese and wild rice, and crab cakes with chipotle aioli.

The auction area was decked out in lounge style with standard bars and colored linens on cocktail tables. Best Buy vendors supplied more than 400 silent auction items, including a snowmobile, computers, appliances, travel packages, mobile phones, sports tickets, and autographed music memorabilia from Chris Isaak, Taylor Swift, Elton John, and others. Representatives of California-based Barefoot Wine ran a ring toss game where players paid for a chance to toss a ring on a bottle of wine and win the bottle.
Guests were then ushered into the ballroom for a plated dinner. Décor was minimal as the planners didn’t want the event budget to take away from the cause. Stephanie Tonsoni, corporate events manager for Best Buy, says @15 banners lined the stage and lighting was altered throughout the event to match the tone of what was happening.

Susan Hoff, chairman and CEO of the Best Buy Children’s Foundation, welcomed guests to the dinner, which offered something for everyone, starting with a salad of romaine lettuce and spiced pecans with citrus vinaigrette. Chicken sautéed with a sweet Thai cream sauce and topped with toasted pepitos was accompanied by a grilled petite tenderloin filet with roasted garlic sauce, parsley buttered new potatoes, baby green beans with red pepper matchsticks, and an orchid for garnish. The vegetarian entrée was a butternut squash ravioli served with a sweet Thai cream sauce, toasted pepitos, and accompanied by roasted vegetable Wellington. For dessert, guests had their choice of tuxedo cheesecake or turtle cake torte.

Brian Dunn, CEO of Best Buy, emceed the event. Entertainment kicked off with a set from Jordyn Shellhart, a 15-year-old Nashville recording artist. Next up was Chris Isaak, who wrapped up the evening with his signature rock and rockabilly songs.

On day two, golfers, teed off at the Wilds Golf Club in Prior Lake for the Charity Classic Tournament in the morning. The Partners Championship Tournament took place at Legends Golf Club in Prior Lake. Tonsoni says that on the second day of golf, the foursomes were paired with NCAA all-American women college golfers, who offered tips and advice. An awards ceremony followed the tournament in the late afternoon.

New this year was Fund-a-Run held at Phalen Regional Park in St. Paul on the morning of the second day. About 100 Best Buy employee runners and a few vendor partners participated in the 5k directed by Eagan-based Anderson Race Management. “We wanted to try something new this year and open it up to another audience,” Tonsoni says. Best Buy’s Children’s Foundation presented $10,000 to Bolder Options, a youth mentoring program in Minneapolis, as a result of the number of registered runners.

“Planning an event when you are fundraising at the same time is the biggest challenge,” Tonsoni says. “It’s trying to make things fun, exciting, look good, and streamlined, without going over budget and bringing in the most revenue you can for the foundation.”