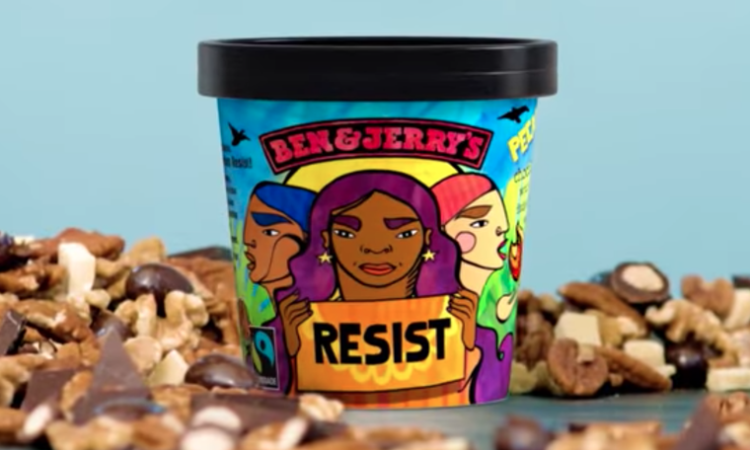 The limited-run flavor was launched recently as part of a campaign to lend publicity and financial support to four justice-based organizations, including Minnesota’s Honor the Earth, which is battling the Enbridge pipeline.
By Amanda Ostuni
November 16, 2018

A new, limited-run flavor of ice cream from Vermont-based Ben & Jerry’s is making its way to Minnesota on Friday with a mission in tow.

Named “Pecan Resist,” the company’s latest ice cream is steeped in a campaign to support four organizations of its choosing that are focused on social and economic justice. Callaway-based Honor the Earth, a local nonprofit building awareness and support for Indigenous people and their environment, was one of the four selected.

Pecan Resist first launched at a ceremony in Washington D.C. the day before Halloween, but on Friday Minnesotans will get their chance to sample the limited-run flavor at a ceremony at Calhoun Commons in Minneapolis.

While Honor the Earth has been tacking the needs of the Minnesota Native American community since it was established in 1993, today it keenly focused on stopping the building of the Enbridge Line 3 replacement pipeline.

In addition to the pipeline’s carbon impact, Line 3 has been controversial and drawn resistance from Honor the Earth and other organizations, as well as individual citizens arguing the pipeline disturbs Native American land and threatens the region’s water supply.

That’s why LaDuke is grateful for Ben & Jerry’s support, which in addition to Pecan Resist, also includes a donation of $25,000.

The money will go toward resources for the front line in Honor the Earth’s pipeline battle and related water protection efforts, including paying for lawyers. The ice cream— formally described as chocolate ice cream with white and dark fudge chunks, pecans, walnuts, and fudge-covered almonds – plays its own part, in more ways than one.

For starters, LaDuke notes that the name honors Native Americans, as “pecan” is the word for nut in the language of the Ojibwe, one of Minnesota’s groups of indigenous people, and that pecans in general are considered an indigenous nut.

Second, it draws attention to Honor the Earth’s fight.

“It shows a corporation is putting their money where their values are,” says LaDuke. “We’re grateful. Ben & Jerry’s is a great company. I’m proud.”

Ben & Jerry’s has a history of using its ice cream as a tool to stand behind sociopolitical issues. In 2009, it introduced the flavor Chubby Hubby to celebrate same sex marriage rights in its home state of Vermont. Chocolate Fudge Brownie was later renamed Food Fight Fudge Brownie to support GMO labeling, and in 2016, the flavor “EmpowerMint” was launched to promote voting rights.

Pecan Resist is actually the reinvention of an old flavor, New York Super Fudge Chunk. Ben & Jerry’s CEO Matthew McCarthy says, in a statement, that this current campaign is a way to counter the current administration’s “regressive agenda.”

The company views Honor the Earth as battling that agenda on the environmental front. The other organizations Ben & Jerry’s is honoring with its Pecan Resist flavor campaign (and with $25,000 donations each) are: Color of Change, which designs and leads campaigns championing justice for the black community; the Women’s March, which organizes events to encourage women to put their voice into politics; and Neta, a media platform led by people of color along the Texas-Mexico border.

“We couldn’t be prouder or more excited to support these four organizations that are doing incredible work every day,” says McCarthy. “We think it’s more important now than ever that citizens and businesses alike stand up and be counted.”

The Pecan Resist sampling event will be held at the Ben & Jerry’s in Calhoun Commons in Southwest Minneapolis (3070 Excelsior Blvd) from 4 to 6 p.m. November 16.

Representatives from Honor the Earth and MN350, a climate change activist organization, will be on site to discuss how people can join the pipeline battle, and of course, to enjoy the ice cream with the public.