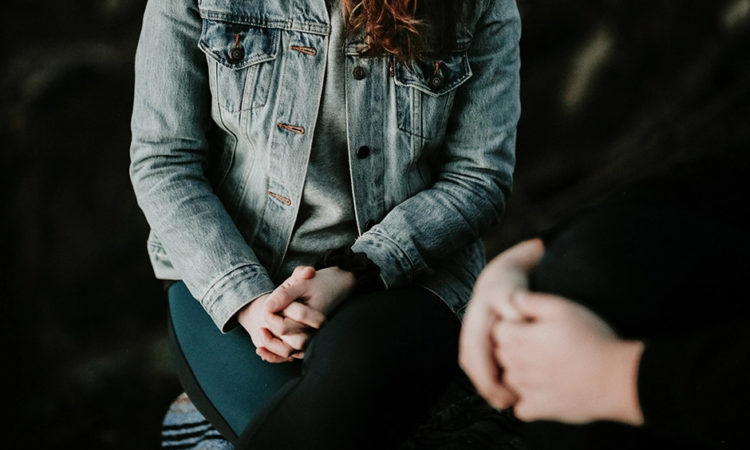 Community Reinforcement and Family Training helps family members learn to help their loved one without confrontation, detachment or having to choose between impossible extremes. Photo by Priscilla Du Preez via Unsplash

Starting this fall, the Center City-based addiction treatment giant will begin to emphasize a program called Community Reinforcement and Family Training that helps family members build skills that move beyond terms like “enabling” and “tough love.”
By Andy Steiner
October 18, 2022

Joseph Lee, president and CEO of Hazelden Betty Ford Foundation, knows better than anyone how addiction tears families apart. Because of that, he’s decided to shift his organization’s focus to a different way of supporting the loved ones of people with substance use disorder, one that’s focused on knitting families back together.

Starting this fall, the Center City-based addiction treatment giant will begin to emphasize a program called Community Reinforcement and Family Training (CRAFT) that helps family members build skills that move beyond terms like “enabling” and “tough love,” instead helping them learn to help their loved one without confrontation, detachment or having to choose between impossible extremes.

“We want to help more people and we want to help them have better outcomes,” Lee said. “One thing we know is when family members become engaged in the solution, people do better in treatment and beyond.”

The CRAFT approach to family education and support is a shift from a more confrontational model, where families are encouraged to “detach with love,” so that the alcoholic in their lives can learn from their own mistakes. While this approach remains at the core of Hazelden Betty Ford’s history and much of its programming, Lee said that it is also important for the organization to grow and adapt to serve the needs of all families and individuals.

“There has to be an evolution in the types of services we provide,” he said.

While he believes that healing can be found in peer-based groups, Lee said the CRAFT approach is evidence-based and backed by research studies that show a high rate of success in getting people to voluntarily enter addiction treatment while maintaining strong family ties.

“The science says that family members don’t have to stand on the sidelines,” Lee said. “Instead of just saying, ‘I didn’t cause it,’ dealing with the stigma or learning to say, ‘This is a medical condition,’ with CRAFT,  family members learn actual skills that can influence a bunch of different outcomes for their loved ones.”

This is a significant shift for Hazelden Betty Ford, Lee said, and it is an important one in the continuing evolution of the nonprofit: “We want to move the conversation from boundaries to education and connection and skill-building so families can continue to be part of the solution.”

The CRAFT approach, Lee added, gives families tools so they can influence change with love. He’d like to use Hazelden Betty Ford’s influence to help people understand the benefits of both approaches.

“I want to use that platform,” Lee said. “I want to send a message out to people in the treatment community. They look to us. I want to use this as a podium to say, ‘This is the way we want to go.’ We’re really excited about using this approach as a staple of our family program moving forward. We want to help families. We think we can make a big impact this way.”

He hopes that this move will spur a collaborative evolution across the national addiction treatment community, one that creates a new standard for family support and education. “Historically there’s been a gap between grassroots groups like Al-Anon and people who are more in this CRAFT camp,” Lee said. “I want create a bridge so that more people can experience this option in a good way.”

As evidence of Hazelden Betty Ford’s heightened interest in CRAFT, the program’s creators, Robert Meyers and Jane Ellen Smith, psychology professors at the University of New Mexico, will come to the Twin Cities in late October to lead a two-day training for a group of Hazelden Betty Ford staff members from across a number of departments.

Sarah Schwalbach, a licensed marriage and family therapist and Hazelden Family Program professional, is the first of the organization’s staff members to be CRAFT certified. At this month’s training, she said, “We are gathering the troops to talk about how we can implement CRAFT and use the spirit of CRAFT across all or our iterations with patients and families. We’re really excited about this.”

When he talks about Hazelden Betty Ford’s shift to CRAFT, Lee likes to emphasize that it has actually been going on for some time. “Over the past four years we’ve already adapted a number of CRAFT skills into our family programming,” he said. “We are already moving to a skills-based and experiential family experience, not just an education-based one.”

The new emphasis on family skill-building is a timely move, he said, one that melds the best parts of both approaches to create something that works for everyone.

“I think it’s an evolution,” Lee said. “It is a recognition that that Al-Anon is fantastic. A lot of people get help from them.” But, he added, Al-Anon has some limitations that CRAFT’s scientifically based approach does not. He’d like to show families that both approaches can work in concert: “We’ve had success with people doing both. When we use both skills, families have a community group through Al-Anon that they can go to for free. With CRAFT, they can use the skills they learn to navigate this experience.”

Schwalbach said CRAFT fills in some of the gaps created by the more commonly used approach to family support. “More traditional approaches can promote detachment or ultimatums,” she said. “CRAFT takes more of a, ‘Let’s lean into the relationship,’ approach. It encourages small, incremental growth and changes even if it is not fully what we’re hoping to see. How can we encourage our loved one to make small changes in a more healthy direction?”

This fall, Hazelden Betty Ford launched a virtual CRAFT-based family group called the Healthy Relationships Program. The intensive 10-week training, the organization’s first-ever CRAFT program for families, is, Schwalbach explained, “A very skills-based opportunity for families to learn more about CRAFT and how to implement it into their lives.”

Participants attend two hours of programming per week, and Schwalbach said one of the CRAFT skills is introduced at each session. The program has a cohort of 14 adults from around the country whose loved ones struggle with addiction. The cohort is intentionally kept small so that participants can support each other through the process. And one-on-one support is also included, Schwalbach said: “They have a weekly 30-minute coaching call with myself or one of my colleagues to talk about how they are applying what we are teaching in workshop into their own lives.”

While Hazelden Betty Ford’s family programming has always been focused on support, Schwalbach explained that this new CRAFT-based approach is different.  “We’re following a curriculum,” she said. “The Healthy Relationships Program is based on the CRAFT skills. It gives family members something tangible to come away with, some skills, some tangible pieces that they can use in their relationships. This feels like an important change, one that will really help support families and keep them together.”

Robert Meyers, CRAFT co-creator, knows from personal experience the pain of living in a family torn apart by addiction.  “I came from a home where my father was a heavy drinker,” he said. “He was not around a lot. My mother was histrionic and bipolar.”

Meyers left home when he was 17 to join the military. He ended up serving in the Vietnam War and experiencing his own struggles with addiction before studying psychology on the GI Bill. He created CRAFT in part as a response to what he saw as the more divisive approach to family support found in programs like Al-Anon or AA.

“The old Minnesota Model crap, that’s still what you see on TV with people yelling and screaming and calling each other names,” Meyers said. “Everything we do with CRAFT is with compassion, love and support. We can work with families and teach them how to approach someone who says, ‘Go to hell. I’m not going into treatment.’ We can get those same people to voluntarily go to treatment.”

The CRAFT program has been around since the late 1970s and has been used successfully around the world. But it took decades for it to take off in the United States, Meyers said. The Hazelden Betty Ford endorsement is a big vote of confidence that will boost CRAFT’s profile in this country.

The more confrontational intervention-based approach to family programming doesn’t work for everybody, Meyers said: “If people are confronted with all these people in a room who tell them all of the things they did that were horrible, do you think that is going to make them feel good?”

With its emphasis on keeping family bonds strong, CRAFT, Schwalbach said, is a “relationship-positive approach.” She’s added that she’s passionate about the program because, “It encourages family members to lean into the relationship, to leverage the influence they have as a family members, because they are the most influential people in their loved one’s life.”

Over the years, researchers have studied the gentler CRAFT approach and its success at getting people into treatment, Meyers added: “When they do studies with those people who’ve gone through a full-on intervention, they don’t even get 25% of them into treatment. With CRAFT, we get about 70% of the people who say, ‘I’m not going to treatment’ to go to treatment. That’s crazy-good stuff.”

Lee said that the central element of CRAFT’s “crazy-good stuff” is the education and skill-building it provides. That, combined with a more loving, family-based approach, has proven successful for many people.

“CRAFT is a therapy that is designed to build skills for what is called concerned significant others, or CSOs,” Lee said. “It helps the loved one get help. The CSOs learn skills to help their loved one get help as opposed to relying solely on intervention or power struggles to get there. It is a positive reinforcement skill set. It helps people get help.”