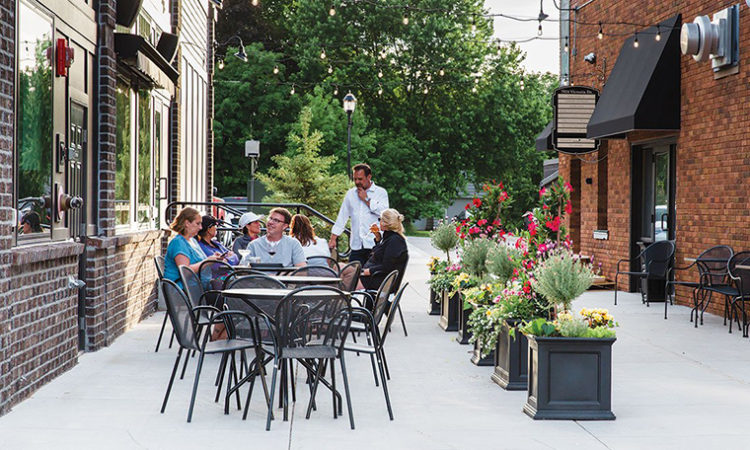 The Noble Lion in Victoria, Minn. (Photo by Ashley Sullivan)

Bars, Restaurants Get Green Light to Open for Outdoor Dining on June 1

Gyms and fitness centers will still remain closed.
By TCB Staff
May 20, 2020

Though indoor dining will still be prohibited, restaurants will be able to open for outdoor dining. Reservations will be required, too. In addition, restaurants will have a maximum capacity of 50. The changes, which leave many question marks for local restaurateurs, comes as part of the second phase of Walz’s plan to restart Minnesota’s economy.

Walz said he acknowledged the frustration among small business owners, but emphasized the restrictions are needed to slow the spread of the coronavirus.

“The virus won’t allow business as usual,” he said.

Scott Foster, partner and executive chef of the Nova Restaurant Group, said the changes may offer a “sliver of help” for some restaurateurs. But he argued that they’re not enough to stop many Minnesota restaurants from closing their doors permanently. Plenty of restaurants don’t have the infrastructure for outdoor dining, he noted.

“I guarantee you in the next week you will see a plethora of restaurants say, ‘I’m done,’” Foster said.

Leaders at Hospitality Minnesota, a trade group representing the state’s hospitality industry, expressed similar concerns. In a statement, the group said the announcement was “surprising and disappointing,” especially after industry leaders met with the Walz administration for a “hospitality roundtable” to hash out details for reopening.

“While it’s good for those restaurants that are able to offer outdoor seating, it will leave many behind around our state who cannot host patrons in an outdoor patio setting,” Hospitality Minnesota officials said in a statement. “Many of our operators have begun to hire back their staff to use their [Paycheck Protection Program] loan money and ordering products for reopening on June 1, so this is another disastrous setback for them.”

But Andrew Zimmern, chef and operator of Lucky Cricket in St. Louis Park, said the Walz administration is making the “best choice under the circumstances.”

“If we fail with this, it’s a death sentence for restaurants,” Zimmern said. “People will not come back if restaurants become a hotspot for transmission. We have one shot. I am shocked that people are negatively responding to an abundance of caution. If it’s another month and it means long-term success, what’s the problem?

Salons, meanwhile, will have the greenlight to resume limited operations on June 1. As with bars and restaurants, stylists will be able to serve clients on an appointment-only basis. Social distancing rules will still apply, and masks will be required for both workers and customers. Capacity will be limited to 25 percent.

Many salons have spent weeks preparing new safety protocols and will be ready to open June 1 at 25 percent capacity—that includes more space between chairs, biodegradable capes for customers, and masks and gloves for employees. Jon Charles, owner of an eponymous salon in Wayzata as well as Marty’s Barbershop at MartinPatrick 3, said the key will be “time and proximity.”

That means asking people getting a haircut to arrive at the salon with clean, wet hair or sending color clients home with wet hair, all to avoid face-to-face contact at the sink. Blowdries, which take concentrated time, will likely come at a higher charger—“or we just won’t do them,” Charles said.

The Walz administration plans to reopen the state’s economy in four stages. The first began with the expiration of the stay-at-home order on Monday, and this second phase starts June 1. More restrictions will be eased as part of the third and fourth phases, though the governor hasn’t outlined dates for these just yet.

“We don’t have timelines for every phase,” said Steve Grove, commissioner of the Minnesota Department of Employment and Economic Development. “We do have some phases that make logical sense from a public health perspective [and] from an economic perspective.”

“We have flattened the curve and we have prepared our hospitals and clinics with PPE and ventilators,” Gazelka tweeted. “We have to allow people to get back to their lives. If you can get a haircut, shop at a mall, or eat at a restaurant, you should be able to go to church.”