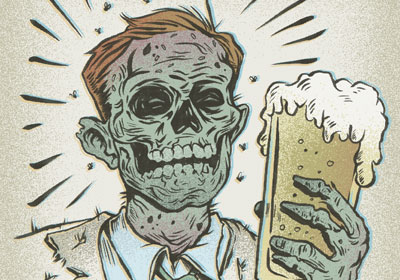 Despite huge crowds and a few broken glasses, the annual Zombie Pub Crawl is no nightmare for bar owners.
October 21, 2012

This Saturday, a horde of people dressed as zombies will roam Twin Cities streets as part of the eighth annual Zombie Pub Crawl, a bar hop that has proven to be quite lucrative for bars and restaurants.

The event, which will stretch this year from Minneapolis’ West Bank to St. Paul’s Midway Stadium, last year drew about 30,000 people who went from bar to bar in gruesome makeup, fake blood, and raggedy clothes.

Nearly 30 local bars, restaurants, and concert venues participate in the crawl. On that night, they serve only those who have bought tickets to the crawl and thus are wearing wristbands. And despite the hassles that come with a huge mob, it is an event that bar owners look forward to.

“They are here to drink and spend money,” said Russom Solomon, owner of one of the participating businesses, The Red Sea Bar and Restaurant on Cedar Avenue in Minneapolis. Solomon, whose bar has a capacity of 240, serves at least 2,000 people on the night of the crawl—inside the bar and outside in its parking lot, which is roped off for live performances and “best zombie” contests. The bar makes about 10 times the profit that night that it would on a regular weekend night, Solomon said.

On the night of the crawl, Solomon will increase staffing at his bar fivefold or sixfold, hire a few off-duty police officers, and “deal with a few broken glasses, but we’d never want to miss out on the opportunity.”

“It is our best night, period,” he said. “On our second-best night of the year—the night of the West Bank Music Festival—we only do a quarter of the sales.” New Year’s Eve? “Doesn’t even compare,” Solomon said.

The crawl started in 2005 with about 100 people wandering around a few blocks of northeast Minneapolis, dressed like zombies.

One of the organizers, Taylor Carik, said the crawl has since grown exponentially each year. Carik and four others have formed Zombie Productions, LLC, to organize the crawl; the company’s efforts include recruiting bars, attracting sponsorships, and hiring up to 40 off-duty police officers to control the crowd.

Nomad World Pub, also on Cedar Avenue, hires about 12 of its own security personnel to control the mob.

Owner Todd Smith says his bar offers a variety of craft beers, but the zombies are not show-offs. Most of the beers they buy are cheap, he noted—about $3.50 per bottle. And every October, after the crawl, Smith repaints the walls of his bar to get rid of the fake bloodstains.

Tickets to this year’s crawl are currently being sold on zombiepubcrawl.com for $22.99; the price will go up to $40 on Saturday.