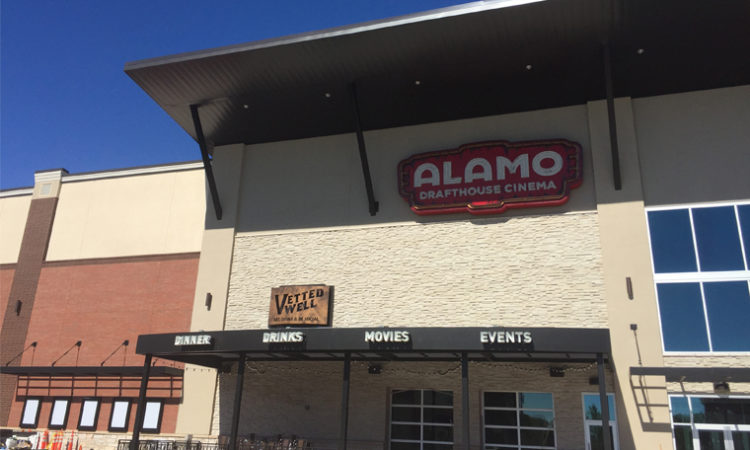 At New Alamo Drafthouse in Woodbury: Dont Be Tardy or Youll Miss the Party

Alamo Drafthouse Cinema, the Austin-based movie theater chain that bills itself as a place made “for movie lovers by movie lovers,” will soon premiere its unique mix of living room comfort and one-of-a-kind cinema events in the Twin Cities market. What will be Alamo Drafthouse’s first theater in the Midwest region, set within the Woodbury Lakes shopping center in Woodbury, will open July 22.

With a repertoire ranging from the latest blockbuster to indie flicks to classic films, Alamo Drafthouse boasts an experiential approach to movie-going, highlighted by in-theatre dining and “movie parties”—special screenings aimed at being interactive.

“Minnesota just seems like it’s a starving market for this type of theater,” says Tim Holly, creative manager of Alamo Drafthouse Cinema-Twin Cities, on why the company chose to break into the Twin Cities. “Also, we have such a vibrant arts community here and film community here, it seemed like a no-brainer to finally get one open here.”

Holly says Woodbury was a particularly compelling choice because it’s a “growing suburb” and centered between the Twin Cities and Wisconsin markets. He notes the region’s beer community also made it a great fit, as beer is a big part of the Alamo Drafthouse brand.

Largely unique to Alamo theaters—which first opened in 1997 by Tim and Karrie League—is the way food is served to theatergoers. Rather than wait at a counter, servers bring food orders to patrons as they are seated in the theater. 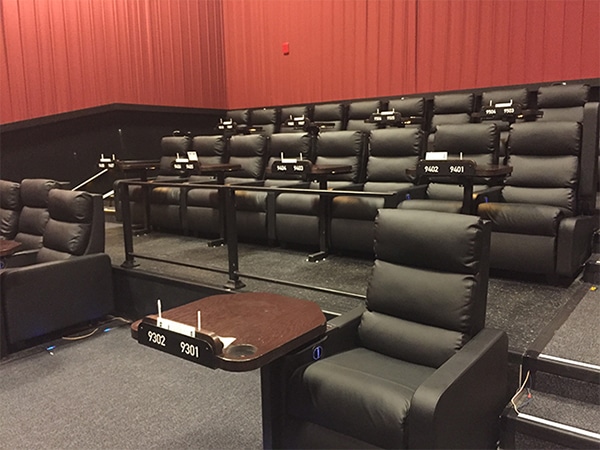 One of the smaller of nine total theaters at the new Alamo Drafthouse Cinema in Woodbury.

Seats are paired with personal tables equipped with order cards and a slot in which to place them. With an order written down, customers set their card upright and a server will then come by and scoop up the ticket, returning with the order shortly after, explains Holly.

Servers, known internally as “ninjas,” are trained to move quickly and quietly to limit interruptions and avoid blocking sightlines during the movie-watching experience. Guest are encouraged to arrive early and order food before the movie starts, says Holly. Food orders are also served without noisy paper or wrappers. 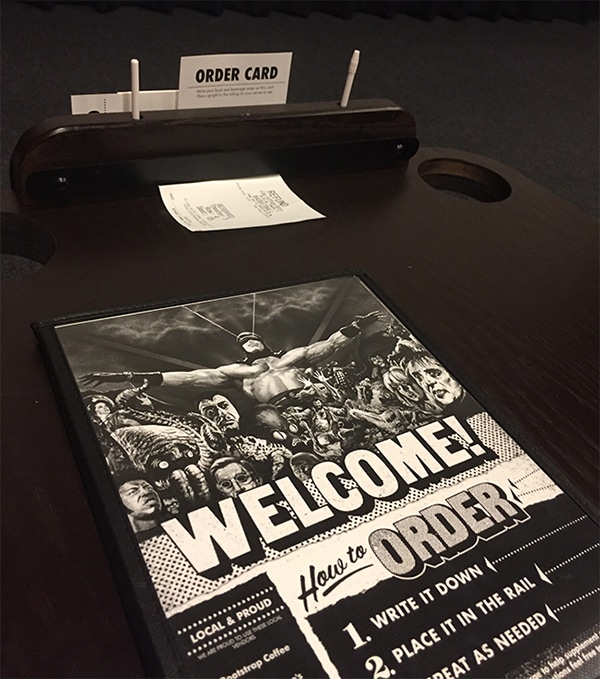 Every seat at the new Alamo Drafthouse Cinema in Woodbury includes a slot for an order card on which a guest can write what items they'd like from the vast menu.

In addition to its in-seat service system, Alamo Drafthouse is known nationally for its movie parties. Past screenings involve audience engagement in the form of sing-alongs, prop play—such as sword-fighting during a showing of The Princess Bride—and more. Some of its movie parties have made national headlines, most recently last summer when it held women-only screenings of Wonder Woman as well as screenings of It that required viewers to dress up as clowns.

“It’s a more vocal, communal experience,” says Holly. “It’s like going to a normal screening but then there’s a whole interactive level to it. It’s just part of our enjoying or celebrating the movie.”

Alamo Drafthouse also eschews the practice of showing previews. Instead, it produces tailored pre-shows for every film. For example, a screening of the latest Marvel movie would come with a pre-show recapping the franchise, a trivia game, a look at vintage Marvel cartoons, and more.

“It adds to making people want to show up a little early and enjoy the dining part of it, as well as the movie, instead of having a barrage of Coca-Cola ads or commercials,” says Holly.

To make the movie-going experience as optimal as possible for guests, though, Alamo enforces a strict set of rules. Late admittance is not allowed, though refunds are given to anyone who arrives too late for entry. Children under 18 years of age are not permitted in without their parents—which Holly notes also promotes the idea of the movies as an all-family outing—and absolutely no phone usage is permitted during the screening, on penalty of removal from the theater.

However, there is special programming for children, a membership offering for teens 15-17 to gain less restricted movie access, and designated more relaxed showings for younger kids or those with special sensory needs.

As yet, 150 people have been hired for the Woodbury Alamo, toward a planned 180 estimated positions. This includes a mix of part-time and full-time, says Holly, across roles including servers, bartenders, kitchen staff, and concierge. Hiring is still ongoing, but the Twin Cities Alamo Drafthouse is set to begin operations next week.

From July 22 through July 26, the Alamo Drafthouse in Woodbury will offer a limited number of $5 showings, compounded with 25 percent off concessions (excluding alcoholic beverages). The first full day of programming will come July 27. Showings already planned include Mission Impossible: Fallout, and movie parties for Pretty in Pink and The Big Lebowski. Holly says a Jaws event and Grease sing-along are being discussed.

Holly is optimistic about the theater’s future—noting some surprise it took Alamo as long as it did to come to the Twin Cities—but he’s grateful it’s here now.

“We’re hoping the community embraces Alamo and recognizes what we have to offer,” says Holly. “It’s this communal experience… bringing it back to the showmanship of going to the movies.”