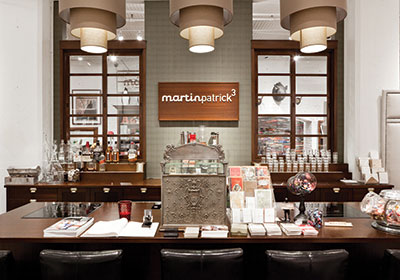 As North Loop Grows, MartinPatrick3 Holds Its Own

When MartinPatrick3 opened in 2008, it was one of the only upscale clothing and accessories boutiques in Minneapolis’ North Loop. Since then, a slew of other retailers have opened in the neighborhood, creating a critical mass of hard-to-find product.

“We’re aware of what Askov [Finlayson] is doing, or Arrow, or other stores around town,” says owner Greg Walsh. “If something crosses over, then we look at it. But for the most part, we’re internally focused on what we’re doing and what our customers are wanting.”

Walsh says the new neighbors have helped improve traffic at MP3 by making the North Loop a shopping destination. Exclusivity agreements with vendors—standard fare for boutique retailers—ensure the new guy down the block doesn’t ape anyone else’s coveted product lines.

“One of the things we really do is listen to what customers are saying about a brand or what they’d like to see in the store, what they feel is a missing category or product or price point,” says Walsh, who describes his store’s aesthetic as “real guy.” Walsh says his team has been fielding requests for higher-end fashion, and have responded by bringing in lines such as Alfred Dunhill, Ted Baker, and Missoni.

The concept for MartinPatrick3 grew out of Walsh’s home furnishings and accessories store ID Inside Design, itself spawned by his interior design firm, Walsh Design Group. After bringing in some lifestyle-oriented products—wallets, valets—and selling out within weeks, Walsh created a “test” storefront near ID’s North Loop location. Two and a half years later, he brought his three businesses under one roof when he moved them to the Colonial Warehouse building. This fall he is expanding again, adding 3,800 additional square feet, 3,000 of which are dedicated to MP3 retail space.

“There was never any business plan,” Walsh notes, “to have a men’s store like this.”