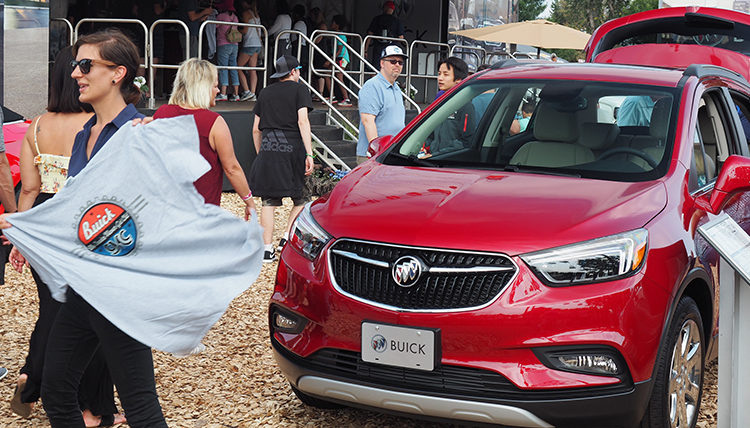 Instead of selling its cars and trucks, Buick and GMC booth was giving away free t-shirts to anyone who entered a raffle for a free truck. ( Photo by Sam Schaust)

While the short answer is no, the reason why is more complicated and dependent on a vehicle or appliance seller's interest in letting the Minnesota State Fair’s organizers take a cut of the sale.
By Sam Schaust
September 02, 2018

Between mouthfuls of deep-fried, doughy goodness, hundreds of fairgoers are taking advantage of the easy-going sales environment of the Minnesota State Fair to drop a lot of dough on hot tubs, saunas and other large ticket items. Yet trucks, cars, ATVs, and tractors don’t often find a new home over the fair’s 12-day stretch. Why is that?

Despite receiving more traffic at their booths in one day than many experience in a month or more, vehicle sellers say their reason for not selling is twofold: they can’t afford the percentage cut taken by the fair organizers and, simply, it’s easier to just be low pressure.

“We know that 99.8 percent of the people that come through here are just looking at the new bikes,” Tom Stifter tells TCB from the Davis Motorsports tent near Kidway. Stifter, also the general manager of Davis Motorsports in Delano, has his booth lined with the latest model Yamaha, Honda and Polaris vehicles each with a “Do not sit” sign atop the seats. 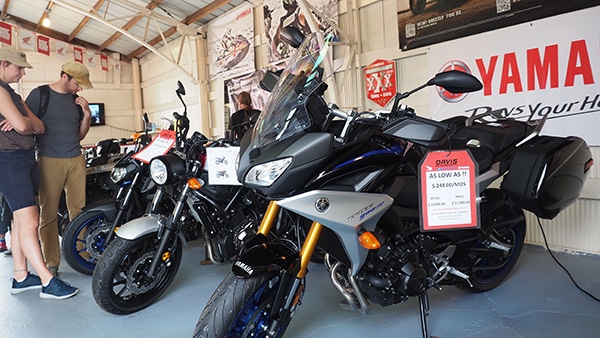 Fairgoers viewing the motorcycles on display at the Davis Motorsports booth. (Photo by Sam Schaust)

In order to break even for the cost of his vendor license and labor at the fair, Stifter says he needs to sell 20 of his vehicles. More often than not he’s successful as the majority of customers who he sees at the fair and later buy are hunters or fall weather enthusiasts after off-road vehicles. “If the fair were in May or June, we’d be a lot more motorcycle-centered,” Stifter says.

“Generally the people you’re selling stuff to here, they are probably the same customers you’re selling to in your store anyway,” Gruber says. “They just come out here to see if there are extra deals or coupons.”

Even if he were to sell from the booth, Gruber says it would be even more complicated given the reach Minnesota’s fair has. “So far today I’ve talked to people from North Carolina, South Carolina, Texas, Iowa, Wisconsin — they’re from all over the place,” says Gruber. “I mean, we could write up [sales] here, but consumers would still have to go back to the shop anyway.” 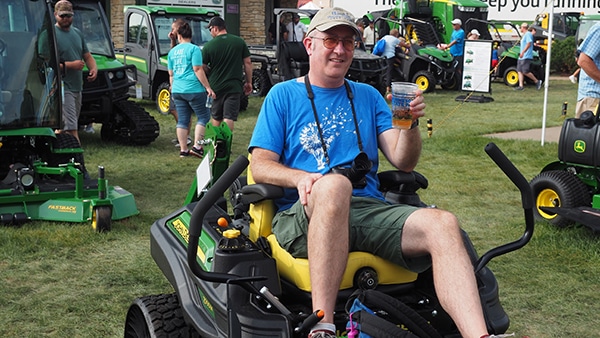 For some fairgoers, the seats of the John Deere lawnmowers and ATVs doubled as great spots to rest. (Photo by Sam Schaust)

Given most buyers need to use financing to cover a vehicle’s costs, Gruber believes it simply makes more sense to send fairgoers back to their stores. “A third of the people you’re talking to are loaded, too,” so it’s easier that way, he says.

Yet, that decision not to sell is made exclusively by the vendor, says Jim Sinclair, the Minnesota State Fair's deputy general manager.

Most big ticket vendors chose an exhibitor license for the fair, Sinclair notes, meaning those vendors don’t have an option to sell if they wanted to. “If you are an exhibitor, you can take an order here, but you cannot sell for cash, checks, credit card payments or take deposits of any kind on a transaction here,” says Sinclair, who oversees the dispersal of roughly 1,200 vendor licenses each year.

The cost to sell, however, is often an inhibitor to vendors offering items with a slim profit margin.

“An exhibitor license is at a rate of $90 per front foot,” says Sinclair. “So for example a 10 foot wide space at that rate would be $900 for the 12 days of the fair. A concessions agreement is issued to those who sell non-food products and can accept a form of payment, and those licenses are at $105 per front foot.”

For those concessions vendors, the fair’s organizers receive cash from each sale. Those compensation agreements, which Sinclair says are mutually determined by the fair and the vendor, range between 15 percent and 43 percent. Amusement rides and games, he says, often have a higher cut of their sales taken than the food stands and vendors selling goods and services. 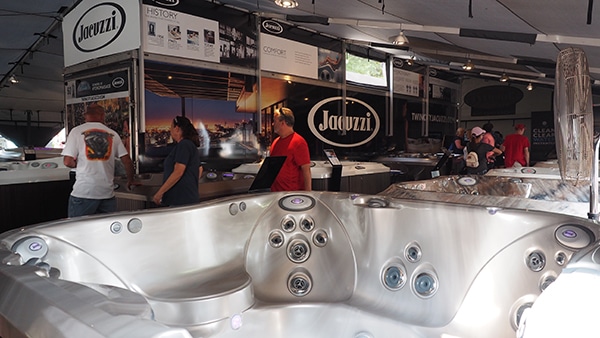 By the end of the Minnesota State Fair, all of Jacuzzi's floor models at its booth will likely be sold. (Photo by Sam Schaust)

Compared to traffic at other state fairs, “it’s not even close,” Power says. “Most fairs have six to eight hot tub companies, but this fair only allows three, so it’s a perfect storm for the hot tub industry.”

Power is among a select group of Jacuzzi salespeople at the company’s booth hawking $10,000-plus hot tubs. “These [salespeople] are considered the best in the industry,” he said while namedropping colleagues from Florida, California and Missouri. Ten salespeople total populate the booth each day, eight of which are out-of-state workers selected specifically by their corporate branch to push as much product as possible.

“[We’ll sell] 300 Jacuzzis in the 12 days of the fair,” Power tells TCB. Surrounded by bubbling hot tubs, he adds that “each of these [floor model hot tubs] will get delivered, so as soon as the fair is over these all go to someone’s house.” Amplified by the hot and humidity of the fair, Power says just as many Jacuzzi hot tubs will sell at the Minnesota State Fair as in Texas, which boasts the only other state fair with a larger total attendance.

“I used to do all of the fairs in the country until I opened my own store [in Austin, Texas],” Power adds. “Now, this is the only one I do.”