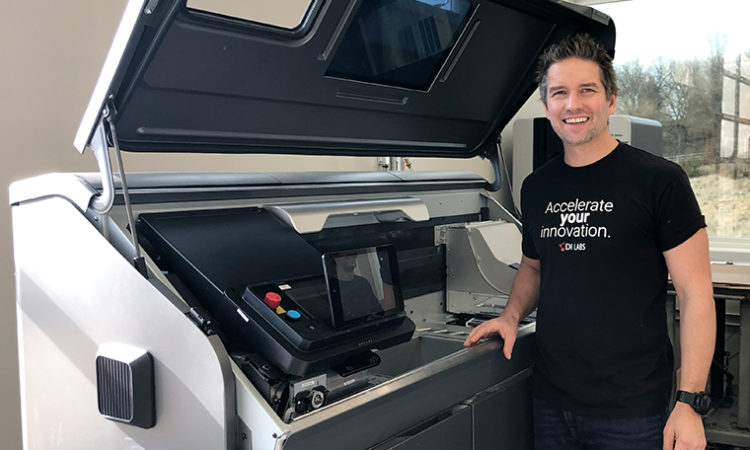 DI Labs co-founder Carl Douglass stands with one of his 3D printers.

Spicer-based DI Labs, which already prints parts for 3M and Toro, has rolled out new equipment to help capture business in the medical device industry.
By Dan Niepow
January 14, 2020

A small 3D print shop in central Minnesota is building parts for some of the state’s biggest companies.

At DI Labs’ office about two hours west of Minneapolis, machines operate 24 hours a day printing prototypes of parts and thousands of other components for 3M, Toro, and a handful of other companies throughout the Upper Midwest and across the country. The company has built everything from full-sized aircraft fuselage to jigs and fixtures for manufacturing.

Last month, DI Labs rounded out its 3D printing toolkit with a new surfacing system to help capture business in Minnesota’s medical device industry. Known as PowerFuse, the system uses a special chemical to smooth and seal 3D printed parts so they can be sterilized and used in medical settings, such as operating rooms.

“We purchased PowerFuse knowing that medical device community had the greatest need for it,” says DI Labs co-founder Carl Douglass. DI Labs purchased the system from Germany-based Dye Mansion for about a quarter of a million dollars. DI Labs is the first company to buy the machine.

The company, which employs seven at its office in Spicer, has notched a number of firsts since it was founded in 2012. In 2017, the company became the first in Minnesota to own a Multi Jet Fusion machine, an HP printer used primarily to build prototypes. Now, prototyping accounts for about half of DI Labs’ business, Douglass estimates.

Douglass, who relocated from Ohio to Willmar for an engineering job 10 years ago, founded DI Labs with his brother Brian. The two went on to patent designs for 3D print heads. Today, most of DI Labs’ business comes from referrals.

Still, for Douglass, it’s not simply a matter of volume. He notes that his company competes with the big dogs in 3D printing like Protolabs and Stratasys. But where bigger printers focus on producing as many parts as possible, DI Labs favors a more individualized approach.

“We’re a very small company, and we’ve developed a tight network of relationships,” Douglass says. “We walk alongside customers in their process to understand their needs. Then, we provide a white-glove, tailored solution.”

More and more manufacturers are turning to 3D printing as a lower-cost alternative. Traditional methods for building new parts, such as using injection molds, can cost “hundreds and thousands, if not millions” of dollars, Douglass says. And the process typically takes anywhere from six to eight months.

With 3D printing, companies can have a new part in a matter of days. There’s also more flexibility to make changes to future parts if needed, Douglass says.

Meanwhile, DI Labs plans to bring another system online next month to expand its reach into the med-tech market. Known as the Carbon M2 machine, the system can print materials made of silicon and other “biocompatible” materials. That may help attract medical device customers, along with clients in the automotive and aerospace industries, Douglass says.

“At our heart, we’re still a product development firm,” he says.