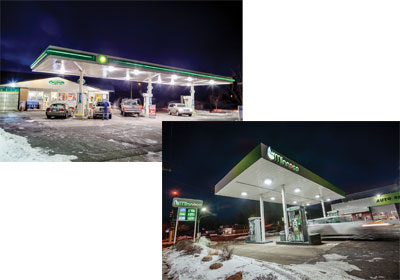 A Tale Of Two Gas Stations

With oil prices constantly in flux, it’s a balancing act for gas stations to stay in the black. When the price of oil drops, stations start price-matching in an effort to ditch the gas they paid more for, while replacing it with fuel purchased at the new lower price.

In the aftermath of the Gulf of Mexico oil spill in 2010, Bohnen experienced a drop in sales at his BP station, while at the Mobil station he owned across the street sales surged. “I’m tied to what happens nationally and what the oil company does, too.”

Station owner Richard Bohnen says his average profit per gallon is 10 to 15 cents, compared with an average 30 percent markup on his convenience store goods. “Can you just sell gasoline and make it? No,” he says. “You have to have alternate profit centers,” such as car washes, auto repair and microwave burritos.

Bohnen is in the unique position of owning two gas stations directly across the street from each other at 60th and Penn in south Minneapolis. The original is a Minnoco, which his family operated under the Mobil brand from 1976 until 2013; the second is Crosstown BP, a station he purchased in 2007. The BP was appealing because it has a car wash and larger convenience-store.

Bohnen’s biggest expenditures are credit card processing fees, which often surpass labor costs. Back when gas was $4 a gallon, he spent $200,000 in credit card fees for the year.

About half the nation’s gas stations operate under Big Oil brand names, but that number has been dropping as oil companies have sold off stations to focus on drilling and production. Nearly all stations still operating under a Big Oil name like BP, Shell or ExxonMobil are operated by independent franchisees.

For franchisees, all money collected at the pump is sent directly to the oil company to be credited against future gas purchases. “Let’s say you have a big car wash month,” says Bohnen. “They hang onto an excess of money and apply it to a gas load that you may or may not have ordered yet. In the meantime, you’re trying to order and pay for your groceries that are in the store, and BP will be sitting on your cash flow.” (Crosstown BP is under contract to the oil company through 2021.)

This model prompted a group of Minnesota station owners to buck Big Oil and start their own brand, Minnoco, in 2012. Bohnen was Minnoco’s founding president.

The benefits include lower credit card processing fees, direct access to monies collected from fuel transactions, lower prices on wholesale gas and a bigger say in company-branded marketing efforts. “We’re able to buy [wholesale] gas just the same as SuperAmerica and Holiday,” says Bohnen. “When you’re branded as a Mobil they feel that there is a value to having their name up there, so therefore you pay more for their gas.” —Megan Wiley