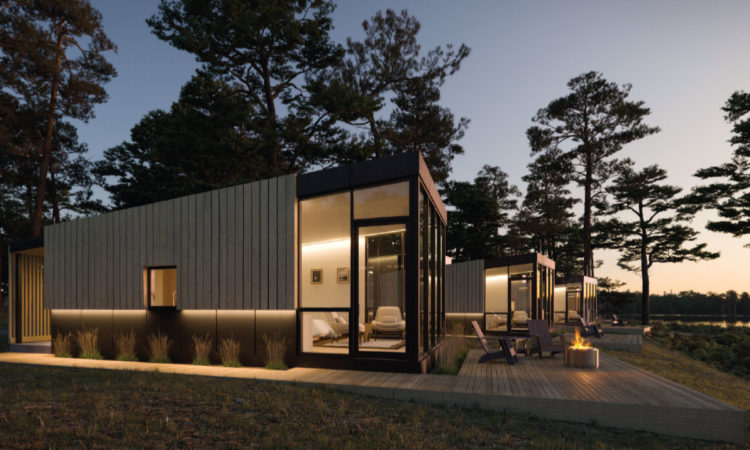 New tourism infrastructure is a rare thing in greater Minnesota. Factor in a short tourism season, modest “up north” pricing, and the skyrocketing cost of lakefront land, and you have the recipe for a rather limited pipeline of new hotels and resorts. And what does get built tends to be traditional in design and character—logs, pine, knickknacks. We’ve all stayed there.

But for 2022 there’s something new under the sun, the creation of one of the more prominent names in Minnesota nature entrepreneurism. Benjamin VandenWymelenberg, founder of Woodchuck, a St. Paul-based product manufacturer, has set his sights on tourism and is developing a small resort/wedding venue that will likely raise the bar on “up north” lodging and design.

Called Nature Link Resort, the property that just opened on Clark Lake in Nisswa in the Brainerd Lakes region. Initially it’s just five cabins and four lodge rooms (the wedding component opens in mid-September), but eventually the 13-acre property will hold 20 cabins and 20 hotel rooms, and it will be the first of five such developments the founders plan to open across the U.S.

VandenWymelenberg’s partners are his wife Zoie VandenWymelenberg and Kate and Tony Becker, creators of Pinewood Weddings & Events in Cambridge, a modern-design wedding venue they founded to overcome many of the typical pain points of weddings. The VandenWymelenbergs were married there in 2021, and later, after an exploratory dinner, they decamped to look at properties to buy.

At first, the partners searched for 15 to 20 acres on the North Shore of Lake Superior, but they found water access limited and the area chronically short
of workers.

At first the partners searched for 15 to 20 acres on the North Shore of Lake Superior, but they found water access limited and the area chronically short of workers. The site in Nisswa was a resort built in 1910, converted to a hockey camp in the 1980s. Some existing structures will be remodeled, the partners say. Nature Link won’t offer a restaurant, and Wi-Fi will be available, but no TVs. The partners’ goal is to remove modern distractions so guests can enjoy their surroundings. They expect to employ 30 to 50 people year-round once Nature Link is built out.

The wedding venue is the catalyst for the business, says VandenWymelenberg, generating room nights that don’t need to be individually sold and rental fees for the public spaces. (One- and two-bedroom cabins go for $300-$500 per night.)

And they are already in the hospitality business to a limited extent, operating several rental properties in northern Minnesota. Lest you confuse it with a business venture, though, Tony Becker is quick to note, “This is not a business; we’re changing people’s lives.”

Downtown Minneapolis Is Still Growing. Where Precisely Are People Moving?
Deconstructing the Office Romance
Modest Hopes for Big Screens
Will Women Win in Hybrid Workplaces?
See all stories by this author >