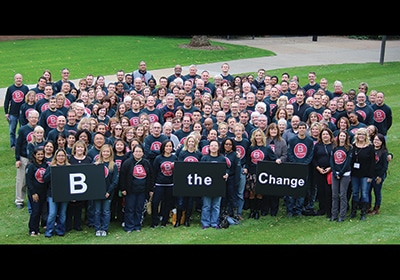 A New Kind Of For-Profit Comes To MN

A new Minnesota law allows companies to incorporate with a mission to help society.
February 01, 2015

In a capitalist society, should private companies strive to achieve something more than a healthy profit? Yes, according to a cadre of Minnesota small businesses that are stepping forward to become “public benefit corporations.”

On Jan. 1, Minnesota became the 27th state to approve this incorporation structure, which attorney Bert Black describes as a means for companies to “do some good while doing well” financially. It provides a greater level of protection for ownership/management from shareholder challenge.

Black, who’s worked in the Minnesota Secretary of State’s office for more than 33 years, says public benefit corporations will be taxed just like any other private business. The difference: “You are not required to spend all the profits on improving the business or as dividends to shareholders,” Black says. Some of that net income can be earmarked for charitable or other civic purposes.

Greg Ackerson, co-owner of Apex Cos. in Coon Rapids, is among the business owners pursuing the designation. In 2012, he and co-owner Mark Rasmussen formed the company, which provides energy-efficiency and sustainability solutions for business.

Motivated by their Christian faith, Ackerson says, “We’re trying to make a difference.” After a life-changing mission trip to Haiti, Ackerson says that he wanted his business to support causes that would make the world a better place. In addition to supporting the poor in Haiti, Apex is setting aside profits to help Americans address housing and other basic needs.

At the Gray Plant Mooty law firm, attorney Sarah Duniway says that several businesses felt constrained under traditional corporate structure. She says under the new public benefit law “the fiduciary duties of the board of directors run to both maximizing value for shareholders and advancing the mission.” Each company will have to file an annual report, Duniway says, so there is a “window for the community to see if they are living up to their promises.”

Sunrise Banks, a collection of banks in St. Paul and Minneapolis owned by the Reiling family, has been acting like a public benefit business for several years, says its social responsibility manager Callie Koeniger. Sunrise focuses on originating a high percentage of loans in low- and moderate-income communities.

Sunrise will seek the designation, operating for the benefit of “society, the environment and the well-being of present and future generations.”

Black estimates that about 30 companies will seek the designation in 2015.