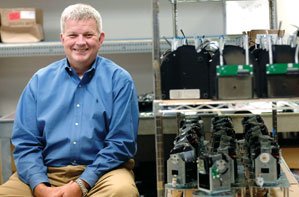 A Minnesota Company Makes a Video Camera in the U.S.A.

A video camera made in the USA? A New Hope company makes the only one.

The company, Vaddio, sells and distributes PTZ (pan, tilt, zoom) digital cameras used in broadcasting, videoconferencing, and other audio-visual applications. Vaddio also manufactures and distributes mounting hardware, cabling, and camera-control units that help make PTZ cameras produced by companies including Sony and Canon easier to install and use. These video cameras can be operated remotely, either singly or in a group. Customers include businesses, churches, schools, and courtrooms.

The company that produced the ClearView HD-18 was cofounded in 2003 by Rob Sheeley. After working in marketing and product management at RCA and Honeywell, he formed Minneapolis-based Acoustic Communication Systems, in 1987, to sell videoconferencing systems. He later founded Acoustic Components, which sold furniture for videoconferencing equipment.

Sheeley cofounded Vaddio with former Videolabs international sales manager Tom Mingo to sell PTZ control systems that had been developed at Videolabs but which ClearOne had no interest in. Six months later, they launched their first product, the Control View, which allowed classrooms to automate for videoconferencing.

This soon led to lucrative partnerships with Sony and Canon. When these camera makers decided to take a pass on Vaddio’s idea for developing a high-definition CCD camera, Vaddio developed its own and manufactured it at the New Hope headquarters. Vaddio now has two other PTZ camera designs in the works while continuing to distribute Sony and Canon products.

Since its inception, Vaddio has grown from three employees to 35, with 2009 revenue expected to hit $24 million. The plan is to make that $50 million over the next three years. Vaddio currently has 1,350 distributors in North America and an international distributor in the Netherlands.