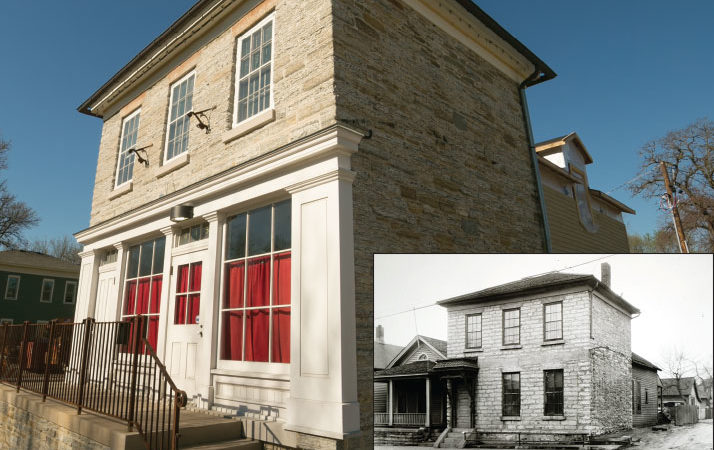 A Lawyer’s Plans for the Metro’s Oldest Tavern

Money is no object in a journey to restore the historic saloon.
June 01, 2017

In 2008, as the mortgage crisis was in full swing, Tom Schroeder paid $60,000 for a house just around the corner from his own on Smith Street in St. Paul. The Faegre Baker Daniels lawyer had a hunch that the limestone building, which had been used as a private residence since 1947, was more than it seemed. “I love history and have a graduate degree in history and have always enjoyed studying and understanding the history of neighborhoods I’ve lived in,” Schroeder says, “and nobody had ever done the research on this place.”

That initial curiosity was channeled into hundreds of hours of research at the Minnesota Historical Society. Among his discoveries: the residence originally operated as a saloon and was built in the fall of 1857, making it the oldest commercial structure in the Twin Cities. As homage to its past, Schroeder has spent the past eight years restoring the time capsule to its former glory—complete with steamboat chairs, period glassware and hand-pressed beer tokens—with the intention of re-opening it this fall, once again as a public house. He’s even naming it Waldmann, a nod to the building’s original owner and barkeep, Anthony Waldmann.

The cost to reclaim the past, however, has gone well beyond what Schroeder paid for the property. “I couldn’t even begin to tally how much [the restoration] has cost,” he says. “The business plan may not look totally rational, but that’s what they call a sunk cost.” Still, labors of love aren’t uncommon in the restaurant industry, says local restaurateur Tim Niver of his own St. Paul-based passion projects: Mucci’s Italian and especially the small, out-of-the-way Strip Club, hardly a project built to drive turnover.

Nevertheless, unattainable ROI has done little to dampen Schroeder’s ardor to revive a rediscovered landmark. “If I were to be opening a normal taproom, this building would not be any different than any of the other of 28 or 36 taprooms in town. It wouldn’t be worth doing,” he says. “But I think the success of this place will be the fact that its history is its greatest asset on the balance sheet.”—Sam Schaust