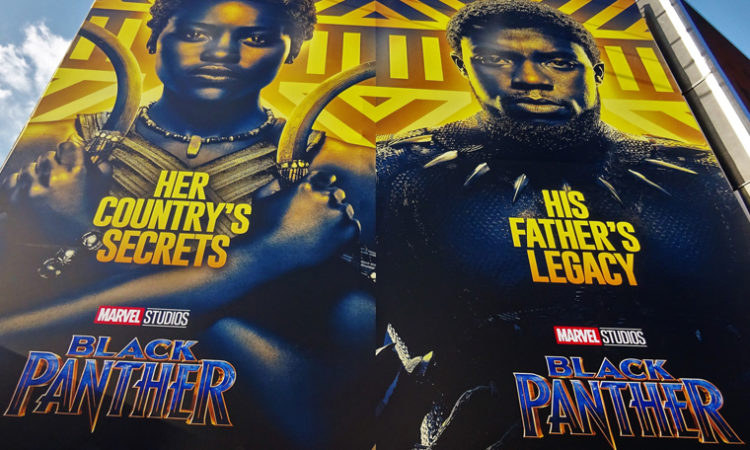 A look at what local leaders think of the groundbreaking film, and the area’s own contributions to industry evolution.
By Amanda Ostuni
March 08, 2018

With Marvel Studio’s latest superhero film, Black Panther, led by a black director and cast, Hollywood took a giant leap toward true, widespread diversity. It’s a goal some Twin Cities organizations have long been working toward.

The Twin Cities Black Film Festival, designed to showcase the talents of black actors and filmmakers, has since 2002 been encouraging local black communities to be interested in film. Meanwhile, FilmNorth has been providing filmmaking education and resources to locals, especially youth, with otherwise limited access. Then there’s the Film Society of Minneapolis St. Paul, which each year produces the state’s most attended festival, the International Film Festival (MSPIFF), which annually includes diversity in its formula.

“We look for films that enlighten, educate and entertain an audience, and we know we want to have diversity — [we have to appeal to] an entire palate of people,” said Craig Laurence Rice, filmmaker and MSPIFF programmer. “In the Twin Cities, there are 87 languages spoken, and we need to be looking for as many communities and cultures as we can to expose to films.”

Rice said through community outreach, the Society tries to nurture an interest in film within diverse populations. With this in mind, it puts on monthly urban-based movie screenings. Recently shown films from and about black individuals in particular include the documentary I Am Not Your Negro, a new Baltimore-based documentary called Step, and the locally made A Stray, about a Somalian refugee living in Minneapolis who befriends a stray dog as he’s rebuilding his life following personal struggles.

Rice said such showings are crucial because having people see films is what inspires them to make films. As the programmer for Minnesota Made, the homegrown category within the International Film Festival, Rice has seen a few, but not a lot of entries by African Americans over the years.

He noted high equipment costs and lack of access to necessary training as typical barriers. That’s where FilmNorth comes in.

“A lot of organizations are doing this work of intentionally reaching out to populations that haven’t had access to the necessary resources,” said Deacon Warner, FilmNorth youth programs director. “[We at FilmNorth] have gotten better at being able to reach a more diverse population and keep a diverse program.”

The education organization, which is wedged between PuzzleWorks Escape Co. and Lake Monster Brewing Co. in St. Paul, launched a youth program ten years ago through grants and other funds. The program offers an after-school class for high school students each semester in which students can learn various aspects of filmmaking or create projects for paying clients and have their films screened at events.

The program usually attracts 20 to 30 students per semester. About half are students of color, Warner said, including individuals from Minnesota’s prominent Somalian community.

FilmNorth’s program also offers free bus cards to students who need transportation assistance, and looks for ways around any other logistical challenges, whether it be holding up a part-time job or family care needs. FilmNorth also runs in-school residencies and summer camps open to youth of different ages.

“Our overall mission is to support a strong, diverse, independent film industry in this part of the country,” said Warner. “More and more films coming from a diverse population has been inspiring for young people, because it’s important that you see yourself in the role you want to become.”

Warner added that the success of such films, like Black Panther, is a testament to the need for FilmNorth to continue their mission.

“We encourage kids to explore issues that are important to them,” said Warner. “Films that are allowing people to tell their own stories is important… and that’s something that kind of connects with Black Panther.”

A source of inspiration

“It’s absolutely amazing. The writing is solid, and the cast is perfect on every level,” said Morrow, who’s also CEO of The Morrow Group, a Minneapolis-based marketing boutique. “I’m very proud to even talk about it. History is being made, it’s broken so many barriers.”

As the first Marvel film with a predominantly African-American cast, Black Panther has made more than $500 million in the U.S. and almost $900 million worldwide, as of March 7, box office statistics show. Its opening weekend haul also ranked as the highest-ever grossing for any African-American director. Among other milestones and broken records, it’s also the second-biggest Marvel film for North America and has far exceeded expectations abroad.

Morrow is ecstatic about the wake-up call Black Panther’s success serves as.

“Hollywood can no longer tell people [a film with an all-black cast] won’t do well overseas, because it did,” said Morrow. “I think Hollywood has been stuck in its ways and this shows they were totally wrong. There’s no way you can deny it this time.”

Morrow lauded director Ryan Coogler and was particularly appreciative of his portrayal of African culture: from showing the wealth and royalty that exists on the continent to its merging of cultural nuances, including the film’s integration of a popular African American handshake into a Wakandan greeting. Moreover, Black Panther borrows from history, incorporating wardrobes inspired by real-life women warrior tribes and inserts references to slaves jumping overboard from ships to escape a life of bondage.

“Stuff like that, as a black person – everyone should know our history… so that to me was super important,” said Morrow.

Additionally, Dr. Yohuru Williams, dean of the College of Arts and Sciences at the University of St. Thomas in St. Paul, noted that T’Challa’s sister Shuri, an intelligent and tech savvy heroine, has already begun to inspire girls to think more about STEM education.

“This is escapism at its best for a community that doesn’t get films [putting them in the spotlight]. It’s what the community was so hungry for,” said Williams. “And Black Panther may have paved the way for studios to be interested in… empowering a black director with black or mixed casts to tell poignant stories.”

He added that it’s a trigger for people to consider cinema as a way to share their stories, and to get people to want to attend movies and events like the Twin Cities Black Film Festival.

Morrow hopes that’s the case, as usually about 65 percent of her festival audience is white. Though that’s somewhat reflective of Minnesota’s overall demographics, she’d like to see the audience move closer to an even mix of white and nonwhite attendees. She thinks the key for that change is exposure.

‘You have to stand up’

To draw attention to the Twin Cities Black Film Festival, Morrow’s company put on a screening and, while at the TCBFF annual book fair at Barnes & Noble on February 24, they gave away Black Panther merchandise while promoting their annual film event. Some attendees, there for the movie mania, learned about the festival for the first time, Morrow said.

As for generating filmmaker interest, the festival has benefited from Morrow’s firm The Morrow Group landing contracts for Minneapolis Super Bowl parties for BET, Rolling Stones, Playboy and more.

As a result of those gigs, the TCBFF website was bombarded with interest from filmmakers, Morrow said. Some of those filmmakers, she added, either previously hadn’t heard of the 16-year-old festival or had doubted its credibility, despite the festival’s track record of noteworthy guests, which have included Will Smith, Kevin Hart, Nate Parker and Pam Grier.

Morrow hopes that one of the yet unknown filmmakers who enters her festival this year — or in the future — will be the next Ryan Coogler.

“I think [Black Panther and Coogler] have inspired people to just go for it, don’t think that it can’t happen,” said Morrow. “We have so much talent that has not even been tapped into because of laws and things in Hollywood… but you have to be aggressive, you have to stand up.”

Morrow has plans to open a movie theatre soon, she said, on top of her ongoing work to kick off a black fashion week in May as a way to showcase black talent in the fashion and jewelry arenas. Meanwhile, FilmNorth has no plans to discontinue educating the next generation of filmmakers, while the Film Society of Minneapolis St. Paul will again highlight diversity through its screening selections during its festival next month.

“People come to films they can relate to, cultures they want to see,” said the Society’s Rice. “The audience in the Twin Cities is very diverse because our culture here is open for that. We believe in America’s diversity, we help promote and protect cultures and races. That’s what we do.”