Most of us assume the pandemic exposed a frightening lack of hospital bed and ICU capacity in Minnesota. The hospital systems don't exactly see it that way.
By Dan Niepow
March 07, 2021

In early October, Fairview Health Services made a surprising announcement: Though the Covid-19 pandemic was nowhere close to over, the health system laid out plans to shutter Bethesda Hospital in St. Paul,  which had been the only facility in Minnesota specifically dedicated to Covid-19 care. Ramsey County would go on to lease the space as a homeless shelter.

At the time, Fairview officials pinned the decision, in part, on a crippling loss of revenue: For the first six months of 2020, the health system, which serves many parts of the state, lost an unanticipated $163 million.

“To improve health outcomes and experience for our patients, we must be willing to do things differently,” Fairview president and CEO James Hereford said in a statement.

Yet a month later, Gov. Tim Walz closed gyms and other large-capacity businesses, plus seating at restaurants, and stopped youth sports to reduce the spread of Covid-19 and not overwhelm hospital capacity. This action put thousands of Minnesotans out of work and put sectors of the economy already reeling from the pandemic back in survival mode.

In a mid-December press conference, where the governor extended his pause on indoor dining, Walz warned that hospitals were on the verge of “catastrophic” capacity issues. Daily media updates told of Covid patients shuttled around the state in search of capacity, and the number of available beds in the metro area hovered in the single digits.

The two actions, in sequence, likely posed a head-scratcher for many Minnesotans: If hospital capacity was the issue, why did Fairview close the state’s only hospital exclusively dedicated to Covid-19? And what exactly do state officials mean when they talk about “capacity,” anyway?

The ostensibly contradictory nature of hospital capacity stems from the fact that capacity isn’t determined by beds alone; it’s a complex puzzle that involves space, staff, and equipment. When one piece of the puzzle is missing, the entire system goes askew. What complicates the puzzle further is a decades-old law on the books that prevents health systems from expanding or building new hospitals without legislative approval. Though at least one hospital exec we spoke to wished for more flexibility, hospital systems are, generally, on board with the regulatory control and say the state’s health care infrastructure has functioned as designed in the face of a worldwide health crisis.

A bid to prevent overbuilding

Under a 1984 law, health systems looking to add beds or build a new hospital must first submit a request to the Minnesota Department of Health (MDH). The request is passed along to the legislature, with the department’s assessment. State legislators either craft an exception to the moratorium or reject it. In the end, lawmakers have the final say.

“The system has been stress-tested by two surges of the Covid pandemic,” says Dr. Rahul Koranne, president and CEO of the Minnesota Hospital Association (MHA). “This is not hypothetical. … We have clearly shown in the spring of this year and in the last several weeks of fall and winter that the health care infrastructure has withstood the stress-testing of a global pandemic.”

Hospitalizations in Minnesota due to Covid-19 reached a peak of 1,840 on Nov. 30. For perspective, in 2019, the state had a total of 11,364 “patient-ready” beds—i.e., beds that wouldn’t require hospitals to make any physical changes before accepting patients (per MDH data). That’s less than 20 percent of overall capacity, but it’s important to keep in mind that hospitals have non-Covid patients to take care of, too. Generally, those patients far exceed the number of Covid hospitalizations. What’s more, according to MDH data, the state actually had more than 16,000 licensed “banked” beds, which could be converted for patient use if needed.

Koranne maintains that “the physical space to provide care to Covid-19 patients has never been an issue since the very beginning of the pandemic. There has always been excess bed capacity available.” 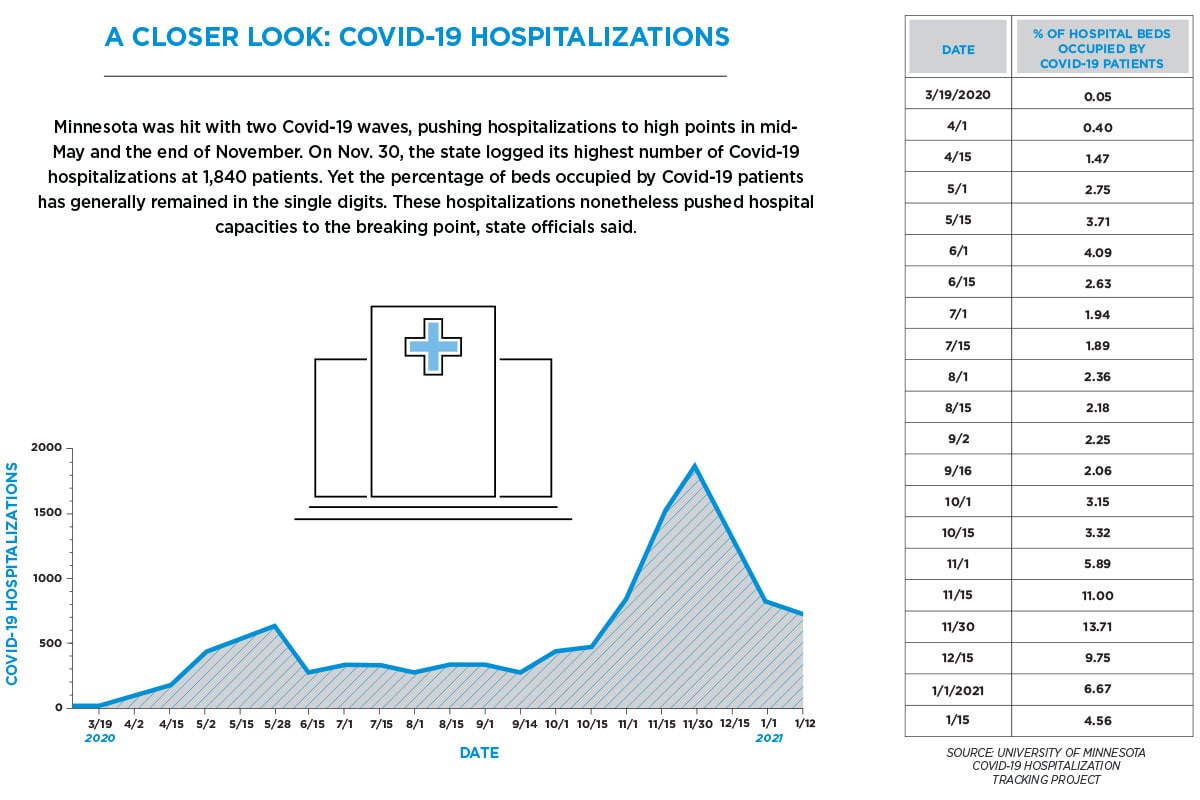 It’s a good thing for hospitals to run high occupancy. If they ran at a low occupancy and had a lot of open beds and staff just waiting around, that is going to add costs to the system.

That’s why MHA stresses the importance of “care capacity”—the combination of beds, staff, and equipment to take care of patients. Koranne acknowledges the tough economic consequences of state-mandated lockdowns, but he argues they were necessary to keep care capacity in balance and to keep the state’s overall Covid-19 case count low.

“Minnesotans have sacrificed for many months to help ensure that we have enough care capacity to meet the needs of both Covid and non-Covid patients,” he says. “Without those sacrifices, it is likely that more people would have contracted Covid, needing hospital and ICU care and stress-testing our system even more.” 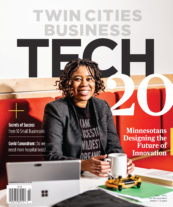 Why Being Old Is New Again
The Fine Print: The Hardest Job Is Finding One
Business as Usual?
Move Over, Eggo: Nordic Waffles Is Conquering the Freezer Aisle

Hospitals, unlike hotels, don’t really like 100 percent occupancy. There’s no industry standard, but many urban hospitals around the country run at a rate of around 65 percent, though it’s a complex issue and varies depending on an individual institution’s capacity. Regions Hospital in St. Paul, for instance, runs on an average occupancy rate of about 88 percent, says CEO Megan Remark.

On the other side of the coin, low occupancy isn’t ideal, either. “It’s a good thing for hospitals to run at high occupancy,” notes MHA’s Koranne. “If they ran at a low occupancy and had a lot of open beds and staff just waiting around, that is going to add costs to the overall health care system.”

Regions is also an exception in another way: The hospital, operated by HealthPartners, obtained one of the few waivers to Minnesota’s moratorium. In 2018, the legislature approved an exception that allowed it to add 55 new beds, though the system initially asked for 100.

“We are closely coming up against the number of bed licenses that we were granted,” Remark says. “By the end of 2021, we will have opened all 55 of the beds. … From a moratorium perspective, we hope, going forward, to have the tools and the flexibility to help us better plan and meet the needs of the community in the future.”

Including the Regions expansion, the state has granted just 28 exceptions to the moratorium since it was enacted in 1984 to control health care costs. Before the restriction was in place, the state had a “certificate of need” law, which functioned similar to the moratorium but only required approval from a state health agency, not the legislature. But legislators determined that the law “did not appear to control growth in medical facilities and health care investments,” according to a 2016 MDH document. A moratorium, then, “was seen as a more effective way of limiting investments in excess hospital capacity.”

Minnesota’s restrictions aren’t totally unusual; 35 states and D.C. have some form of a certificate of need law for new hospital beds.

HealthPartners first asked the state for a waiver in 2017, and other hospital systems quickly objected. Both Fairview and Allina Health questioned the need. Fairview, in particular, said the added beds could threaten the viability of its nearby but aging St. Joseph’s Hospital.

Minnesota’s health care systems are nonprofit businesses, but they are not charities. They depend on insurance companies and Medicare to fund most operations, so if their cost structures are not competitive, they often cannot raise prices. An open playing field might result in a spate of newer and more modern hospitals, compared to many of the aging facilities that dot parts of the local landscape, but experts say such an environment risks creating a facilities “arms race” that drives up overhead without commanding additional revenue.

The resistance to Regions’ expansion points to another reason some health care execs favor the moratorium: It limits competition.

“If it was easy to build a new hospital, there’s the possibility that all sorts of outside companies would come in and compete,” says Allan Baumgarten, an independent health care analyst based in Minneapolis. “Hospitals are seeing that more and more of their care is shifting away from the inpatient side to the outpatient side. Yet the inpatient side still represents a large share of their revenues, and in a competitive market they face losing those revenues to other health systems.”

Thomas Stratmann, a health economics professor at George Mason University in Virginia, agrees. “Hospitals tend to like [the certificate of need law] because it means fewer competitors,” he says. “In my view, the way to bring costs down is to foster competition.”

But the hospital association doesn’t see it that way. MHA execs hold that the moratorium actually brings down health care costs for systems, patients, and insurers. That’s why the association has long supported the moratorium and continues to do so to this day.

“From our standpoint, there’s a very clear reason why this moratorium is needed,” Koranne says. “It works and it actually is helping Minnesotans.”

Of course, other factors are in play in determining health care costs. Stefan Gildemeister, Minnesota’s state health economist, put it this way: “The moratorium, if it had a role in preventing excess capacity and therefore higher prices, likely played a subordinate role compared with other factors such as market power, the role of purchasers and payers, and the role of government.”

If moratoria aren’t the silver bullet for reducing costs, what else can be done? Some argue that more transparency with hospital costs could make a difference. Peter Bartling, a health care consultant and former CEO of Minnesota Oncology, argues that publishing prices might help bring down care costs. As of Jan. 1, hospitals are now required, under a Trump administration rule, to disclose prices for various services, though it remains to be seen how that will change health care in the future.

All that said, there’s another lingering question: How are local hospital systems planning for the next pandemic, given the state’s contention that they were nearly overwhelmed by this one? Might they attempt to add general and/or ICU beds?

Well, likely not, for several reasons. For one, the state still has a plethora of licensed beds. In 2019, about a third in the Twin Cities metro went unfilled, Koranne notes. Plus, Covid-19 has accelerated a trend toward more outpatient, non-hospital care for routine diagnostic and treatment procedures such as colonoscopies and low-risk biopsies. Even before the pandemic, some insurers were pushing patients toward care in outpatient settings because it costs less.

“If a service can be delivered at an equal quality and at dramatically lowered cost,” says Bartling, “these services should be in the network, not in hospitals.”

Telemedicine, too, has emerged as a key way to provide some routine medical services without requiring hospital or office visits.

“Until the pandemic hit, I don’t think there was anybody who was clamoring to build new hospitals or saying there’s a need not being met out there,” Baumgarten says. “The pandemic has obviously been terrible, but it’s a short-term blip, a short-term surge in the need for capacity.”

And indeed, it’s hard to make the case for more hospital space with the increased use of virtual visits and outpatient clinics for more and more services.

“If you look at the health care system of the future, there’s going to be much more care provided as an outpatient and in the patient’s home,” Koranne says. “We’re not going to need as many hospital beds because more care is going to be provided through this modality. … We will never go back to delivering care like we used to.”

This story appears in the Feb./March 2021 issue with the title “Recovery Room?”