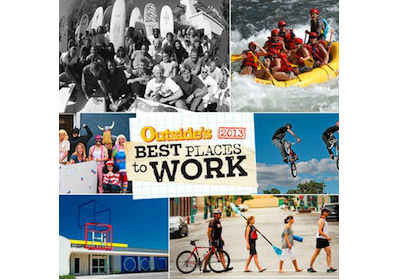 Outside magazine recently named five Minnesota companies to its 2013 “America’s Best Places to Work” list, which includes 100 businesses across the country.

The magazine selects companies for its annual list based on their work-life balance standards; social and environmental contributions and initiatives; employee benefits, compensation, and job satisfaction; and community outreach programs.

St. Paul-based protective workwear producer Tenacious Holdings, Inc., along with its Ergodyne division, ranked fourth on the list. According to Outside, staff members regularly get together for competitions such as wild game cook-offs and “wellness bingo.” An employee-run “giving team” organizes the annual “65 Roses Golf Tournament,” which has raised more than $2.5 million for cystic fibrosis research.

Coming in 37th on the list is Minneapolis-based advertising firm Colle+McVoy, which ranked 34th on last year’s list. Outside cited the firm’s happy hours—which include employees pedaling the office “beer bike” around—yoga and fitness classes, shiatsu massages, and even weddings hosted at its offices. The firm also provides free marketing for nonprofits such as Share our Strength, which works to eliminate childhood hunger in the United States, according to Outside.

Bloomington-based bicycle distributor Quality Bicycle Products, which ranked 68th this year and 61st last year, helps the organization Free Bikes 4 Kidz give away 5,000 bikes every holiday season to kids in the Twin Cities. Quality Bicycle Products’ warehouse is outfitted with solar panels and bike parking for hundreds of employees. Longterm employees can take paid leave to represent the cycling industry and work with their nonprofit of choice.

The final Minnesota company on Outside’s 2013 list is Minnetonka-based Renters Warehouse, which ranked 74th. The property management firm, which came in 40th last year, reportedly donates regularly to the Sharing and Caring Hands organization in Minneapolis and the Susan G. Komen Foundation. The firm has an in-house theater for presentations, and employee contests offer perks such as $5,000 cash bonuses. Last year, Twin Cities Business recognized Renters Warehouse through its Small Business Success Stories program; click here for the story.

Colorado had the largest representation with 27 companies on the list, followed by California with 20 companies.