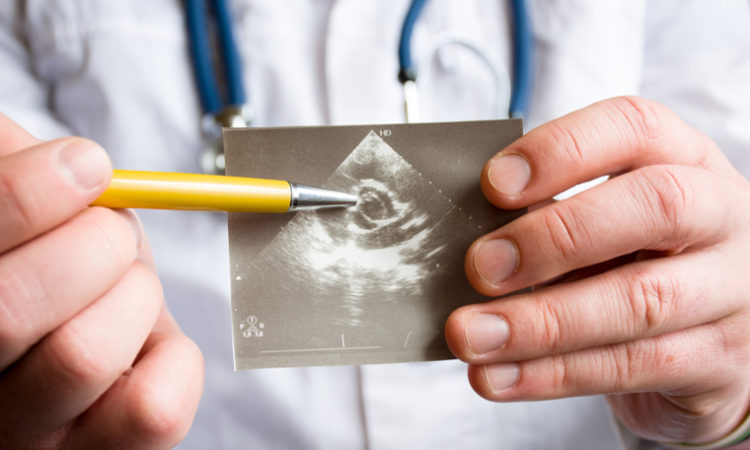 An ultrasound showing a possible case of mitral regurgitation.

The new capital will allow the Brooklyn Park heart therapies maker to hire up to ten new workers, expand into a larger headquarters, and fund new rounds of further testing of its AltaValve device.
By Sam Schaust
September 11, 2018

Local cardiologist Dr. Jeffrey Chambers, who founded 4C Medical and today is its chief medical officer and chairman of its board, was the originator behind AltaValve’s concept. AltaValve is intended to treat mitral regurgitation, or the leakage of blood backward through the heart’s mitral valve that’s occurs when the valve doesn’t close tightly each time the left ventricle contracts.

More than 200,000 cases of mitral regurgitation are reported annually in the U.S., according to Mayo Clinic. Unique to the AltaValve is its broad applicability to patients suffering from mitral regurgitation, many of which can’t be treated by current transcatheter mitral valve replacement (TMVR) devices.

“AltaValve will answer a real unmet clinical need,” said Philippe GÃ©nÃ©reux, co-director of the Structural Heart Program at the Gagnon Cardiovascular Institute in Morristown, New Jersey, in a statement earlier this year. “Delivered transseptally, this device will provide a treatment option for a broad [mitral regurgitation] patient population. This includes patients that can be treated with other [TMVR] devices, patients that cannot be treated by other TMVR device, and even patients with previously failed mitral repair.”

However, AltaValve does not yet have U.S. Food and Drug Administration approval and is still in the clinical testing phase of its development.

Depending on the size of the patient pool 4C Medical determines with the FDA, Thatcher expects enrollment for the later test will take between two to three years, followed by a year of follow-up before the AltaValve’s potential approval.

The $17 million raised will fund much of that, as well as the hiring of six to ten additional workers over the next six months to a year. Thatcher expects those new roles will pertain to supporting production, operations, research and development, and the clinical studies.

“We’re busting at the seams right now with 15 people and all the test equipment in a small, little space,” he adds. “We’ve already started the search process [for a new headquarters] and hopefully by the beginning of next year we’ll be in some new brick-and-mortar—location to be determined.”

Thatcher estimates 4C Medical’s current facility in Brooklyn Park to be about 2,500 square feet in size. The new site the company is shopping for Thatcher hopes will be nearly ten times larger, or about 20,000 square feet.

“That’ll accommodate all the work that has to get done during the early feasibility studies and pivotal trials,” he says, “so we shouldn’t have to move out of that space once we move in.”