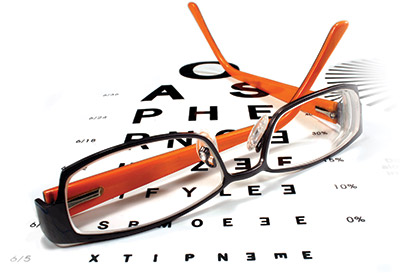 How Moss Optical stays competitive in the age of Luxottica's monopoly and Warby Parker.
By Megan Wiley
April 11, 2016

In In 2008, after 70-plus years at street level in downtown Minneapolis, Moss Optical moved to the skyway of LaSalle Plaza. “That’s when I made my decision not to compete with Visionworks and Target Optical and the chains that are my direct competition downtown,” recalls owner Kevin Moss. “My goal is to be the high-end shop in downtown Minneapolis, and I definitely purchase frames accordingly.”

Prior to moving, Moss carried many frames manufactured by optical powerhouse Luxottica, an Italian company that controls 49.5 percent of the U.S. eyewear retail market and has taken heat in recent years for monopolizing the industry and driving up the cost of prescription eyewear. In addition to owning 80 percent of global eyewear brands, including Versace and Prada, it owns insurance company EyeMed, as well as LensCrafters and Pearle Vision.

Today the only Luxottica brand Moss stocks is Ray-Ban. By offering a unique selection of specialty frame lines and customizable bespoke eyewear, Moss has carved a niche, while eliminating the need to price-match high-volume chains that embrace smaller margins.

But competition in eyewear doesn’t end there. In response to Luxottica’s market monopolization, new price-conscious eyewear retailers have sprung up in recent years, such as Warby Parker, which offers trendy frames that can be ordered online at low prices. “They are definitely stealing a lot of my business,” says Moss. “Those places sell glasses so cheap that I don’t even try to compete with them.”

But, Moss says, many frustrated Warby Parker customers end up in his shop. “There are so many measurements that go into creating a pair of glasses—this is a medical device, it’s not just a frame. It has to fit your bridge, it has to be the right width, the lenses have to be centered properly. Even if the prescription is right, if it’s in the wrong place in the frame you’re not going to see right. So for some people with a real simple prescription and a pretty standard face, it works out for them. But for a huge percentage, they get a piece of eyewear that they’re not seeing properly out of.”

As with many consumer goods, frame vendors recommend a retail markup of two to two and a half times wholesale. (Industrywide, lenses have a better profit margin than frames do.) However, being a small, family-owned business gives Moss the flexibility to tweak pricing at will, either to improve his margin, to offer a discount to a customer who otherwise couldn’t afford the glasses or to incentivize a customer to purchase multiple pairs. By comparison, says Moss, “at Target Optical, the prices are on the price sheet, and if you waver from that you’re going to lose your job.”