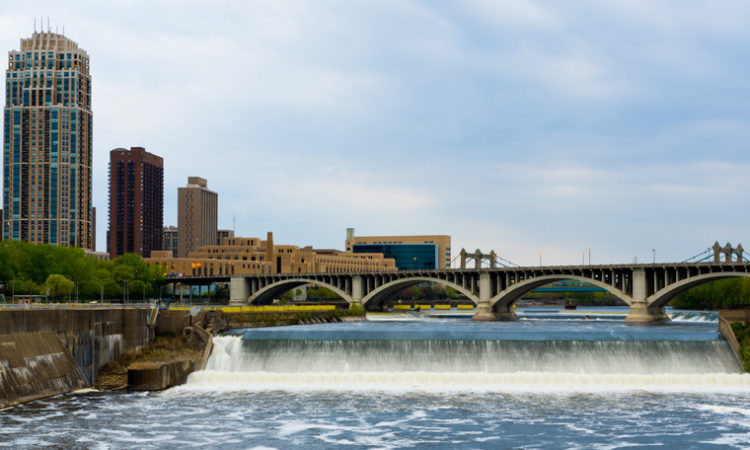 Mayor Jacob Frey and City Council member Steve Fletcher praised an Xcel and Public Utilities Commission decision to pull funding for the Crown Hydro project, as it’s no longer favored by the city or public.
By Amanda Ostuni
October 25, 2018

Crown Hydro, a planned hydroelectric power facility that’s been in development for more than two decades has received what’s likely a fatal blow, and it has city officials rejoicing. In a move praised by Minneapolis Mayor Jacob Frey and City Council member Steve Fletcher, Xcel Energy has issued a notice of termination of the grant awarded to the project.

Xcel handed Crown Hydro a renewable development grant contract in 2002 to help build a facility in the St. Anthony Falls Historic District alongside the Mississippi River. The Minneapolis-based utility provider also made a power purchase agreement with Crown Hydro. However, Xcel has canceled that agreement, too.

Xcel’s change of heart is in part a direct result of a Minnesota Public Utilities Commission order to withdraw the $3.5 million of grant money that remained. The PUC voted to pull the funding in August, and Xcel was responsible for complying.

The PUC vote was the latest blow dealt against a project that has faced several legal objections, as the tide of public opinion has simultaneously soured against it – fueled by the fact that the St. Anthony Falls area has evolved into something far different than it was when the hydroelectric facility was first proposed.

“In the 25 years since hydropower on the Mississippi River was first contemplated, the Minneapolis central riverfront has been transformed into a home of dynamic and growing neighborhoods, recreational activities and entertainment,” said Frey, in prepared remarks.

Now, Frey added, the city wants to continue revitalizing the riverfront “with the St Anthony Falls as its heart and soul.”

The Crown Hydro facility was to feature turbines and a power house 40 feet below ground, invisible to neighbors and visitors, be vibration-free and have no discernable effect on the flow of the falls, according to the project site. It was expected to generate enough energy for more than 2,000 homes and itself help revive the area.

But, according to extensive input PUC gathered from residents, community organizations, government entities and other stakeholders, now that the revival has happened without the facility, the promises of the project aren’t enough to keep people from feeling the facility no longer fits with the vision for the riverfront.

“The Mississippi River is one of the City’s most critical and valuable community assets,” said Fletcher, in a statement favoring Xcel’s decision to pull its deals with Crown Hydro. “It is up to all of us – residents, community organizations, and elected officials alike – to make sure that it remains accessible and vibrant for generations to come.”