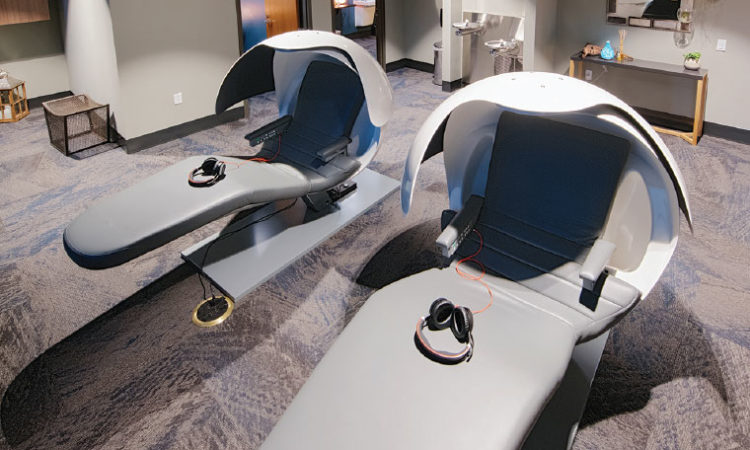 Tenants sleep it off at Fifth Street Towers.
By Burl Gilyard
January 01, 2018

Office building owners are perpetually updating, renovating and remodeling in an ongoing effort to keep properties appealing to current and potential tenants. Fifth Street Towers in downtown Minneapolis is no exception, having just wrapped up a multimillion-dollar renovation that includes new fitness, lounge, conference and co-working space for tenants. And the building now includes one amenity not found in other downtown office buildings: nap pods.

They are part of a larger emphasis on workplace wellness, says Erin Fitzgerald Wendorf, a principal with the local office of Houston-based Transwestern, on the building’s leasing team. “Happy employees make better employees,” says Wendorf. “We know that getting enough sleep is a really big part of our overall well-being.”

The pods allow users to recline in an enclosed space behind a privacy visor, in a contraption that looks something like a space-age dental chair—or more appealingly, a business-class seat on an international flight. Its technology uses a combination of lights, music and vibration to lull users to sleep, then wake them 20 minutes later.

“It puts you into a deep meditative state,” asserts Wendorf.

Two nap pods are on the third floor of the 150 Tower, the “amenity floor” for tenants. Since the space opened in October, Wendorf says that the pods are constantly in use.

In late 2017, Fifth Street Towers (which dates to the 1980s, and is owned by Fifth Street Towers Property LLC, an entity connected to California-based investment management firm PIMCO) was about 40 percent vacant in the wake of the departure of the Stinson Leonard Street law firm. Wendorf says that companies are no longer just looking to rent office space; they want a rich array of amenities to help attract and retain employees. She says nap pods are part of that trend.

“The game has completely changed,” says Wendorf. “It really is a war for amenities.” —Burl Gilyard