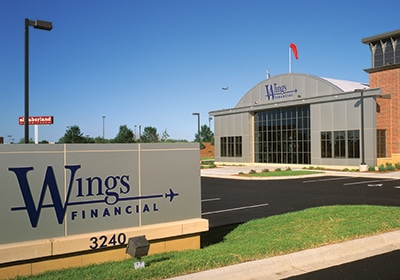 Wings Financial Credit Union was founded to serve Northwest Airlines employees, but it has catapulted beyond its aviation roots and is adding four new branches in Twin Cities suburbs. “Business has been growing, membership has been growing significantly,” Wings CEO Frank Weidner tells TCB. It’s growth that supports the need to operate 15 branches in the Twin Cities metro.

Wings, which has expanded to more than $4 billion in assets, will open branches in Eden Prairie and Blaine this month, and Woodbury in early December. In Savage, Wings will serve members from a newly constructed branch in early 2015.

As nonprofit cooperatives, credit unions don’t have to pay income taxes. That financial advantage was baked into federal law because credit unions got their start serving low-income and narrow affinity groups, says Mufaddal Baxamusa, who teaches finance at the University of St. Thomas.

“The line between the credit union and the bank is getting more blurred,” Baxamusa says, explaining that credit unions have added services, such as home mortgages and investments. He notes that federal law changes have allowed Wings and other credit unions to define their member pool ever more broadly, while the industry trend is for consolidation and growth—fewer credit unions serving more people. In Minnesota, credit union membership stands at 1.6 million.

In recent years, Baxamusa stresses, an increasing number of middle-income and upper-income people have joined credit unions because they can get more favorable interest and loan rates than at a bank.

Wings opened its membership in 2004 to all air transportation employees. In 2009, Wings decided to offer its services to anyone who works, lives or worships in a 13-county region of the Twin Cities. Then Wings gained 62,000 new members in 2010 when it reached merger agreements with City-County Federal Credit Union and Highgrove Community Federal Credit Union. Wings has about 205,000 members, and it expects to enroll 13,000 new ones during 2014.

Though many now bank purely electronically, Baxamusa says that people still want to live or work near their financial institutions, which is why it makes sense for Wings to add branches.