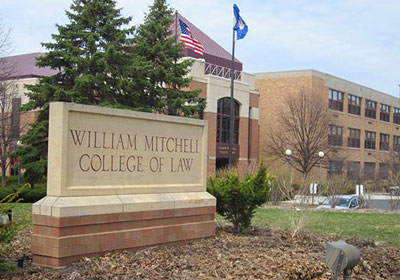 The combined entity will be called Mitchell|Hamline School of Law, with most of its functions on the old Mitchell campus.
February 23, 2015

Two St. Paul law schools announced Friday that they will merge: William Mitchell College of Law and the Hamline University Law School will become the Mitchell|Hamline School of Law. It will be primarily located on William Mitchell's campus, near Summit and Victoria.

The merger comes at a time of lower enrollment at law schools and fewer jobs for graduates around the nation, and while there have been merger talks in the past among Minnesota's four law schools, Friday's announcement was unexpected.

In a note to Mitchell alumni, sent ahead of the formal announcement, Mitchell Dean and President Eric Janus said the merger won't happen until it's approved by the American Bar Association.

He said the new school will be run by an independent board of directors, and include faculty and staff from both institutions. A new president and dean, Mark Gordon, will join the school July 1.

“The decision to combine the law schools was made primarily for our students. As the pace of innovation and change in the profession increases, so too does the need to provide students with expanded opportunities to gain experience and learn from some of the best faculty in the world.”

The new school will have about 900 students, Janus said.