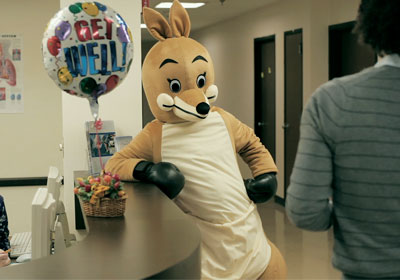 A brand of premium licorice hopes to hit it out of the park with its Minnesota Twins–based ad campaign.
September 01, 2011

A guy bites into a piece of candy—and a giant wallaby punches him so hard that he’s sent flying into the next room. Kind of a violent way to get people to buy your brand of licorice, isn’t it?

Call it brutality or just physical humor (I’ll say the latter). In any case, it’s the approach that a newish brand of Minnesota licorice is taking in its first round of TV commercials, which premiered this spring.

“At the end of the day, it is candy, and there is something kind of youthful and fun and silly about candy, especially licorice,” says Doug deGrood, creative director for Minneapolis ad agency Gabriel deGrood Bendt (GdB), which developed the commercials. “We had no qualms about taking it into that fun, silly, slapstick realm.”

The product is Wiley Wallaby Australian-Style Liquorice. The ads may be slapstick, but the product’s European spelling tips you off to the brand’s aspirations. “We noticed ‘Australian licorice’ coming into the market and saw an opportunity,” says Shane Kangas, vice president of sales and marketing with Minnesota company Kenny’s Candy, which produces Wiley Wallaby. “The opportunity was an avenue to expand our licorice offerings . . . and enter the premium end of the licorice category.”

Kenny’s Candy is a division of KLN Family Brands, a family-owned snack, candy, and pet food maker headquartered in Perham, a town of about 3,000 people northeast of Fergus Falls. Besides its own lines, KLN makes a number of private-label products in these categories for various customers.

Wiley Wallaby licorice, launched in 2007, is a different kind of animal for KLN. Selling at a higher price than most candy (though lower than highend imported licorice), it comes in seven flavors and has a juicier, richer flavor profile than your standard licorice whips. It’s also more substantial, with a build like a beefy, chunky Twizzler. “Licorice appeals to all ages,” Kangas says. However, Wiley Wallaby “definitely has an adult focus.”

Last year, the company saw that the brand needed a higher profile in order to expand its distribution. How to reach a grown-up audience with a sense of fun? Answer: baseball. Specifically, Minnesota Twins broadcasts. Charlie Nelson, national director of sales and marketing for KLN Family Brands and a member of the Nelson family that owns KLN, says that the Twins convey a “family feeling” that reflects his company’s image.

In choosing GdB to develop the commercials, KLN tapped an agency that has worked with many outstate brands, most notably St. Cloud–based Gold’n Plump. (GdB also created commercials for KLN’s Barrel O’ Fun potato chips featuring Twins manager Ron Gardenhire that ran during the 2010 season.) KLN may have premium ambitions, but its marketing budget for this project was a value play. GdB had to work with “precious few media dollars,” deGrood says. “We knew that it needed to be something that would be somewhat sensational and with any luck get talked about.”

The commercials were concepted this past winter and shot in March for a May air date. deGrood credits Runner Runner, the Warehouse District company that did the filming, for “production values [that] are pretty high, given the actual cash outlay for it.” That slim budget meant that the commercials had to provide a fat punch in subtle ways.

“What I love about them is just that you have so many memorable little features,” deGrood says. “You’ve got the wallop part, obviously. And this very quirky, memorable costumed character.”

A major element of that quirkiness is the wallaby costume itself, which also provided a way to do more with less. “We were going down the road of spending a lot of money to make a custom, proprietary mascot costume,” deGrood recalls. “We ended up not going that route because we found this thing on line just doing a Google search and ordered it for 150 bucks. We expected it to be a total joke. But when we saw it, it was like, it’s so bad, it’s good.”

Other touches that deGrood likes include the sound of a didgeridoo (an Aboriginal Australian musical instrument) whenever the giant wallaby appears. It’s a sound that’s both ominous (almost in a Hitchcockian manner—think of the scary bird sounds in Psycho, if that’s not overstating it) and kazoo silly.

“To me, that’s a memorable brand cue,” says deGrood, who also is delighted with the “over-the-top, Russell Brand– like” voice that provides the tagline at the end.

The commercials aren’t the only connection Wiley Wallaby has with the Twins. The brand also sponsors the “Wallop of the Game” segment on the Twins postgame television show.

According to Kenny Nelson, president and CEO of KLN Family Brands, the company is “very pleased with the commercials and the response has been great to them. With our increased Wiley Wallaby sales and all the new locations one can buy Wiley Wallaby, [the commercials have] boosted our business.”

A more thorough analysis of the campaign will come at the end of the Twins’ season. Says deGrood: “We’ll put our ear to the ground and evaluate where we go next with it—whether we saw enough of a bump that it’s worth taking this creative into other markets, developing round two of the campaign to run next year, all that kind of stuff.”

Round two with Wiley Wallaby? Make sure the actors are wearing mouth guards.