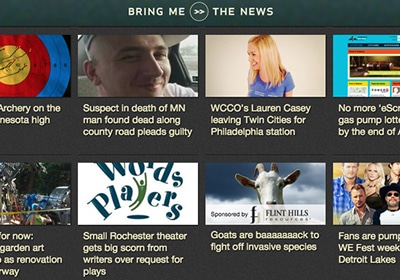 Several days ago, the local news aggregation website, BringMeTheNews, a.k.a. “Rick Kupchella’s Bring Me The News,” announced it had been sold pretty much lock, stock and barrel to the Pohlad family’s radio operation, Go96 Media, specifically Go 96.3­ FM, home of modern pop music and your Minnesota Twins.

Dollar figure terms of the deal were of course not disclosed. But the curiosity of media watchers was drawn to two facets of the deal on the radio side. Namely, why did the Pohlads believe they needed to buy a news aggregation service? And now that they have one, what are they going to do with it?

As for Kupchella, the interesting part is his interest, gestating for quite a while, to focus entirely on a national build­out of his health/medical “curation” service, PresentNation, which now becomes the official name of his company.

More on those numbers in a minute.

“We looked at both the buy versus build models,” says Pohlad, “and it would have been far more expensive if we tried to put something like that together ourselves.”

The context there is that Pohlad is adding a news staff of at least 10 to his payroll. (Both he and Kupchella say sales personnel will not be coming along because of overlap with Go96 Media staff.)

He also likes the demographic match­up between Kupchella’s audience and the somewhat bifurcated Go 96.3 crowd, a venue where modern-­to-­alternative pop music fans butt up against the much broader Twins fan base. Said Pohlad: “We don’t see our model changing in the immediate future.”

BMTN, if I understood Pohlad, will initially (and simply) provide enhanced value — its curated news —­­ to GO96, with more significant interaction to come months or more down the line.

“We do think there’s opportunities in this on the radio side,” said Pohlad.

The rising popularity of podcasting, something every station­ with­ a­ clue is testing, would be an obvious initiative. Likewise, BMTN may — may —­­ jump start the station’s video production. There are, however, no plans to turn BMTN’s “news producers” — people scanning the internet from desks ­­— into traditional reporters.

“The conversation here was, ‘How can we do radio better?’” he said. “We didn’t see that happening by just dropping in your average junk on­line news. That’s why we looked at Rick and his operation.”

A skeptical buyer has good reason to look gimlet-eyed at claims of “a million-plus monthly on­line audience.” As Mike Keliher, a client relationship director at the Minneapolis PR firm Fast Horse explains: “A quick check at Compete.com shows a little over 200,000 unique visitors for BringMeTheNews in the last month.”

A primer for all the non-nerds out there: A “unique” visitor is one particular person coming to a website, no matter how many times he/she clicks in. “Visits” is the number of times a “unique” visitor checks in per month. For example, if I dial into the Star Tribune twice a day for a month, that’s … 60 “visits” by one “unique.” Another metric, “page views,” counts each individual page/story viewed, or at least clicked on by a vistor.

But as Keliher explains: “All of that is open to interpretation when you’re asked to assess the value of those numbers.”

Online metrics are more accurate than the old and absurdly unreliable Arbitron radio ratings diaries, a laughable process where random listeners toted around a little paper book and promised to faithfully log every show they listened to over the month(s) they served as an “average listener.” Yet the devil is in judging how engaged the audience is, says Keliher, at least if you’re trying to sell advertising off those numbers.

Clearly, the Pohlads felt confident enough in the metrics (at least in relation to what they agreed to pay for BMTN) to make the move.

As for Kupchella, the long­time KARE­-TV reporter who departed the station in 2009 and opened shop with BMTN three months later: the cash-­flush American health and medical marketplace is now the object of his entrepreneurial interests.

One of the better “explainers” on Twin Cities TV when he was in the reporting game, Kupchella freely admits his admiration for former KARE and WCCO­-TV weatherman, Paul Douglas, a relentless serial entrepreneur. “He’s definitely a role model for me. You have to admire what he’s done.” (One of Douglas’s start­ups was called ‘WeatherNation.”)

Kupchella also has a knack for the modern corporate marketing patois. Like when he explains his commitment to PresentNation in terms of looking for “ways to advance the scalability of the national health care model.” Selling off BMTN, he says, “will allow us to capitalize our health care service.”

He describes PresentNation as a “very similar model to BringMeTheNews” only with a better chance of faster … “scalability.” Unlike BMTN, which was most valuable to regional media outlets (mostly radio stations) who lacked localized news content, the health care landscape is choked with vendors and purveyors of every imaginable description. He quickly rattled off “healthy living,” “brain health,” “aging,” “diabetes” and “heart health” as among the “primary categories” PresentNation would be covering.

“It is a fee­-for-­service model that can be customized quite easily,” he said.

Recalling early aspirations to take the BMTN model to other large metro areas, Kupchella says, “We got to a point where we realized that BringMeTheNews was going take a lot longer than we hoped to scale up market-­by-­market. We see PresentNation as better model for doing what we want to do.”