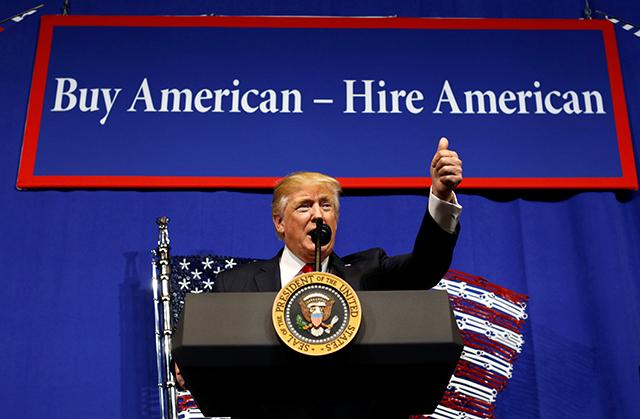 At first glance, Minnesota workers and their families might find these protectionist policies attractive. In the end, however, restricting trade will not solve our stateâs economic problems.

President Donald Trump diagnosed America’s economic problems in his inaugural address: “For many decades, we've enriched foreign industry at the expense of American industry.” In other words, imports are killing our industries such as mining and manufacturing and the prescription is to keep imports out through protectionism.

This is both the wrong diagnosis and the wrong prescription. First, the diagnosis: Productivity growth in manufacturing industries combined with slow growth in the demand for manufactured products means that these companies need fewer workers. Contrary to popular wisdom, American companies moving abroad for cheaper foreign workers contributed only slightly to this problem.

Second, the prescription: Will restricting sugar imports and imposing tariffs on foreign steel help either the national or Minnesota economy? No, it will probably make things worse.

Protectionism, employment, and economic theory
Common sense might lead you to think that the U.S. economy is better off when we impose tariffs. After all, increasing the price of imported goods means we will probably buy fewer goods from abroad and produce those goods here at home instead. VoilÃ , more jobs and higher incomes for Americans.

Economic theory says otherwise. Yes, imported goods will become more expensive and so we might produce more of those goods at home. However, we must also answer two additional questions about the effects of a tariff.

First, how will countries (e.g. China, Mexico) react to our tariff? Will they simply accept it or impose tariffs on U.S. products in retaliation? History suggests that retaliation is almost certain. Thus, Minnesota farmers will find it more difficult to sell their products abroad, as will other industries that rely on exports. This might even lead to decreased employment and incomes in these sectors.

Second, if employment and production are increasing in the sectors benefiting from the tariff, while employment and production are decreasing in the industries hurt by the tariff, what is the net effect on the U.S. economy? The answer, of course, is it depends. It depends on the relative strength of the two effects, which in turn depend on the sensitivity of consumers to changes in prices, which in turn depends on consumer preferences about imported versus domestically produced goods, and so on.

When we add all of this up, economists usually find that a tariff ultimately results in, at best, no effect and most likely a reduction in total U.S. employment and production. Only rarely do economists find a tariff beneficial and even then, the effect is extremely small.

What do the models tell us?
The Peterson Institute for International Economics (PIIE) modeled the effects on the U.S. economy of the trade policies Donald Trump proposed during the presidential campaign. Their model embodies the effects that I described above.

The PIIE economists note that, “Assessing the prospective trade policy of Donald Trump is difficult, because, unlike his carefully scripted opponent, he has often communicated his positions extemporaneously, with none of the usual policy paper backup produced by traditional presidential candidates. In addition, some observers and analysts regard his statements as mere negotiating gambits.” They concluded that the most likely outcome was what they termed the Full Trade War scenario: “the United States imposes a 45 percent tariff on nonoil imports from China and a 35 percent tariff on nonoil imports from Mexico. China and Mexico respond symmetrically, imposing the same tariffs on U.S. exports.”

In the PIIE simulations, total U.S. employment falls about 4 percent below how the economy would have behaved without the imposition of tariffs. That is, the employment losses created from decreased exports and income losses from the changing production structure of the U.S. economy wipe out any employment gains created by reducing imports. In brief, the type of protectionism does not create more American jobs.

Minnesota’s employment would shrink by 4.2 percent under this scenario. The map below shows how individual counties in Minnesota are predicted to fare in this scenario. 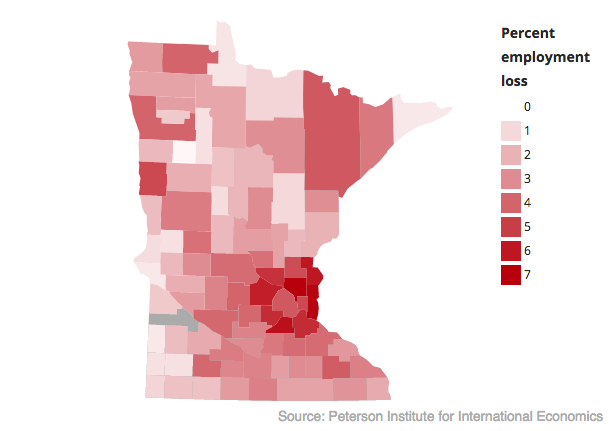 In general, the more exposed to international trade the bigger the hit to county employment.

According to PIIE, “Iron and other metallic ore mining and aluminum production [would be] … among the most intensely affected sectors,” with national employment in this industry falling by 10 percent. The map above illustrates this: St. Louis County would lose roughly 4 percent of its baseline employment, about 3,500 jobs, while Lake County loses 3.5 percent, and both Carlton and Itasca counties lose about 3 percent of their jobs.

Consequences
PIIE concludes that if Trump’s trade restrictions are implemented, “these proposals would provoke retaliation by U.S. trading partners, unleashing a trade war that would send the US economy into recession and cost millions of Americans their jobs.”

At first glance, Minnesota workers and their families might find these protectionist policies attractive. In the end, however, restricting trade will not solve our state’s economic problems. Instead, we need to close our educational and income gaps, invest in transportation and communication infrastructure, and improve our citizens’ human capital so that they can start new businesses and be ready for the jobs of tomorrow.