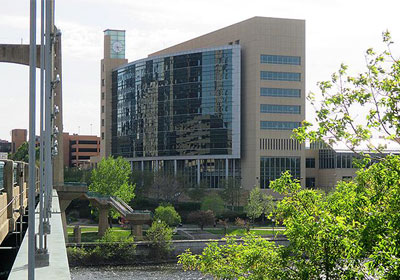 Removing the Federal Reserve Bank of Minneapolis from the rolls of a special assessment zone for the Nicollet Mall redo will save the bank $267,841.83 over the next 20 years.
May 24, 2015

A lot of property owners in downtown Minneapolis wanted to be taken out of the special assessment area that will pay for half of the $50 million Nicollet Mall renovation.

When the Minneapolis City Council meets Friday, it is expected to approve the mall project — along with a special assessment to be levied on property owners in the area to pay off $25 million in bonds. But the council also is expected to approve a motion to remove one property from the rolls of the assessment zone: the Federal Reserve Bank of Minneapolis, a move that will save the bank $267,841.83.

It isn’t that the city thinks the bank, one of 12 Federal Reserve Banks across the country, deserves the break. The council has rejected requests by dozens of other property owners who either think they are too far from the mall to enjoy any increase in value or believe they shouldn’t be charged the full assessment because they are nonprofits.

Instead, the council will exempt the Federal Reserve from paying for the project because federal law requires it to. At a committee of the whole meeting on Wednesday, Council Member Kevin Reich said he would bring forward a motion Friday to take the bank property out of the plan.

The Federal Reserve is unique with regard to tax policy. As pointed out in a May 4 letter from the bank’s senior vice president and general counsel to the city, as a federal entity, it is exempt from most taxation. Federal law contains a “limited waiver” of the this exemption for “taxes on real estate” held by the Fed.

“However, under established law … special assessments such as those proposed to finance Nicollet Mall Reconstruction Project No. 9916 are precluded from the Bank’s general tax immunity,” wrote Niel Willardson. He goes on to remind the city that the Fed won a U.S. District Court decision in a previous special assessment dispute in 1967. Other decisions in the 8th U.S. Circuit Court of Appeals came to the same legal conclusion.

Unlike general property taxes which pay for general government purposes, special assessments pay for infrastructure improvements such as streets, sidewalks or sewers that are adjacent or close to individual parcels.

According to Hennepin County tax records, the bank building on Hennepin Avenue overlooking the Mississippi River has a market value of $83 million and is taxed at $3,342,268.72 for 2015.

That is the opposite circumstance of nonprofits, including churches, that are exempt by the state constitution from paying regular property taxes but are required to pay special assessments. Some of those entities are asserting that because the Nicollet Mall redo goes beyond normal infrastructure improvements, they should not have to pay the full assessment.

The Basilica of St Mary, for example, is being assessed $50,000 for the mall project over the next 20 years. The University of St. Thomas will pay $141,000. Westminster Presbyterian Church will pay $147,458. Under state law, property owners can appeal their assessment in District Court. While that could result in a lower assessment, it is less likely to win a property removal from the assessment.