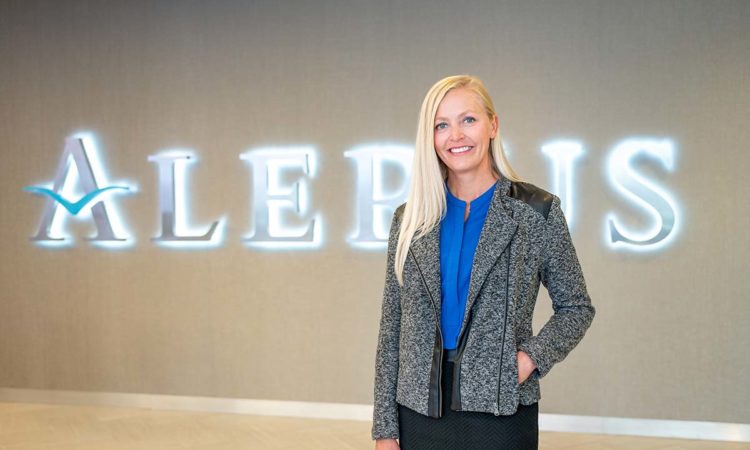 Katie Lorenson is slated to become CEO of Alerus in January 2022. Alerus

Katie Lorenson, who’s slated to take the reins as CEO of Alerus Financial Corp. in January, says the Twin Cities metro remains a “high priority” for the company.
By Dan Niepow
October 05, 2021

Alerus Financial Corp. traces its roots back to the late 1800s, when it was still the First National Bank of Grand Forks. Throughout much of its history, Alerus has primarily focused on its North Dakota business, but the bank’s leaders are now targeting growth in another market: Minnesota.

The company, which is still officially headquartered in Grand Forks, didn’t even enter the Minnesota market until 2003, when it purchased a St. Paul-based pension services provider. But today, the North Star State has become a key part of Alerus’s business strategy, says CFO Katie Lorenson, who’s slated to succeed long-time CEO Randy Newman in January. About 90 percent of the bank’s mortgage originations occurred in Minnesota, according to Alerus’s second-quarter earnings report. What’s more, just under half of all of Alerus’s loans are with Minnesota customers.

“The Twin Cities market is a high priority for the company,” Lorenson said in a Monday phone interview. “We’re continuing to gain momentum there.”

In some ways, Lorenson herself is emblematic of the bank’s transition. She grew up in the Grand Forks area, but she’s lived in the Twin Cities metro for the last 20 years. Today, she lives and works in Shorewood. Like many other big companies, the bank’s corporate functions are still “very much hybrid,” though Alerus still has in-person staff at its branches.

“The Twin Cities market has grown to be our largest, in terms of the balance sheet, the number of employees, and the number of clients,” said Lorenson, who will become the first female CEO of Alerus.

Of course, it’s worth noting that Alerus has been making moves in the Twin Cities long before Lorenson joined the team. Current CEO Newman, who joined the bank in 1980, helped push the bank into Minnesota. Under his watch, Alerus executed 24 acquisitions, 13 of which were based in Minnesota.

Are there any more Minnesota mergers or acquisitions on the horizon? Lorenson declined to share specifics, but she noted that “Alerus has a long history of acquiring, and we intend to continue to do so in the future.”

“We have the capital and currency with our IPO, … as well as the business model to continue to grow our company,” she said. The company’s 2020 IPO netted around $60 million. Alerus first announced plans to sell its shares on Nasdaq in August 2019.

The company wrapped up its most recent acquisition in late 2020, when it formally completed its purchase of Colorado-based Retirement Planning Services Inc.

When it comes to future acquisitions, Lorenson said that a company’s mission and culture are often more important than financial metrics. For that recent Colorado buy, Lorenson noted that Alerus leaders “spent our initial time with those owners and that team not talking about numbers, but really talking about the culture, the mission, and the vision of both companies.”

Though Alerus has been doing providing other financial services here for years, the company didn’t have any actual branches in Minnesota until 2007. Two years later, the company opened a branch in Arizona. Those moves represented “an intentional part of our strategic plan to diversify our geographic footprint and expand into metropolitan markets outside of North Dakota,” Alerus officials wrote in the company’s 2020 year-end financial report.

That same report specifically calls out the Twin Cities metro for its “attractive market demographics, including strong household incomes, dense populations, low unemployment, and the presence of a diverse group of large and small national and international businesses.”

At the end of 2020, Alerus counted about $3 billion in total assets. That makes it a fairly small player when it comes to the big Wall Street Banks, such as Wells Fargo, whose assets are reportedly worth $1.9 trillion. But Lorenson says that her bank’s smaller size is a “differentiator” in the market. If anything, the company’s smaller size certainly made the switch to digital services much easier.

“We have never been, nor are we now, a branch-heavy retail bank,” she said. “A lot of business can be done without coming into the office.”