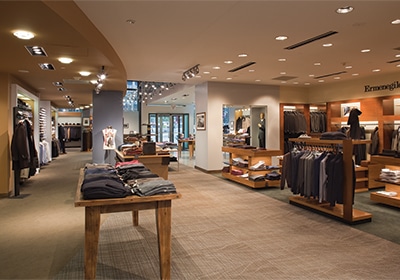 Why Hubert White Has Outlasted Its Competition

On the verge of its 100th anniversary, the downtown Minneapolis menswear boutique has outlasted its competition.
September 01, 2014

Despite the closures of Elsworth, Len Druskin Man, Neiman Marcus, and soon Saks Off 5th, men’s retail in downtown Minneapolis continues to thrive in some quarters. In fact, almost 100 years in, upscale menswear boutique Hubert White is experiencing its strongest sales ever.

The store primarily sells designer suits to the downtown workforce, always a selection of core labels, including top-sellers Ermenegildo Zegna and Samuelsohn.

everything else
(sportswear, accessories, shoes)

Owner Bob White credits the store’s unparalleled longevity to the staff’s ability to foster long-term relationships not only with clients, but also vendors and other stores. Which is why, when Neiman Marcus closed its Minneapolis store, Hubert White snatched up two salespeople and a head tailor, as well as adding two coveted Italian designers to its roster, Isaia and Brunello Cucinelli. “That transition was made easier because we had stayed friendly all these years,” says White.

The timing was fortuitous, as the store had just begun a renovation when Neiman’s announced its closure. The $200,000 gut job included new Zegna and Eton departments, a rejiggered shoe department and all-new lighting, as well as structural changes to open up the space. While the store dabbles in trends like raw denim and of-the-moment heritage lines, half of White’s sales come from its main suiting designers.

Hubert White’s clients range from 19 to 90, but the sweet spot is upwardly mobile men in their late 30s. “That age bracket cares a lot about how they look and they’re also entering a period where many of them are becoming more successful,” says White. “You put those two things together, and that’s a very good market for us.”

In recent years, Saturdays have become the busiest day of the week due to an influx of new clientele from regional cities like Sioux Falls and Rochester, metro suburbs, and especially new downtown residents—all of which portend an evolving downtown retail market.

Despite downtown retail’s continued struggles, White notes that luxury residences are sprouting, the workforce is strong, restaurants are busy and plans for Nicollet Mall are encouraging. “Retail will follow for sure,” he says. “Long-term, downtown retail needs to be good for us to prosper.”