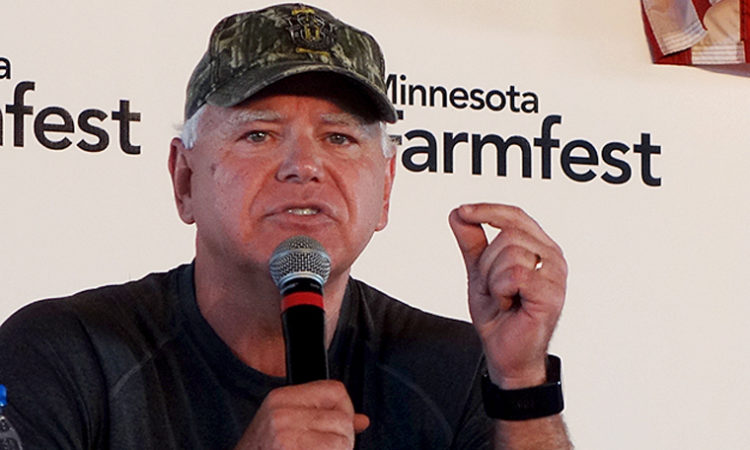 Tim Walz speaking to attendees of the gubernatorial debate at FarmFest in August. ( Photo by Peter Callaghan/MinnPost)

Why Greater Minnesota Interests Feel Optimistic About the 2019 Legislative Session

When the Legislature begins its work Jan. 8, a battery of lobbyists for Greater Minnesota interests will be there, arguing for a variety of proposals that they believe will boost the rural economy.
By Gregg Aamot
January 03, 2019

When groups representing rural Minnesota interests released their wish lists for the 2019 legislative session, some of the items looked familiar: a boost in funding for the Local Government Aid program, proposals to generate housing, more money for broadband expansion.

Yet while the issues might not be new, some of the players at the Capitol are, including Gov.-elect Tim Walz, the former U.S. congressman from Mankato whose campaign theme – “One Minnesota” – heartened some rural leaders who have long felt left behind by the Twin Cities metropolitan region.

“I’m a ‘One Minnesota’ kind of guy, so I’m kind of optimistic,” said Dan Dorman, the executive director of the Greater Minnesota Partnership (GMNP), a collection of businesses, nonprofits and other groups. Dorman, a former Republican state lawmaker, said he was committed to supporting a gubernatorial candidate from Greater Minnesota – regardless of party. So, in the fall election, he filled in the oval next to the Democrat Walz’s name.

Much of the chatter at the fall convention of the Coalition of Greater Minnesota Cities (CGMC), held in Alexandria, centered on the possibilities of a Walz administration, said Bradley Peterson, the executive director of the organization, which represents about 90 cities. “Our members are pretty excited that there is going to be a rural governor,” he said. “That opens up, hopefully, some opportunities and brings some fresh perspective to the process here for the next four years.”

Indeed, when the Legislature begins its work Jan. 8, a battery of lobbyists for the GMNP, the CGMC and other groups will be there, arguing for a variety of proposals that they believe will boost the rural economy.

Walz represented the 1st Congressional District – a largely rural and heavily agricultural swath of southern Minnesota – for 12 years before running for governor. In an interview with MinnPost, he reiterated the unifying theme of his campaign. “The idea that we have separate economies (in the Twin Cities and in rural Minnesota) simply is not the case,” he said. “The Minnesota economy – and by extension the state’s quality of life – is predicated on having a diverse economy.”

Besides a change in the governor’s office, the Legislature will have a different makeup, too, with Democrats controlling the House and Republicans controlling the Senate. (Last year, Republicans controlled both chambers). Lawmakers will also be working with a projected $1.5 billion budget surplus. While only a projection, “it does give us a little opportunity to argue for some things,” said Gary Carlson, the director of intergovernmental relations at the League of Minnesota Cities (LMC), which represents cities in all regions of the state.

One of those things will be more money for Local Government Aid (LGA), the resource-sharing program that helps many cities cover their expenses. The LMC, the CGMC and the GMNP are all asking for the same thing: an increase of $30.5 million in funding for the program – on top of the state’s current $534.5 million allocation – that would bring funding back to 2002 levels. Walz campaigned for such an increase and said this week that it would likely be part of his administration’s budget proposal.

Meanwhile, agricultural groups will be at the Capitol in search of tax relief in exchange for the creation of “buffers” – swaths of land between fields and waterways that are designed to filter phosphorus and other chemicals. The organizations will be returning with a request that failed last year: a $50-per-acre property tax credit on land that has been converted to buffers.

Walz favors such a rebate – but not the source of funding that has been proposed to pay for it: money generated by the Clean Water, Land and Legacy Amendment. Plato farmer Brian Thalmann, the president of the Minnesota Corn Growers Association, said his group is open to other funding ideas.

Here’s a closer look at those issues and a few others related to the rural economy that will be worth watching as the legislative session unfolds:

Another pitch for LGA

About 90 percent of Minnesota’s cities receive some money from the Local Government Aid program, which helps them pay for services that are generally covered by property taxes. The program has its critics; while some small towns get nearly half of their budgets from LGA, many wealthier cities receive little, if any, money from the program. According to a League of Minnesota Cities tally, 22 cities held referendums to raise property taxes last fall, with 16 of the measures passing. For Carlson, the LMC lobbyist, that’s at least one indication that LGA funding is needed more than ever. Two years ago, lawmakers agreed to boost the annual appropriation by $15 million. Rural interests also want lawmakers to approve annual inflationary increases for LGA.

In Minnesota, farmers are now required to create “buffers” of natural vegetation between their fields and waterways – 16.5 feet along ditches and as much as 50 feet along lakes, rivers and streams. Research shows that such buffers help to filter phosphorus and other chemicals that run off of fields and into the water. Last year, farmers sought a property tax credit of $50 per-acre of buffer land, arguing that they should be compensated for land that has been taken out of production. The plan bogged down over disagreements about funding the tax credit, estimated at $27 million over two years, so agriculture interests will be back this year with the same request (and perhaps others). “We strongly feel that a rebate of some sort is a small token going back to landowners,” said Thalmann, the Minnesota Corn Growers Association head. 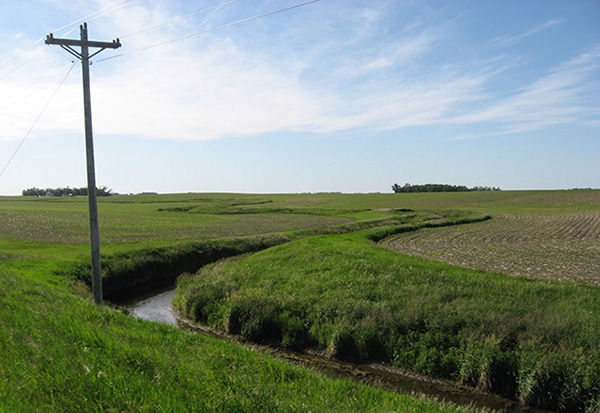 Research shows that buffers help to filter phosphorus and other chemicals that run off of fields and into the water. (Photo from Creative Commons/MPCA Photos)

In recent years, rural leaders have been looking for ways to address a shortage of adequate housing for the workers who are needed in manufacturing, agriculture and other industries. An existing state program, chronicled by MinnPost here, provides grants to small cities and counties for repairs to existing homes. The Greater Minnesota Partnership is asking for $20 million for grant programs focused on increasing the supply of housing units in growing communities. Walz, meanwhile, told MinnPost that housing is at the top of his priority list, symbolized by the first commissioner he chose to publicly introduce: Jennifer Ho, his choice to head the Minnesota Housing Finance Agency. “This is an issue in every community – from workforce and teacher housing in Fairmont and Rochester to folks in Worthington working in animal agriculture to north Minneapolis,” he said. He added: “The issue is deep but solvable, and we have a commitment to getting it right.”

Money for highway and street repairs

Money to maintain highways and fix city streets will also be part of this year’s rural requests. The Coalition of Greater Minnesota Cities and the Greater Minnesota Partnership, for instance, are asking for $200 million for Corridors of Commerce – a state Department of Transportation program that funds maintenance and repairs on highways that are heavily trafficked with freight. In 2017, the Legislature put $8 million for each of two years into the state’s Small Cities Assistance Program, which helps towns with fewer than 5,000 residents pay for street repairs. Both the CGMC and the GMNP would like to see $50 million set aside for city streets. The League of Minnesota Cities is seeking $28 million for the small cities fund. 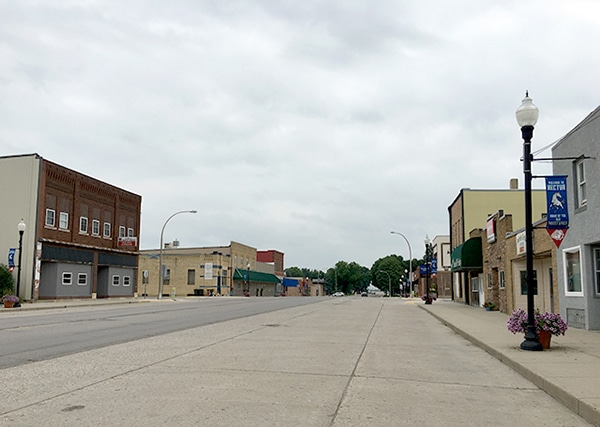 In 2017, the Legislature put $8 million for each of two years into the state's Small Cities Assistance Program, which helps towns with fewer than 5,000 residents pay for street repairs. (Photo by Corey Anderson/MinnPost)

Rural groups plan to continue their push for the expansion of high-speed internet service into underserved regions. Last year, the Legislature set aside $20 million for the Border to Border Broadband Development Grant Program, which provides grants to help providers pay for the infrastructure they need to expand their reach. The Greater Minnesota Partnership is asking for $50 million for the Border to Border program, with at least half of the money targeted to areas that lack access to 2026 state speed goals — 100 megabits down, 20 megabits up. Rural leaders argue that they have little chance of luring businesses, like this high-tech one in Gibbon, without solid internet service. “We hope this is something that gets more funding, given the jobs and the industries and the schools that rely on this,” said Irene Kao, the intergovernmental relations counsel at the League of Minnesota Cities.

For the past few years, rural leaders have been sounding the alarm about a growing problem: the lack of child care options for working parents. Some towns have worked with businesses to create child care centers, like this project in New York Mills. Last fall, during the Coalition of Greater Minnesota Cities annual meeting, city officials identified the dearth of child care as one of the issues “potentially holding back growth” in rural areas, Peterson said. Between 2006 and 2015, according to figures compiled by the state Department of Human Services, the number of day care providers in Minnesota dropped by nearly 2,000 to around 6,400. The CGMC is seeking $10 million for a child-care facility capital assistance program, as well as aid for employers that provide their workers with child care benefits. The Greater Minnesota Partnership, among other ideas, is calling for more investment in the state’s child-care tax credit program.