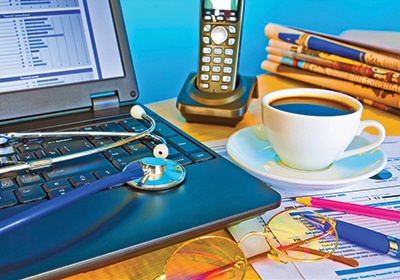 Why Employers Are Investing In Work-Site Health Clinics

Minnesota is always near the forefront of national health care trends. The well-proven idea that preventive care improves outcomes and lowers health care costs is broadly accepted in the business community here. That’s why we have many employer-sponsored wellness programs, and it’s why there is now a growing trend toward work-site medical clinics.

“Most of the companies [who start on-site clinics] understand that the only way to really change the amount of money they spend on health care is through lowering the risk of their population, which is both the employees and their spouses and dependents on the plan,” says Mick Hannafin, a consultant at David Martin Benefit Consulting Group in Edina. “It’s not the five office visits a year that are killing the system, it’s the no office visits and the 200-day hospitalization to take care of somebody who has become catastrophically ill.”

Left to their own devices in a health care market where deductibles are high and copays are a deterrent, many people won’t go to the doctor, especially not for routine yearly visits. That means chronic conditions often go undiagnosed and untreated until they become expensive and life-threatening. And people with busy lives often have a hard time taking time off work to go to the doctor’s office. On-site clinics change the equation. “What you’re trying to do is lower the cost of their health care, but in doing so, you’re showing your employees that you really do care about their health,” Hannafin says. “You’re breaking down the barriers to a lot of the health care issues, you’re getting them out in the open, you’re talking about them, you’re increasing productivity, you’re reducing absenteeism, you’re doing all sorts of different things that are really paying dividends.”

Regions Hospital in St. Paul opened an on-site medical clinic (administered by HealthPartners, which is part of the same group of companies) for its 4,500 employees about a year ago. Regions’ manager for employee health and wellness Denise Herrmann says it’s part of an overall package of employee benefits and well-being solutions. Hospital management thinks that employees who are healthy do their best work, so it provides a way for them to take care of minor health problems like strep throat, skin rashes, or twisted ankles, without throwing off their whole day.

Some clinics also dispense free medications, so that the caregivers don’t have to wonder whether patients are getting their prescriptions filled.

“The dispensing is really a reflection of the employer’s formulary,” says Joe McErlane, CEO of NeoPath Health, a St. Louis Park company that specializes in on-site clinics. “We look for meds we purchase at higher frequencies, and if we can bring them on-site at a lower cost, we absolutely do that. At some of our [client sites], we have 65 medications, at other [sites], we have 145.”

McErlane says the point of these clinics is that they are “barrier-free.”

“You reduce the four barriers that exist in traditional health care: temporal, geographic, relationship, and knowledge,” he says. “You can do that by removing copays and deductibles, and I think the advantage there is shared on both sides. For the patient, it is an easier experience to get in, and they don’t have to dig into their wallet. They like that. And for me, if I need to chase down a $20 copay, I’m going to spend more than $20 getting that $20. You know what I mean? It’s just a no-brainer.”

Both the health care and human resources communities take privacy of medical information extremely seriously. So it’s important to note that even though on-site clinics are located in or near employer facilities, they’re administered by outside parties that keep completely separate records.

“All of these companies just partner with or engage or contract with a known medical provider entity, whether it’s a Park Nicollet or a HealthPartners or a NeoPath,” Hannafin says. “Employees understand that while the employer is perhaps paying a set fee for these services, that it’s not owned by their organization, so therefore none of their medical information is going to be shared.”

At Regions, the administrator actually is the same company, but Herrmann says the clinic maintains records that are completely separate from the hospital’s and are not on the same system.

“Even though it’s a part of the organization and we’re all together, we’re very deliberate in that this is no different than if our provider was located across the street,” she explains. “And we’ve been able to communicate that to staff. We also thought maybe people would be worried that somebody would see them coming or going from the clinic, but we’re a busy occupational health department. We have people coming down here all the time for all kinds of things.”

John Hansen, director of worksite health for HealthPartners in Bloomington, says when his company recruits providers for on-site clinics, it brings together a slate of qualified candidates so that the employer can find someone who’s a good fit for the company culture. While health care costs have continued to climb across the country (although the rate of increase is slowing), he says his clients have seen their cost trends flatten out. And while national medication compliance rates hover in the 50 percent range, the number is closer to 100 percent among employees who use on-site clinics.

“It’s worked amazingly well, and that’s not even including the productivity gains of keeping people at work, or just the employee satisfaction,” he says. “They really look at this as a benefit, and I think once the clinic’s in, they’d never give it up.”

Hansen says when he was first involved in creating work-site clinics, some of the industry literature claimed employers had to have at least 1,000 employees on site to make it cost-effective. That is almost never the case, he says.

McErlane sets the bar even lower. “Ideally, for us, we try to look for groups that have at least 250 to 300 employees in a single location or within a mile of each other in separate facilities,” he says.

Location is a factor, Hannafin says: Even if all the employees work at a single facility, if their families tend to live outside a 15-mile radius, it may mean the clinic will get less use among spouses and dependents, who might prefer providers closer to them. But numbers aren’t the be-all and end-all. Other aspects matter, such the demographics of the employee population, the culture of the company, whether top management is behind it 100 percent, and what kind of wellness programs are already in place.

NeoPath runs several on-site health clinics in Twin Cities school districts and considers them ideal environments. “You’re looking at busy, busy work schedules, to the half-hour,” McErlane says. “When a teacher or other school employee has to leave the district for health reasons, they continue to be paid their wages, but the district has a responsibility to bring in a substitute, so now we’re paying double. That’s the advantage there.”

U.S. Bancorp currently has six on-site health clinics, three of which are in the Twin Cities. Employee Relations Director Katie Lawler says that anecdotally, free on-site clinics are especially convenient for the bank’s large groups of hourly workers—such as call center employees—for whom getting away for half a day to go to a doctor’s appointment is extremely impractical.

In almost all cases, even at the smallest companies, on-site clinics are open five days a week. Many employers stagger the hours the clinics are open to make sure there are times that are convenient for everyone.

Regions Hospital has employees working around the clock. “We operate a 24-hour, seven-day-a-week operation,” Herrmann says. And the employee clinic has to be available to all employees. “Our clinic is open seven hours [a day], five days a week. We stagger the times so that we have a 7:30 start Monday, Wednesday, and Friday, but then we have a late-morning start on Tuesday and Thursday so the provider is here later in the day to catch people who might be coming in for second shift.”

Similarly, Hansen says clinics in schools are often open early some days for the teachers and bus drivers, but late other days so that there are convenient hours for their spouses and dependents.

For Regions Hospital, there was practically no up-front cost associated with starting an on-site clinic. They just found an exam room and re-allocated it.

But even for other types of companies, the start-up costs aren’t usually excessive. Most consultants put the number at $50,000 to $100,000, depending on factors such as the availability of water and electricity in the space.

Of more concern are factors such as buy-in, planning, and marketing. “There’s no value if it doesn’t get used,” says Al Hofstede, vice president of consulting for Corporate Health Systems, a benefits administration company in Eden Prairie. “So there’s marketing it, making sure there’s an appetite for it. You have to do the marketing to make sure employees know this is something that’s really going to benefit them and it’s going to benefit the health plan over the long term.”

“You won’t be able to do it without senior leadership support,” Herrmann says. “So whatever you need to do in order to build that business case, do it. And then it’s a matter of good project planning: knowing your population, figuring out what kind of hours are they going to need, and where’s the most convenient place to place it.” For these reasons, she strongly advocates working with a consultant who specializes in on-site health care clinics, because they can help both analyze the business case for the clinic and implement it once the project is underway.

But the costs of buildouts and consultants tend to be justified by the savings inherent in a work-site health clinic approach. “Typically, depending on how the volume works out, we can see per-unit visit costs about 50 percent less than running it through a community clinic,” Hansen says. “We have an administrative fee, and then everything else gets passed through at cost. If you drive around and you look at some of the really nice clinics that are built, they’ve got a lot of money in bricks and mortar. We don’t have that. We’ve got a small space at a site. The employer built that out, and there’s no rent being paid or any of that sort of thing. So we’re really lowering that admin cost as well.”

McErlane says that often, when a new program is started, there are already chronically ill employees whose care is beyond the scope of primary care and will continue to cost a lot of money. For that reason, it can take a few years for the real savings to become apparent. Yet, he says, the return on investment should and will increase over time. He estimates it will take about 36 months for an on-site clinic to really bend the trend when there are high-cost claimants in the group.

“But it also makes a difference on an incremental basis in terms of primary care delivery, dispensing, and the other factors [that] are very hard to place value on, such as accessibility and convenience,” he says. “Nobody’s lost money with us, I can tell you that, and everybody has produced a return on investment. We design it and price it in a way that they have a win and we have a win.”