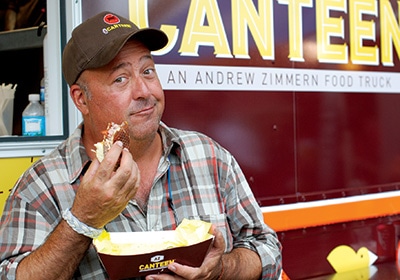 Take a look at Marquette or Second Avenue in downtown Minneapolis any weekday and you could be convinced that food trucks have taken over downtown. There are more of them than ever. Business must be good. But it wasn’t good enough to keep Twin Cities-based Travel Channel personality Andrew Zimmern in the game.

His truck, AZ Canteen, hit the streets early in the craze, offering sustainably sourced fare from around the world, including goat burgers, veal tongue and gumbo. It traveled to Miami Beach and the Super Bowl. But it is no more, because Zimmern basically found a better venue to serve on-the-go fare.

“Food trucks are a nice business if you and I worked the truck every day,” Zimmern explains. “But it’s hard in Minneapolis with a five-month season, where people only think of a food truck as a place for lunch. In Austin and LA and Seattle, they are all-day revenue generators. If we were in SoCal we’d still have the truck.”

Zimmern says food trucks locally function best as complements to brick-and-mortar restaurants when there are economies of scale and infrastructure to support catering, which offers a built-in margin—unlike the daily lunch lineup, which is dependent on weather, parking spaces and the other trucks that show up.

Zimmern’s experience on the truck convinced him his fare might work well in sports venues and he began licensing his brand and recipes for use at Target Field. That led to a comprehensive relationship with global food service operator Aramark, which operates at US Bank Stadium. Or as Zimmern explains it, “Daddy’s day job [TV] gave him visibility, which translated to the opportunity to use the brand for something with a higher rate of return.”

“The truck delivered us the licensing model without the truck’s downside,” Zimmern explains. “Last summer on the truck we made probably $40,000, but we worked so hard. Showing up at places with 15 trucks and 1,000 customers isn’t really profitable. Licensing has a higher rate of return and easier hours.”

As for the truck, it was returned to local restaurant supply house Chameleon Concessions, and is back on the streets of town in another guise.