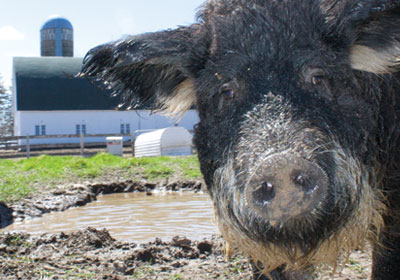 The Mangalitsa served up, snout to tail, at Uptown’s Il Gatto in May was some pig—wooly, and carrying just half the meat and twice the fat on its carcass that a standard commercial pig would. But with Mangalitsas, a Hungarian breed that was nearly extinct 20 years ago, the fat’s the thing. It makes for intensely flavored and marbled meat. The high-oleic-acid fat has a melt-in-your-mouth quality. Mangalitsas sell for a 30 to 40 percent premium over other prime pork.

Il Gatto Chefs Jim Christiansen and Tim KcKee got their Mangalitsa from one of the few producers in the U.S., Provenance Farm near Taylors Falls, where another Parasole chef, Stephen Jones of Salut in Edina, and his wife, Cristina Cruz-Jones, a manager at Il Gatto, have been raising Mangalitsas for two years. The pastured pigs get a mix of oats, barley, and lots of grasses. “They have a pretty good life,” Cruz-Jones says.

Christiansen and McKee called their first annual Festa Mangalitsa “a celebration of all that pork can be”—and that included dessert. As the 18-course menu came together, pastry chef Adrienne Odum contemplated her options: sweet biscuits made with Mangalitsa lard, or candied pancetta and chocolate.