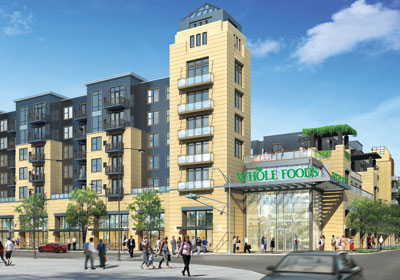 After Whole Foods opened stores in St. Paul and Uptown Minneapolis in the ’90s, almost a generation passed before the Austin, Texas-based natural foods grocer opened another Twin Cities location, though it expanded at a breakneck pace through the rest of the Midwest. Now, several factors have led the company to dive headfirst into the Cities—putting it on track to triple its local footprint over the course of less than three years.

Whole Foods earned $342.6 million on $10 billion in revenue last year, up 43 percent and 12 percent, respectively. It doesn’t break out financials for individual metro areas or stores, but after years of “slow, positive growth” at its two Twin Cities locations, sales shot up recently as demand grew for natural foods, says David Schwartz, vice president of Midwest operations. “That’s really what made us realize there are other opportunities for us here.”

The company added a Minnetonka store in October 2011 and an Edina location this past April; in 2013, it will open stores in Maple Grove and downtown Minneapolis, where it will anchor a new apartment complex at Washington and Hennepin avenues—all within a stone’s throw of a Lunds or Byerlys. “And we’re actively pursuing two or three more stores in the Twin Cities,” says Schwartz.

While they aren’t expanding at the speed of Whole Foods, other upscale grocers are adding stores in an increasingly competitive local market. That’s due in part to income trends, says Jim McComb, a retail and real estate consultant, and president of Minneapolis-based McComb Group.

As the incomes of the top 25 percent of households grow, the other 75 percent have stagnated, “creating an opportunity for upscale stores and putting pressure on everybody else,” he says.

Edina-based Lunds & Byerly’s opened a downtown Minneapolis Lunds last month and plans another at the Penfield development in downtown St. Paul. (The company says it has seen a “slight sales impact” from Whole Foods at its Ridgedale Byerly’s.) Meanwhile, upscale chain The Fresh Market is eyeing the Twin Cities, says McComb.

Is there sufficient demand to sustain the rapidly growing market? “I don’t think there is,” says Brennan. “Longer term, there are going to be losers”—those unable to differentiate themselves based on price or product offerings. (He predicts Whole Foods’ natural and organic specialization will provide sufficient differentiation for continued success in the upscale segment.)

When asked whether the Twin Cities’ grocery market has reached its saturation point, McComb says “we’ve got more grocery space than is logical at the moment. Could a shakeout occur at the upscale level? It could.”