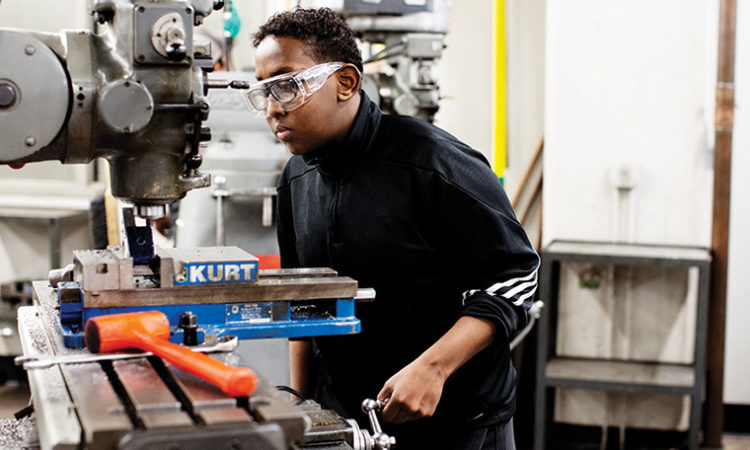 Who Wants to Work in Manufacturing?

“My friends are working at Kmart or fast food places,” says the 19-year-old graduate of Lincoln International High School in Minneapolis. He had been planning to pursue a bachelor’s degree in engineering, but when a Dunwoody representative spoke to his senior class last year, explaining that he could get hands-on experience along with an associate’s degree, Mussa jumped at the opportunity. Now he operates milling machines every morning and takes classes in the afternoon before working a 3–9 p.m. shift at Tolomatic, an automation manufacturer in Hamel.

“I love that I’m already doing hands-on work,” he says. Born in Kenya and raised in England before his family moved to Minnesota when he was in high school, Mussa thinks he will stay here after graduating. “There are so many jobs in manufacturing. Minneapolis is a great place.”

The state’s 8,300 manufacturing companies—many of which can’t seem to recruit new talent fast enough—wish more students realized what Mussa has discovered. Manufacturing comprised the largest private-sector portion of Minnesota’s gross domestic product in 2017. According to Minneapolis-based Enterprise Minnesota, a manufacturing industry consulting firm, the sector contributed $49.2 billion, or 16 percent of the state’s total GDP for that year. At $21 billion, the manufacturing sector’s 2017 payroll was Minnesota’s second largest, with annual wages an average of 16 percent higher than the average wage for all industries.

We aren’t just trying to hire unemployed people. We want to hire people who have choices.”
—Kevin Riedemann, DuFresne Manufacturing

In 2018, Minnesota’s manufacturing companies created 7,025 new jobs—22 percent of all new jobs in the state. Put simply, manufacturing is an economic mainstay for Minnesota.

But if manufacturing is a thriving housecat now, it could be a tiger—if more Minnesotans wanted manufacturing jobs. Throughout the state, manufacturing companies have difficulty finding workers with the skills these employers need—or even workers who want to learn those skills. As a result, they hire fewer employees and take on less business than they might if workers with manufacturing skills were easier to find.

“There may have been a time in manufacturing when companies were taking in “mirror-foggers”—if you could breathe, you were hired on,” says Kevin Riedemann, vice president of operations at DuFresne Manufacturing in Vadnais Heights. Those days are over. “We aren’t just trying to hire unemployed people. We want to hire people who have choices,” he says. “There’s excitement, discovery, growth, and learning in many manufacturing jobs.”

Older people are leaving and not enough new ones are coming in at Alexandria Industries. The firm’s Minnesota operations include aluminum extrusion, machine fabricating, and plastic-injected molding for solar panel mounting systems, aluminum boats and docks, snowmobile parts, and gun accessories and components. A 2016 plant expansion in Alexandria increased potential machining capacity by 50 percent, but the company can’t hire fast enough to operate at that level.

“We have an aging workforce, and trying to find replacements for people with 35 or 40 years of experience gets to be difficult,” says Tom Schabel, the company’s CEO. “We’re having to automate more and more in order to sustain the business we have.”

The company is also trying to interest more potential employees in manufacturing jobs.

“We used to work closely with technical colleges and then we realized that fewer people were going to technical colleges,” Schabel says. “So we went to high schools, but too often kids or their parents have already made up their minds against manufacturing or for a four-year degree. So we moved to middle schools, doing community open houses and working with robotics teams.” In middle school, Schabel finds that students still have relatively open minds.

Older students and their parents often envision factory work as repetitive, boring, and dirty. That’s an outdated vision, Schabel says. “You can come in with a two-year technical degree and supervise a million dollars’ worth of technology and three robots.” By dismissing manufacturing jobs out of hand, he says, students miss out on opportunities for good careers.

Alexandria Industries derives about 30 percent of its total revenue outside Minnesota, Schabel says. That’s partly because of where the company’s aluminum suppliers are located, as well as Minnesota’s tax laws and environmental regulations. The biggest single factor, however, is Minnesota’s dearth of potential employees.

At Faribault Woolen Mill in Faribault, the product is different but the personnel problem is the same. “Some of our workers have been with us for decades,” says CEO Tom Kileen. “The challenge is to find new people who can come in and learn from these workers and eventually replace them.” 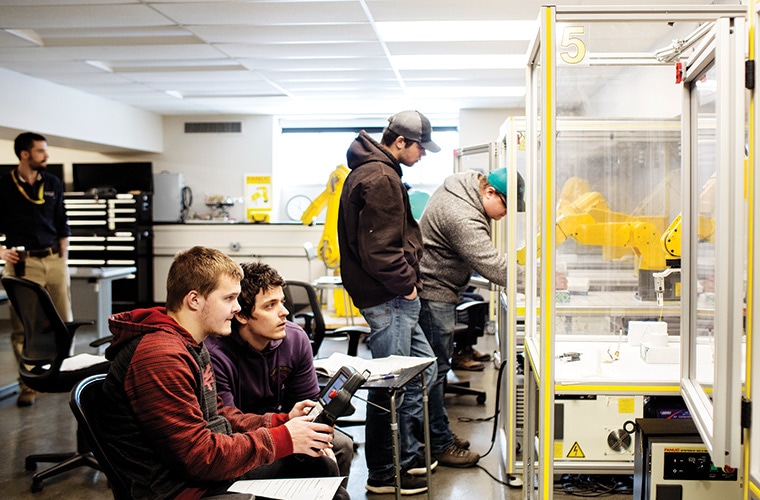 Dillon Branch and Jackson Kiely work on robotics at Dunwoody College of Technology. Both students already have jobs in their field. (Photo by Eliesa Johnson)

In Rogers, Minneapolis-based Graco makes equipment that pumps, meters, and measures fluids from paint and glue to industrial lubrication and candy coatings. “We probably manufacture 90 percent of everything we make either in the greater Twin Cities area or in Sioux Falls, S.D.,” says Dave Thompson, Graco’s worldwide director of engineering.

Graco’s products are made under high pressure, so the company needs a talent pool that’s well-versed in hydraulics and electrical engineering. Before the 2008 financial crisis, it was fairly easy to find the people he needed, Thompson says. Since then, it’s gotten harder, at least in part because the recovery has created very low state and national unemployment rates. “Everyone with desirable skills and a work ethic who wants to be employed is employed right now,” Thompson observes.

Thompson recruits students and new graduates from technical schools and universities. “We take students on as interns. They get a chance to learn and grow, and we get to see both the really good talent and the average talent. Then we can offer them jobs. We might offer a rising senior a job for after graduation,” he says. “This has been a great way to get fresh talent. They’re educated, they do all the things that older people might find challenging on the computer, they make you look at things with fresh eyes, plus they can learn from older employees.”

Finding older experienced employees is more difficult. For office and technical positions, Thompson relies on networking and he’s working his networks harder than ever, he says. The company has also increased wages for assemblers and machinists, as well as offered premiums for working second and third shift.

Overall, Thompson says, he’d take the workforce he has now, plus an increase of 3 to 5 percent. “We’re short machinists and mechanical and electrical engineers,” he says. “I’m trying to add 12 jobs, and I’ve got five spots left. We always have some number of jobs open, but right now it’s about four times the usual.” 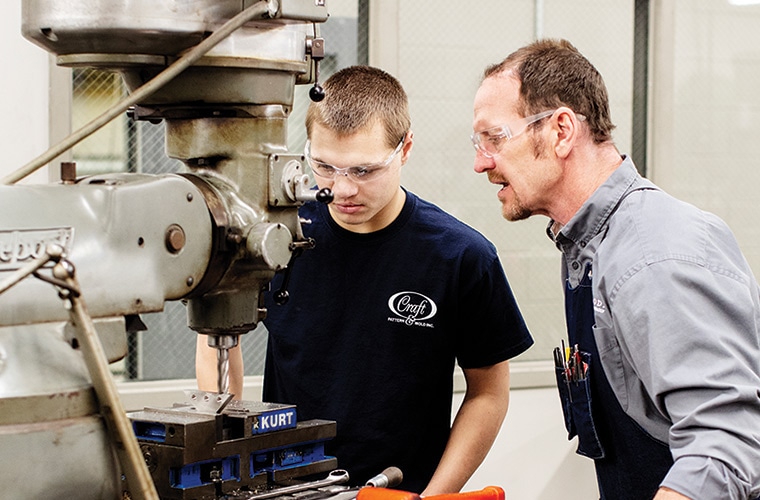 The strong economy, however, means that fewer desirable workers are available. “Our challenge has been to find talent in this market,” says Bill Gray, Uponor North America president. “Across the board, access to skilled labor and an educated workforce is a problem.”

It’s not the only problem Uponor is facing. “There’s a trucker shortage, because people aren’t entering that industry,” Gray says, both because the lifestyle is unappealing and because, in a time when marijuana is legal in 34 states, there are fewer people who can pass the drug test that’s part of getting a commercial driver’s license. Freight rates are up
25 percent, Gray says, because truckers are in demand.

Political uncertainty and recent tariffs on Chinese steel are also challenges, Gray says. “There’s a lot of steel in the building industry, and a price increase can make or break a construction project. We see a lot of projects … sitting on the sidelines, waiting for steel and aluminum prices to become more certain.”

Finding the right employees, however, is still the biggest problem, not just for Uponor, but for its longtime customers. “We’re strictly manufacturers, but we also care about whether our customers have the skilled people they need to install and use products. The shortage has driven us toward polymer solutions, because they require less skill to install,” he says. 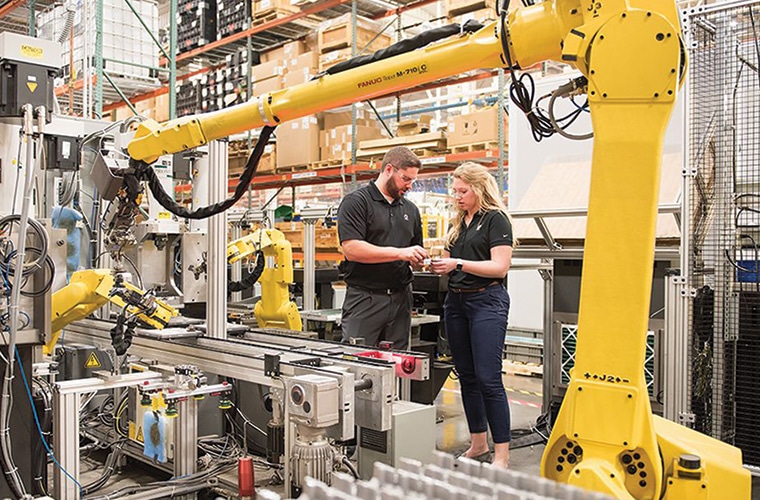 If there’s a shortage of manufacturing workers, it’s logical to think that area technical colleges will step in and train more qualified people. Dunwoody starts 25 students in its two-year machine-tool program every fall. The Minneapolis-based school would love to increase the size of that cohort, says E. J. Daigle, Dunwoody dean of robotics and manufacturing, but he doesn’t see enough interested students.

“Manufacturing in general is still thought of as dirty, dark, and dangerous,” Daigle says. High schools have eliminated or drastically reduced shop classes, so students aren’t exposed to modern computer numeric control (CNC), a method for automating machine tool control by embedding software in a microcomputer attached to the tool. Even schools that still have shop programs typically find CNC equipment too expensive to install.

Manufacturing in general is still thought of as dirty, dark, and dangerous.”
—E.J. Daigle, Dunwoody College of Technology

Kids who want to make things have different ambitions, Daigle says. “The engineering design program, with its 3-D printing and computer-aided design [CAD] software, is bursting at the seams. It’s full every year, because it looks like a sexy, state-of-the-art career.” But not every manufacturing process involves CAD, welding, or 3-D printing, Daigle adds. Machining is manufacturing’s common denominator.

If he could get the students, Daigle says, he could place many more. “In 17 years at Dunwoody, I have never seen such a demand for machinists. Every company that comes out wants to hire machinists. At any given time, there are probably 1,500 open machining jobs around the state of Minnesota. Dunwoody will graduate 14 machine tool students in May 2019, and we have more than 400 requests to hire them,” he says.

In fact, most of the first-year students in the program are also hired, even though they have a year and a half of school left. “If companies don’t hire them now, they won’t get them,” Daigle says. “They’ll work part time until they graduate, and in the industry full time over the summer, and then on a flexible, part-time basis during their second year.” 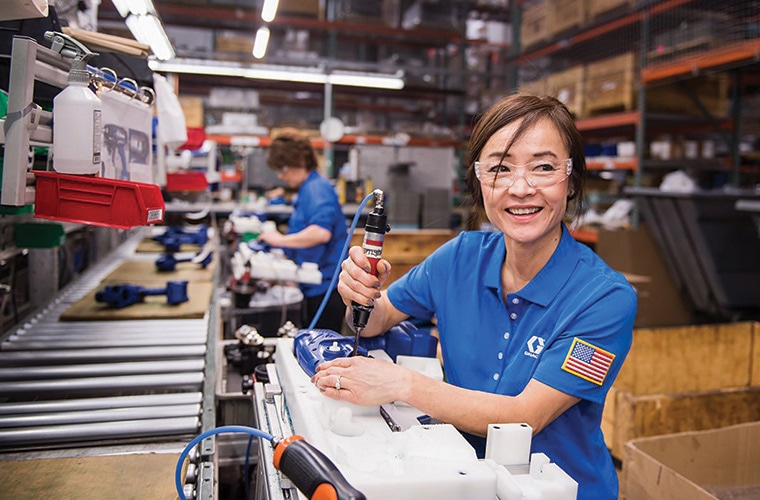 “Some companies will say, ‘You don’t need to go back to school if you want to stay and work full time.’ We start 24 or 25 machine tool students every year and get back 14 or 15 of them after the first summer. Two semesters of training can get you up to $27 an hour with full benefits. Five years ago it was $16 an hour. Now we don’t entertain less than $22 an hour,” Daigle says.

The school has had some luck with recent immigrants. St. Paul College and Hennepin Technical College, which are both less expensive than Dunwoody, where tuition for a two-year associate’s degree runs more than $44,000, have had “great experiences” with a larger number of Somali-American students, Daigle says. At Dunwoody, the student body is 80 percent white and male.

Increasing student loan burdens for four-year degrees have the potential to drive more students toward two-year technical programs, and the U.S. unemployment rate won’t be this low forever. Young people may eventually realize the potential that manufacturing jobs have to be both interesting and remunerative. Until then, however, the industry will go on playing an employment-based game of musical chairs.

$49.2 billion contributed from manufacturing in 2017

Ingrid Case writes about business issues and is a frequent TCB contributor.