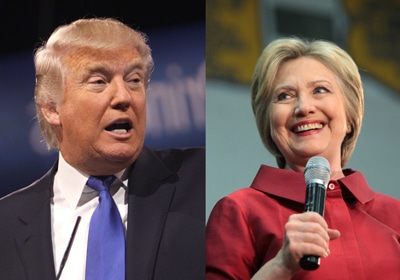 Which MN Businesses Might Be Most Impacted By The Election?

The answer: Maybe all of them. But, Minnesota’s manufacturing industry in particular could be hit the hardest depending on how Trump alters international trade deals.
November 18, 2016

UPDATE: Two key market indicators — the S&P 500 and Mexican peso — were identified by University of Minnesota associate professor Paul Vaaler as figures that would likely experience significant activity in reaction to the presidential election results. As more results trickled in around 8 p.m., the value of the Mexican peso sank from 18.2 pesos to each U.S. dollar to 20.7 pesos by midnight. In early morning trading, the reaction to Trump's victory pushed the S&P 500 down about 0.5 percentage point, then up 1 percent, and back down all within the span of an hour. The value of the S&P 500 index has since leveled near its Monday close.


As Donald Trump nears the start of his tenure as the 45th President of the United States, experts from the University of Minnesota have been weighing the impact that he could have on the state’s largest industries.

Free trade had been a frequent point of contention between Republican Trump and his opponent, Democrat Hillary Clinton. Both have stated opposition to the Trans-Pacific Partnership (TPP) to some extent, while their stances on the North American Free Trade Agreement (NAFTA) and the Transatlantic Trade and Investment Partnership (TTIP) have been more divided.

Clinton, who had been generally pro-trade throughout her career, had backed away from certain trade deals over concerns that American jobs were being lost in the process. Trump’s approach had been comparatively more hardline as he had opted to “rip up” all existing international trade deals and place significant tariff increases on Chinese goods.

Paul Vaaler, an associate professor for both the University of Minnesota’s law and business schools, believes Trump’s plan to redraw NAFTA carries a potentially negative impact for Minnesota businesses, in particular.

“I think from a standpoint of Minnesota trade, which is substantial in terms of manufacturing and commodity goods, a Clinton victory would be better news for Minnesota exports and investment abroad, especially to Canada and Mexico,” Vaaler said. “For Minnesota, we would care both about the trade volumes with Canada as well as Mexico because we can’t avoid renegotiating those trade agreements multi-laterally. And if that were to happen, both sides would suffer.”

In the state’s private sector, manufacturing is a behemoth, making up 16 percent of Minnesota’s total GDP in 2015. Nearly every industry exports valuable goods and services out of Minnesota, including: medical companies (needles, catheters and parts totaling $864 million in 2015); computer and electronics companies ($3.5 billion); processed foods ($1.6 billion); and transportation ($2.3 billion).

Upwards of 8,600 Minnesota businesses trade goods abroad, which employ some 120,000 workers in the state and around the country.

“In terms of Minnesota alone, we’re the 16th largest exporter in the U.S.,” said Cosette Creamer, an assistant professor of political science at the University of Minnesota. “That’s a large number of jobs that are supported through exports of goods and services abroad, and it would potentially be the industry hit the hardest.”

Outside of NAFTA, Creamer believes Minnesota businesses also stand to be affected by the candidates’ views on trade with Europe (through the TTIP) and trade with Asia and Australia (through the TPP).

“The TTIP, in particular, is more important in terms of moving forward with trade liberalization, if that’s the direction that the U.S. wants to move,” she said. “During the past 10 years, our exports to a number of markets have increased. Some of the TPP countries — for example, Singapore, South Korea and Australia — exports from Minnesota to those markets grew by 82 percent in 10 years, which is pretty significant.”

Arguably one of the most striking differentiators between the two major-party candidates, Vaaler said, was how both domestic and international investors have reacted to the ebb and flow of the campaign season.

“One of the interesting ironies is that Clinton’s policies are seen as more pro-investor,” he said, “and the reason that’s extraordinary is because we usually associate that with Republican policies.”

Market swings can be traced to the first presidential debate in September, Vaaler pointed out. “During that time, from 9 o’clock at night when the debate started until 10:30, the S&P 500 rose steadily—increasing about half a percentage point,” he said, “which in 90 minutes translates to an incredible annual return. And nothing was going on other than she was beating up on Trump and markets were responding to the likelihood of policies that would come with a Clinton administration.”

Recent jumps in the S&P 500, a vital market index that measures the stock performance of the top 500 U.S. companies, have been recorded as recently as last weekend when FBI director James Comey once again exonerated Clinton.

Vaaler anticipates the S&P 500, which has risen nearly 3 percent this week, will experience a notable amount of activity based on Tuesday’s result. So too will the value of the Mexican peso, he said.

“Going back to that first debate, the Mexican peso during that same hour and a half went from about 19.9 pesos to the U.S. dollar to 19.5,” he said. “That’s about a 3 percent increase.”

The rate has risen since, standing today at 18.5 pesos per U.S. dollar, a two-month high when faced against the greenback.

Given Minnesota’s second-largest trade partner is Mexico, the shifting value of the country’s currency will bear some affect on the buying and selling of goods.

“I think the S&P 500 and the peso are both really interesting, forward-looking indicators of what business and finance ‘voters’ think is going to happen,” Vaaler said. “Throughout the evening as the results come in, I would expect a really volatile movement in the both of those.”