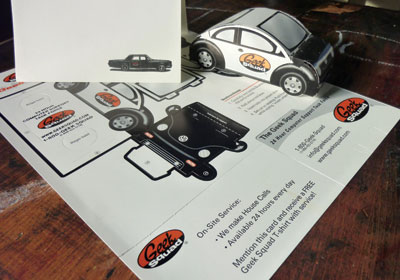 Where Old is New Again

Blinc Publishing is a local pioneer in the use of "analog" printing and graphic design. Target, for one, digs the look.
January 01, 2012

Blinc Publishing’s place of business feels like a magical realm—the magic of history and old machinery. It’s located atop the national-landmark Northwestern Building in St. Paul’s Lowertown, on the only floor the building’s leisurely elevator doesn’t reach. Once you get to the eighth floor, you have to climb a set of stairs to what Blinc founder Bill Moran calls “the penthouse.”

Entering Blinc’s 1,000-square-foot space, you should first notice the 1927 Chandler and Price letterpress, which Moran had moved in from his family’s printing business in Green Bay, Wisconsin. And yes, Moran does use it.

The past few years, he’s been using it a lot. Even in the digital age, or perhaps because of it, dozens of letterpress printing shops (names include Studio on Fire, Lunalux, and Dude and Chick) have sprung up locally. Though letterpress primarily has been used for business cards, wedding invitations, and other stationery, the newer generation is printing posters and other designs that blur the line between commerce and art. And Moran’s been doing that kind of work since he opened his studio (after stints at 3M, where he earned a “record of invention” for a intravenous flow regulator dial he designed, and Norwest Banks) in 1996.

Letterpress projects aren’t the only example of Moran’s taste for what might be called “modern analog.” Not far from Moran’s hometown of Green Bay, in the small Wisconsin town of Two Rivers, stands another palace of magical history: the Hamilton Wood Type and Printing Museum. It’s housed in an 85-year-old factory that was home to the Hamilton Manufacturing Company, which among other things produced fonts carved from Wisconsin rock maple for the printing industry. Wood type has long given way to offset printing (not to mention digital); in 1999, the facility was converted into a museum.

Moran paid his first visit there in 2002 and found himself instantly enchanted. He volunteered his services making posters, designing the museum’s Web site, and writing, designing, and printing a promotional book. In 2009, Moran became the museum’s artistic director, developing educational and promotional programs.

In 2009, Chicago’s Kartemquin Films released Typeface, a documentary about the Hamilton Museum. Moran, who was in the film, made a presentation when it was shown at the Walker Art Center. Afterwards, “I got a lot of encouragement from my friends and local designers to market the museum harder,” he recalls.

At this point, Target enters the tale. Moran connected with a friend in the retailer’s trends and forecasting department, “who quickly saw the visual value” of wood type, he recalls. “She got a lot of her colleagues excited about it.” This summer, Target released its Vintage Varsity collection of back-to-school clothing and accessories, which incorporates wood type and vintage advertising images from the Hamilton museum’s archives.

“It’s no Missoni—we didn’t crash the Web site when it went live,” Moran notes. But he’s heard that the Vintage Varsity items have sold well. “Target really the saw the value of things that feel analog,” he adds. “Credit Target and its design team for taking some mid-century art and making some stunning clothing from it.”

All this might make Moran and his two employees sound as though they’re spiritual descendents of Ned Ludd. Not true: Blinc has digitally designed numerous logos, Web sites, brochures, and other marketing materials for clients including 3M, Wells Fargo, St. Paul–based med-tech firm Minnetronix, and Minneapolis’s Blue Plate Restaurant Company.

This diversity does allow Moran to pursue projects where commerce and art intersect. Like letterpress, the Twin Cities poster industry—it has become more than just a “scene”—has flourished, and Moran has found a market for his poster designs both for commercial clients and among collectors. A year ago, he says, about 80 percent of Blinc’s work was corporate, with the remainder comprising poster design and letterpress. Now the latter makes up about a third of his shop’s revenues. Also part of his diverse income base: Moran teaches a course on the history of printing and typography at the University of Minnesota, and leads an annual three-week educational trip to two European typographic museums, the Gutenberg Museum in Germany and Tipoteca Italiana in Venice.

Robert Stephens, chief technology officer at Best Buy Company, who began working with Blinc in the mid-’90s when he was starting the Geek Squad computer repair service, praises Moran for creating work that’s not meant to be “disposable.” Stephens particularly admires the brochure Moran created for the Geek Squad that could be assembled into a model of a Squad VW Beetle. Not something people would discard, Stephens says, who has even seen it used as a prop on The Office.
“If Steve Jobs had to work with a graphic designer,” Stephens says. “Bill would pass muster.”

Moran calls the Geek Squad car-brochure “paper engineering,” and sees design as creative problem solving for businesses. And those solutions, he suggests, are rooted as much in the past as the future. (A few years back, Moran picked up from Minneapolis-based Lutheran publishing house Augsburg Fortress a supply of long-unused wood type, which he keeps and uses at his studio.)

Blinc itself is moving into the future by moving away from its old home in the Northwestern Building. As 2011 becomes 2012, Moran will take over space inside Big Table Studio, the new poster work space on the first floor of Lawson Commons. The space may not have the magic of “the penthouse,” but it will save Moran some rent and equipment costs. And no worries: He’s bringing his wood type with him.