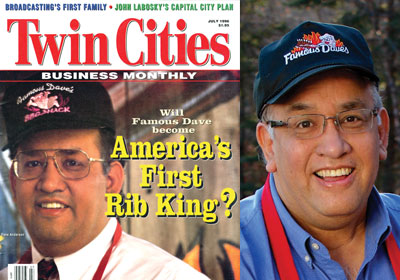 Where Are They Now? Dave Anderson

Barbecue visionary Dave Anderson may have started out in Wisconsin, but his ribs have gone global.
August 05, 2013

Even at the beginning, “Famous” Dave Anderson recalls telling customers, “I’m building the world’s best rib joint!” As the founder of Famous Dave’s of America, Inc., Anderson says he has frequented “most every barbecue joint in the country,” learning from the best pit masters nationwide to craft his award-winning recipes.

He has been retired from his post as chairman for nearly a decade but he still makes TV commercials, guest appearances, and is the self-described “company flag-waver.”

TCB profiled him two years after he opened his first Famous Dave’s restaurant in Hayward, Wisconsin in 1994. Up to 5,000 barbecue lovers region-wide flocked to the small town every week, and he soon opened his second location in Minneapolis’ Linden Hills neighborhood. The company went public in 1996 and is traded on NASDAQ (DAVE).

Anderson’s flair for barbecue took root at a young age when his father, originally from Oklahoma, would bring home ribs slathered in various sauces.

“I always knew growing up that our family was different, because other kids’ parents would take them to burger joints while my family was eating barbecue,” Anderson says.

He recognized there were regional variations in barbecue sauces around the country; he began experimenting with sauces, modeling them after tastes of places he visited. One sauce, Rich & Sassy, mirrors flavors he found in Memphis, and in 1995 it won first place in its division at the American Royal World Series of Barbecue as the best barbecue sauce in the country.

“No matter what I was doing, I was eating, drinking, thinking barbecue,” he says. “I was always playing with a recipe.”

His company has been honored with almost 700 awards for its ribs, sauces, and restaurants. Anderson’s latest book, Famous Dave’s Barbecue Party Cookbook: Secrets of a BBQ Legend, hit the shelves in June.

With next year marking the company’s 20th anniversary, the restaurant chain continues to expand, with almost 200 locations in 34 states, plus joints in Winnipeg and Puerto Rico.

“I believe that Famous Dave’s is a global brand,” Anderson says, noting more international expansion is on the horizon. He believes his success lies in the recipes, which he has been working on for 25 years. “I’m still developing new recipes every week,” he adds. “I’m still perfecting my craft.”