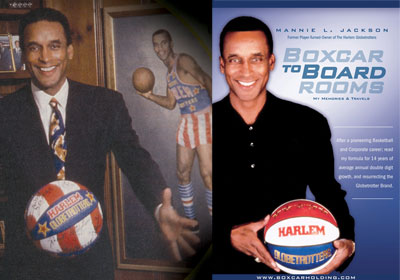 Where Are They Now? A Look at Mannie Jackson

Two decades ago, Honeywell executive Mannie Jackson bought the Harlem Globetrotters. Now he’s written a book about his life.
May 03, 2013

Perhaps the only Twin Cities executive to have been born in a boxcar, Mannie Jackson was noted in these pages in March 1994 for buying the Harlem Globetrotters with his partner, Dennis Mathisen, becoming the first African American to own a major sports organization outright.

Jackson had played for the Globetrotters in the early 1960s and bought the team with the intention of shutting it down, thinking it had outlived its usefulness. He thought he would license Globetrotters-brand products and through a book or a movie, tell the segregation-era story of how great athletes had been trivialized as clowns and entertainers.

After watching the team play, however, he had an epiphany. “I knew how many great ballplayers and how many basketball fans there were around the world who would appreciate a championship-level barnstorming team,” Jackson says. “It took two or three years to get it right, and then it took off.”

Jackson had never expected to leave Honeywell, where he had worked since 1968 and risen to senior VP, or to leave Minnesota. “I bought the Globetrotters with the idea of setting up a company I could do on the side and keep my day job,” he says. But the team grew too fast, and he had to choose.

Under his watch, the Globetrotters experienced an average annual revenue growth rate of 14 percent over 14 years. Over time, Jackson bought out Mathisen and the other investors. By 2006, when he sold it, the team they had bought for $5.5 million was valued at about $100 million. Jackson remained non-executive chairman until two years ago, and continues to hold a 20 percent stake. “Fifteen years is a long time to run, and I ran hard for 15 years,” he says.

He’s proudest of the good the team did, regularly visiting classrooms and hospitals around the world and contributing more than $25 million to feed, house, educate, and clothe people in need.

He moved to Phoenix in 1994, but his heart remains in Minneapolis. “We’ve lived a number of places but the majority of the people we are still close to are from Minnesota,” says Jackson, who has two daughters and an adopted son with wife Cathy.

At 73, he looks at deals every day and oversees his philanthropic family foundation, which has given away more than $20 million.

His 2012 book, Boxcar to Board Rooms, recounts his rise from abject poverty; as a small child, he lived with up to 12 family members in a railway boxcar in Missouri, then became star point guard at the University of Illinois before his successful business career, which includes service on the boards of several Fortune 500 companies, including Jostens, Reebok, Ashland, and what is now Stanley Black & Decker.

“Basketball was the magic carpet that changed the way people saw me as an individual,” says Jackson. “It got me into college and afforded me the network and connections that I could never have gotten otherwise.”