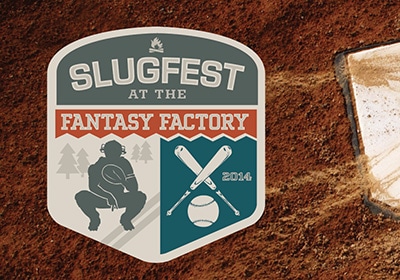 What’s Behind The Success Of The Twins Fantasy Camp?

How an Iowa farmer turned the Twins Fantasy Camp into a booming business.
April 01, 2014

Stan Dickman is Mr. Roarke in real life; he makes adult wishes come true. As owner/operator of the Minnesota Twins Fantasy Camp, the smooth and charismatic Dickman sells grown men, and some women, the chance to rekindle childhood dreams. In exchange for $4,195, they spent eight days playing baseball in Twins pinstripes and hanging with former pros such as Kent Hrbek, Frank Viola, Tony Oliva, Bert Blyleven and Rod Carew. The Twins outsource the fantasies played out on the meticulously manicured fields and in the cavernous clubhouse of their Fort Myers, Fla., spring training facility to Dickman’s company, Yuratwin-Ultimate Sports Adventures.

Since he bought the business six years ago, Dickman has transformed the Twins’ camp from a middling venture on the verge of extinction to a reasonably lucrative enterprise. He has more than doubled participation, from 49 campers in 2008 to a record 131 this past January. Yuratwin is basically a one-man show run by Dickman, who has two decades of experience in human resources and another decade in sales and marketing. Dickman’s investment in enhancing the camper experience has paid off in nearly 70 percent repeat customers, plus modest profits. He has also won the Twins’ trust—the team this winter renewed his annual licensing agreement for two years. Dickman’s approach has pumped vitality into the Twins’ dreamworks.

Wide Awake on The Field of Dreams

It’s the Friday morning of camp, and Stan Dickman sits in what is the manager’s office during spring training, a glass-walled room overlooking the trainer’s area, where aging men nurse sore muscles. Dickman is a fit 58, a sometime catcher still able to squat behind home plate, with gray creeping into his neatly trimmed beard. In lieu of a white suit, he sports a blue TC cap, red windbreaker with the Twins logo, and pinstripe pants. His duties are non-athletic—patrolling the playing fields, organizing evening banquets and chauffeuring pros from the airport. A Twins fan since the Washington Senators moved to Minnesota in 1961, he attended his first fantasy camp as a player in 2002, came back four times and then bought the business in 2008.

“The baseball’s important,” he says. “But by Tuesday it’s the esprit de corps of the camp that makes the experience.” (Because of renovations at Fort Myers’ Hammond Stadium, where the camp usually takes place, Dickman held this year’s camp at the Red Sox’s former training facility across town.)

The campers—attorneys, physicians, restaurant owners, mechanics and financial advisors back home—divide into 10 teams (up from four when Dickman took over), coached by two former pros. The schedule includes two seven-inning games a day, plus evening dinners—highlighted by kangaroo courts with the honorable Bert Blyleven presiding. The former and fantasy players eat, shower, play, carpool and drink together, which breaks down talent class barriers. Dickman stresses to his pro staff the importance of interacting with campers, who leave camp elated—Tom Brunansky praised their swing, Frank Viola greeted them by name, Tim Laudner regaled them with stories in the bar—and eager to return. “Picking the right people to be on the pro staff is key,” Dickman says. “I told Bert Blyleven, ‘These people may be campers to you, but they’re customers to me.’ ” 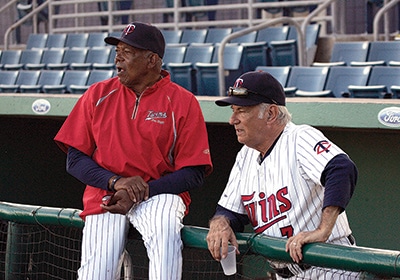 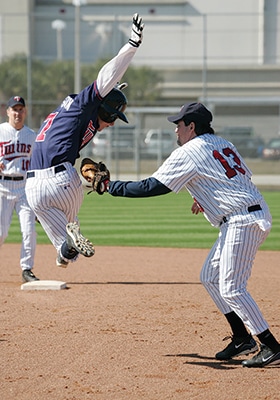 The Twins outsourced their first fantasy camp around 1991. It shut down for a short period in the ’90s until it was taken over by a company called Sports Adventures, which also operated the Red Sox fantasy camp. When operator Larry Marino’s wife became ill and he couldn’t give his full attention to the Twins camp, Dickman approached the team about buying out Marino. Twins President Dave St. Peter recalls he was impressed by Dickman and offered his support. The Twins also support Dickman’s drive to grow the business—both parties profit as the number of campers grows—but St. Peter thinks there are natural limits to the camp’s potential, because the experience must remain intimate for campers.

Perhaps it’s not surprising that Dickman, a former human resources manager, places a premium on personnel. His first move when he took over was to cut loose former players from other teams and bring in fan favorites with Twins roots. He has since filled out his roster of 22 pros with Twins legends such as Hrbek, Viola, Brunansky, Laudner, Rick Aguilera, Greg Gagne, Mickey Hatcher and Dave Goltz. “Getting Kent Hrbek to leave Bloomington and get down to Florida might seem easy, but it’s not,” says St. Peter. “That happens only if Kent trusts Stan.”

Dickman understands his customers and what they want, having been one himself for five years. Though campers hail from 16 states and Canada, the majority are Twins fans, so Dickman has stamped the camp with a Minnesota flavor, from the pro staff down to the Caribou coffee served in the cafeteria. He enhanced the camp experience by adding more games to the schedule, upgrading the uniforms (campers get a quality home uniform, along with an away jersey with their name on the back, and socks, belt and cap), and fashioning plaques for player awards (Gold Glove, Cy Young, MVP, etc.).

He places a daily gift, such as a Twins flask, camp T-shirt or team photo, in the campers’ lockers. First-year campers get a Louisville Slugger engraved with their name. He brought in a cook to replace cold meals with hot breakfasts and lunches. That all adds up to a five-star experience that pleases both customers and staff. “Stan makes it very clear that everybody is going to be satisfied—the campers and the pros,” says Twins television play-by-play man Dick Bremer, who has attended 15 camps. “If you do that, you’re going to build something.”

Dickman’s attention to detail has contributed to his ability to send campers home happy. “It’s different here,” says John Torniero, a camper from East Haven, Conn., who has attended several other fantasy camps. “It’s so well-organized.”

Dickman’s extroverted nature also suits the camp director role. He hasn’t met a microphone he doesn’t like, whether it’s emceeing the awards banquet, manning the public address system for the pro-rookie game or singing both parts of a Julio Iglesias-Willie Nelson duet at karaoke night (a feature he added this year). “Stan’s got the personality,” says Jay Harris, his long-time administrative assistant, who worked with previous directors. “He’s everybody’s best friend.”

But those enhancements don’t come cheap. Nor does the addition of more pro staff. This year alone Dickman added three (Hatcher, Goltz and Gagne) to keep up with the increasing number of campers. Dickman’s primary overhead is hotel and buffet banquets, followed by pro staff salaries and travel expenses, and a licensing fee to the Twins that includes use of their Fort Myers facility. Other costs include liability insurance, clubhouse and administrative staff, uniforms, equipment, baseballs, daily gifts and awards. So Dickman’s willingness to invest in customer satisfaction eats into his bottom line.

Dickman won’t divulge his bottom line, but says he clears a small profit but cannot earn a living running the camp. That revenue comes from the land he farms in Le Mars, Iowa, where he lives. But his hobby business yields vacation-type job satisfaction. “I’ve got the best job in the world,” he says. “I work 50 weeks of the year in a T-shirt and jeans. I get phone calls from Rod Carew, Bert Blyleven and other former pros.” He can write off his time playing in senior baseball tournaments as recruiting trips. And he spends eight days in Florida every winter. Dickman may not be making a fortune, but he’s working the fantasy year-round. 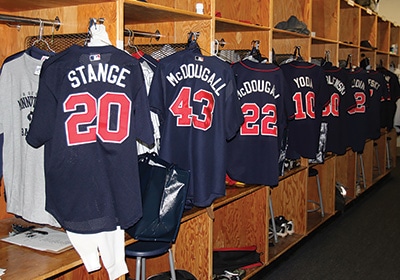 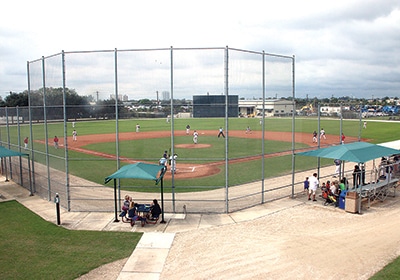 This year’s camp took place at the old Red Sox player facility due to construction at Hammond Stadium.

The Business of Fantasy

It used to be that virtually every MLB team offered a fantasy camp; now only 21 remain. Many are outsourced operations Ã  la the Twins, which have done so since their fantasy camp began. (Dickman is the third to run it.) The more campers Dickman draws, the more money flows to the Twins based on their license agreement, but the amount is a miniscule portion of the team’s overall revenue stream. It may be nuisance money, but there’s value in 131 campers who come home each year spilling stories of their experience to family, friends and co-workers. “The players and campers become ambassadors for the Twins,” he says. “The benefits go beyond dollars and cents.”

Even with the record number of campers this year, St. Peter says his staff’s resources are best spent on the 2.5 million customers who buy tickets at Target Field. That makes him willing to make an outsider an ambassador for their brand. “If someone has a bad experience at the camp, they’re not going to be mad at Stan,” St. Peter says. “They’re going to be mad at the Twins.” Which raises an obvious question—why don’t the Twins run the fantasy camp themselves, given the variables? St. Peter says it’s a relatively simple calculus: The time required by the organization would not be justified by the revenue the camp generates for the team.

And he says negative reactions don’t often happen. Dickman has succeeded in keeping customers happy and growing the camp. That keeps the Twins happy. “You obviously have to have a high level of trust,” St. Peter says. “We have a great deal of confidence in Stan delivering the experience he says he will. I wouldn’t do it with anyone other than Stan.”

So, for as long as he’s willing, the fantasies of Twins fans are safe in the hands of Stan Dickman.

John Rosengren is the author of The Fight of their Lives: How Juan Marichal and John Roseboro Turned Baseball’s Ugliest Brawl into a Story of Forgiveness and Redemption. He attended the Twins fantasy camp in 2014 on assignment. 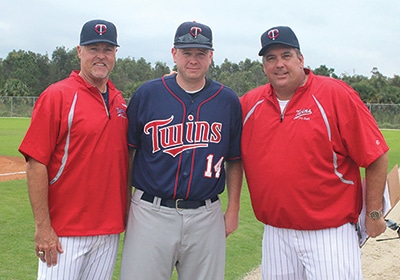 Interaction with Twins greats is guaranteed, and we’re not just talking about the mascot. Above, camper Tarron Borgerson poses with coaches Tom Brunansky and Kent Hrbek.