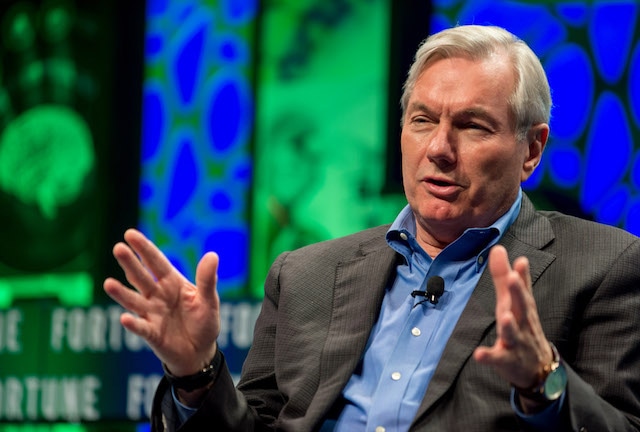 What Michael Osterholm Has Learned One Year in to the Pandemic

The director of the University of Minnesota’s Center for Infectious Disease Research and Policy on what was different about this coronavirus and what might be coming next.
By Greta Kaul
February 02, 2021

A month ago, the world marked the one-year anniversary of learning about Covid-19, at that time a still-unidentified respiratory virus causing pneumonia in patients in Wuhan, China.

In the weeks that followed, Minnesotans watched reports of lockdowns, deaths and overwhelmed hospitals from afar as the virus wrought tragedy, first on the other side of the world, then closer and closer.

“I have no doubt it will travel across the world, including the United States,” Michael Osterholm, the director of the University of Minnesota’s Center for Infectious Disease Research and Policy (CIDRAP) told MinnPost in a story published a year ago Sunday, a time when there were six documented cases of the virus in the U.S. and it was becoming evident that there was little Minnesota could do to stop the virus from coming here.  “It’s kind of like controlling the wind. You can’t.”

A year later,  Minnesota has seen more than 24,000 hospitalized and more than 6,000 dead due to Covid-19. We caught up with Osterholm again to talk about what we’ve learned — and haven’t learned — over the past year. This interview has been edited for length and clarity.

MinnPost: As soon as we started hearing about coronavirus, the most obvious thing to do was start comparing it to other pandemics, as well as other viruses that turned out not to be pandemics. So I guess my first question for you is how did Covid-19 end up being like, or unlike, other viruses we’ve seen before?

Michael Osterholm: In the first three weeks, there was enough information to make us very concerned [but] I came into it with a built-in bias of, if it’s not influenza, that’s a good thing, because that’s the worst. Having worked on SARS and having worked on MERS [both coronaviruses that caused outbreaks originating in Asia and the Arabian peninsula, respectively], I understood [it to be a] good thing [that it was a coronavirus], because people wouldn’t get infectious until the fifth or sixth day of their illness. We could stop that.

But then, we were getting information that people were transmitting early — long before they got  clinically ill, let alone in the earliest days of clinical illness — that began to tell us, wow, there’s something different here. And then as we talked to more people on the ground in Wuhan, it was clear that there was tremendous transmission in the community, it had showed up in Hong Kong, it showed up in Singapore and we knew this is now an infectious agent that’s going to be impossible to contain. This is going to cause the next pandemic.

MP: When we talked about Covid-19 earlier in January of last year, you said you wouldn’t refer to a coronavirus as a pandemic agent.  What about this virus made it different from other coronaviruses?

MO: The key thing was the evidence of transmission before you became clinically ill. And that there was widespread transmission that way. You have a viral load in your throat that increases very quickly. As you’re breathing, you breathe out the virus [before you’re feeling symptoms].

MP: Another thing you were really concerned about in late January last year was preparation: you were saying we need to prepare right now. How did we do in hindsight?

MO: When [President Donald Trump] held up that summary from Johns Hopkins saying we’re the best-prepared country in the world for a pandemic, I cringed because I knew how ill-prepared we were, and yet that’s what people thought; that we would be prepared.

I knew that there would be challenges, and I mean, even to the extent in the earliest days, I wrote an op-ed in the New York Times on Feb. 24 saying this is a pandemic, wake up. In the United States, there were so many people who kept wanting to say the flu is much worse.

I heard that so many times. So it was hard in that we couldn’t get people to really respond in a manner that would really support active, proactive preparation. When you deny it’s going to be a problem, you don’t have to prepare. I think that was one of the real challenges.

MP: Were there other communication missteps that stick out to you? The mask thing has gotten pretty complicated.

MO: I surely advocate for them, but at the same time, the impact that masks have in reducing transmission depends on what you call a mask. N95 respirators are very different than surgical masks are very different than cloth face coverings are very different from gaiters. And what we’ve done is lumped them all into one category. That really isn’t helpful because in fact, N95 respirators are the gold standard, they really do have a tremendous impact on transmission, both in terms of the person who might be infected, breathing out, or the person who is breathing in the virus. We see much less protection, for example, in certain loose-fitting cloth coverings that have a material that allows air to pass right through.

What we were trying to do all along is to nuance this to be able to say we fully support this, but I want people to understand that the most important thing you can do to protect yourself is the distancing issue. So people say what do you use to go to the grocery store? Well I’m fortunate because I’m in the health care area to have an N95, but you know what the most important thing is that I do? I go to the grocery store at five in the morning as does my partner and there’s no one there. So that’s one of the things we’ve had to help try to teach people. And most people, that’s not something they want to hear.

MP: What are the big questions you still have about the virus?

MO: First of all, the whole variant issue, the issue around variants to me is very concerning and we don’t quite know where that’s taking us. I think it’s  fair to say we’re not sure what that’s going to mean.

There are three categories of the ones that concern us: one, do they cause more transmission? Two, do they cause more severe illness? Three, do they evade immune protection from either vaccines or from natural infection? The B117, the British one, is surely in those first two categories, more infections and more severe infections [scientists are mixed on whether B117 causes more severe infections but the question is being studied]. Then you get into P1 [the Brazilian variant] and you get into the South African one and at that point you really have all three categories. And God knows how many more are coming down the pike.

[Also] human immunity. I think we have major challenges trying to understand human immunity and how it relates to coronaviruses. I mean, a good example is the vaccine. I’m going to keep putting forward we should consider a single-dose approach right now with Moderna and Pfizer and that’s not popular, but when you look at the immunology of this virus and you look at vaccines, we have shown over and over again that the most robust protection from the vaccine occurs when the boosters are typically months afterwards, not two weeks, because it takes that time to mature the immune response cells from the first vaccine dose.

Even in the Johnson & Johnson study, they had much better results after 49 days than they did before. It got better. So one of the issues would be to protect more people at least partially if not quite a bit with one dose and then catch up with a second dose later.

MO: Many of us have waited for the day when we can say OK there’s only six weeks left and we’re done. We can get through this. I wake up now and wonder to myself sometimes “are we still in the third inning?” And that’s a challenge. It’s a challenge for all of us, everyone.

For many of us, the lives we’ve lived over the last year have been challenging. Before this, I used to fly 150,000 miles a year, with all my international travel for work. I haven’t been on a plane since March. I would occasionally use Zoom or something like that before. Now I spend 150,000 hours on Zoom instead of flying 150,000 miles.

Some scientists think pandemics will become more common due to factors like urbanization and globalization. Should we be prepared to do this again in two years? Five years? Twenty years?