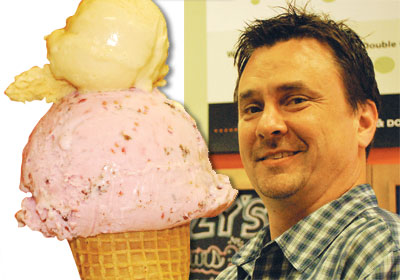 A little ice cream business with a taste for innovation.
August 11, 2010

Jeff Sommers is there, circulating among the angels, private equity investors, and CEOs of public companies and venture-backed start-ups at a cleantech conference hosted by the Collaborative in May. But he isn’t looking for funding. He wants to connect with ideas and with people who can help him put ideas into action.

Sommers (right) and his wife, Lara Hammel, own Izzy’s Ice Cream, the St. Paul shop they started 10 years ago with a second and third mortgage on their house. He calls it a “mom and pop” business that has no big expansion plans—franchising would bring a drop in quality, he believes—even though the line of customers on summer evenings frequently spills out the door and onto the sun-baked sidewalk.

Instead, Sommers says he and Hammel are continually “trying to innovate how we operate.” They see imagination as part of Izzy’s brand. Whether it’s enlisting customers to create new flavors or connecting people to Izzy’s through social media, Sommers, a former school teacher, says, “I’m always trying to address the imagination of every customer.”

RFID on the Menu

A radio frequency identification (RFID) system set up in May gives a nearly real-time reading of which 32 flavors (Izzy’s has 90) are in the dipping cabinet at any moment, and projects the results as a colorful wall menu. No more customers disappointed at the end of their wait because the flavor they planned to order ran out while servers were too busy to update the old menu board.

Designers at the Nerdery built a new “Flavor Up” Web site (flavorup.izzysicecream.com) that puts the RFID data on line. Devotees of Norwegian Chai or seasonal basil ice cream can stop by when they see that their favorite flavor is in. They can also “follow” a flavor and get Twitter or e-mail alerts whenever it’s available. Izzy’s most-followed flavor: Salted Caramel.

A Different Take on Capital

Izzy’s needs capital to innovate, Sommers says. But he doesn’t want more bank loans. “I feel like Izzy’s and my colleagues in local independent business return more value to the community”—not just in goods and services, but in increased property values—“than would justify the rate of interest that you pay on a loan.” He envisions a low- or no-interest system in which local property owners can check a box to support investment in neighborhood businesses with a set-aside of a tiny fraction of their current property taxes.

Early this year, Sommers and Hammel ditched all of their cleaning chemicals (labels said “highly corrosive” and “causes burns to skin”) and replaced them with a system from tiny Richfield start-up Zap Water Technology. By putting a small electrical charge through a weak solution of salt water, the system allows Izzy’s to manufacture two items on site: nontoxic detergent and sanitizer that return to being simple brine shortly after they’re used.

“We’ve had eight power outages at Izzy’s in 10 years, so the grid’s not reliable,” Sommers says. “I’m on the side of distributed energy.” Five years ago, customer donations helped cover a third of the $60,000 cost of an 8.6 kilowatt solar photovoltaic system. It cuts the store’s peak energy demand by about 30 percent, which also earns Izzy’s lower electricity rates whenever it’s pulling from the grid.

Aiming for No Waste

“When somebody gets an ice cream cone, there’s no waste,” Sommers says. “It’s the most perfectly designed consummable product in the world.” To parallel that, he’s researching compostable cups and spoons, and waiting for Eureka Recycling to bring its composting program into St. Paul. (Eureka is running a pilot composting program in the Macalester-Groveland neighborhood this summer.)