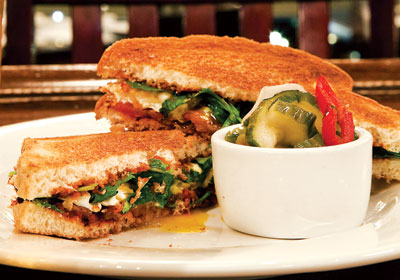 After your first bite of the grilled kofta meatballs at Saffron, they start to warm you up just a little bit. Not to five-alarm chili levels, but more like the gentle flush of wine across your cheeks. There’s a little warmth in the tomato sauce, too—something you just can’t put your finger on that makes that sauce perfect for those very meatballs.

That “something” is harissa, a North African chili paste that is one of the basic building blocks of Saffron’s pan-Mediterranean cuisine. Chef Sameh Wadi uses it to build flavors in many dishes, even those that might not say so on the menu, such as those delicate meatballs.

“Harissa works as a marinade or a finishing touch,” Wadi says. “It can be an ingredient or a dip on its own. We’ve also used it in desserts, which is not traditional at all.”

Take the grilled blue prawns. These are marinated in a harissa vinaigrette, grilled, and then tossed in the same vinaigrette again just before serving. “It’s not the heat, it’s the complexity,” Wadi says. “It’s not a spicy dish, but it has those notes. You get the spectrum of nutty, sweet, sour, spicy.”

Harissa also lends complexity and just enough heat to marinated anchovies and to a lamb shank bathed in a harissa-scented broth.

The chile-mixture is making its way onto menus around the Twin Cities. The fried egg and harissa sandwich has been a favorite at 112 Eatery since it opened its doors, and the new Pat’s Tap offers a grilled chicken sandwich (with harissa notes) on focaccia. The North African flavors, it turns out, blend well with American comfort food.

Wadi is Palestinian, so harissa is not something he grew up with, but at Saffron, he says, “any land that uses olive oil is fair game.” His kitchen uses three kinds of harissa: a dry rub that is his innovation (traditional harissa is a paste), a recipe from an Algerian grandmother that employs reconstituted dried chilis, and a fresh-chili harissa that has a livelier taste.

And the recipes themselves? “Those are top secret,” Wadi says. “I’ve been playing around with six different chilis to get an authentic flavor without getting too hot.” So that “something you just can’t put your finger on” in those kofta meatballs must remain a secret, after all.